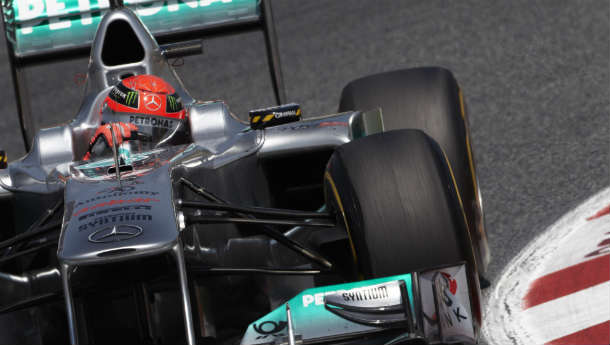 Kimi Raikkonen managed to set the fastest times in the first day of testing at the Jerez circuit in Spain. Day 2 went to Formula 1's other comeback kid, Michael Schumacher. Schumacher topped the timing charts clocking 1m 18.561s by the end of the session. What can we tell from this pace though? Well, not too much to be honest. The car the seven-time world champion was running in today's test was not the 2012 Mercedes AMG F1 car (that's only being unveiled on the 21st of February). Instead, the German driver was piloting the team's 2011 car shod with 2012 Pirellis to help him get used to tyre conditions.

The best of the 2012 cars was the Adrian Newey-designed RB8 that Mark Webber piloted. The Australian driver did set the pace early on in the test session before then dropping pace to 1m 19.184s. Webber thus brought up the rest of the field with a gap of 1.1 seconds to the leading car.


Good signs for the Scuderia Toro Rosso team when their driver Daniel Ricciardo managed to clock a sub 1m 20 sec time that put him in third. Force India's Jules Bianchi clocked in fourth fastest. Behind him Kimi Raikkonen finished clocked the fifth fastest timing. It wasn't entirely easy for the Iceman though, who had an incident at Curva Dry Sac. The Lotus E20 ran wide into the gravel, and the car was damaged on the kerbs while rejoining the track. Some quick repairs by the Lotus team meant that the Raikkonen was able to go out on track and test once again.

Two seconds down the order was Jenson Button in the McLaren MP4-27. While Felipe Massa brought finished seventh.