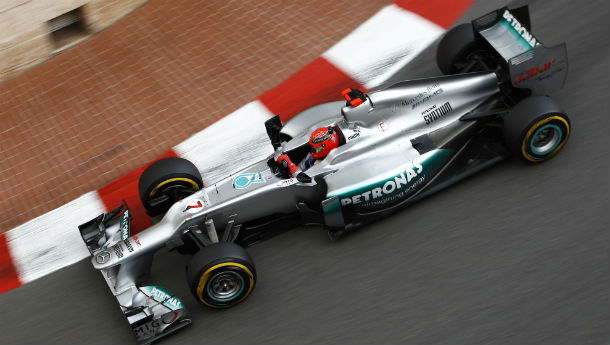 And then Michael Schumacher went fastest during qualifying. This, of course, on the back of the many rumours that his second retirement was due rather shortly, and the fact that team-mate Nico Rosberg had outperformed him during the first five races of 2012, even claiming his maiden win at the Chinese Grand Prix.

But, when Michael Schumacher was handed a five-place grid penalty for his collision with Bruno Senna at the Spanish Grand Prix, he said it would only make him more determined to do better and push harder at the Monaco GP, and it certainly has. Michael Schumacher set the fastest time of the pack with 1 min 14.301 secs. This means the German will start the race from sixth place on the grid.


The man who will be lining up at the head of the grid at Monaco is Red Bull Racing's Mark Webber. The Australian driver clocked the second fastest time of the afternoon with 1 min 14.381. Schumacher's Mercedes AMG F1 team-mate, Nico Rosberg will start the race second, after qualifying third fastest. Behind him are McLaren driver Lewis Hamilton, Romain Grojean in the Lotus, and the Ferraris of Fernando Alonso and Felipe Massa.

Kimi Raikkonen brought the second Lotus home eighth on the grid, while Pastor Maldonado (who has a ten-place grid penalty) and Sebastian Vettel round off the top 10.