F1: Rosberg tops the charts at Jerez on day 3 of testing 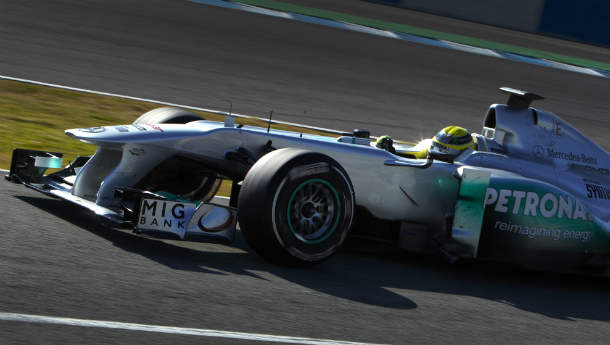 As if to prove that Michael Schumacher finishing the second day of testing at Jerez on top of the timing sheets was no fluke, Nico Rosberg managed to give the team a repeat performance on the third day of testing. Rosberg finished the day with a timing of 1m 17.613s after staying out on track for as many as 118 laps. Of course, this is not indicative of the squad's 2012 pace, as the team has chosen to run their 2011 car with 2012 Pirellis for the test session at Jerez.

Meanwhile, the fastest of the 2012 cars was the Lotus E20 of Romain Grosjean. While the Frenchman spent his first few laps trying to come to terms with the car, he then managed to clock a 1m 18.419s, which is the fastest the 2012 cars have recorded so far.


Then there was Sebastian Vettel in the Red Bull, who clocked a faster time than Lewis Hamilton in the McLaren. Jean-Eric Vergne finished with the fifth fastest time for the Scuderia Toro Rosso team.

And what of the many Spanish fans all rooting for home hero Fernando Alonso? Well, they weren't very pleased at the end of the session, we imagine. The Spaniard managed to put his car into seventh position. The Ferrari team has also said that they aren't pleased with the progress that has been made with the 2012 car so far.