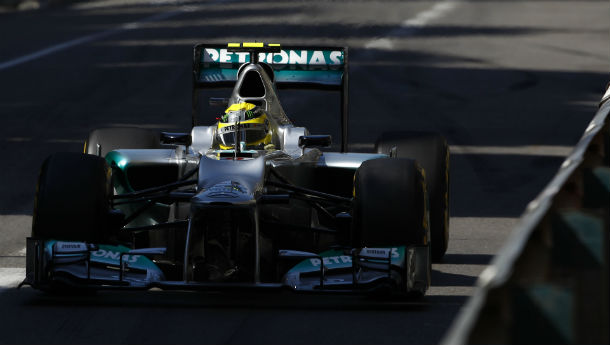 The final free practice session of the Monaco Grand Prix was also brought to a premature end. This time the cause was an accident from Williams driver Pastor Maldonado. The 2012 Spanish Grand Prix winner was involved with an incident with Sergio Perez at Portier, where he clipped across the front of the Sauber. One lap later, on the entrance to Casino Square, Maldonado lost control of the Williams losing his left rear wheel at the barriers at Mirabeau. Maldonado earned a 10-place grid penalty for his incident with Sergio Perez.

At the head of the grid, however, it was Nico Rosberg who set the fastest time with 1 min 15.159 seconds, ahead of Felipe Massa who went faster than team-mate Fernando Alonso to take second. Sebastian Vettel took third for the Red Bull Racing team, while Alonso clocked the fourth fastest time.

Romain Grosjean was the fastest of the two Lotus cars, finishing the session with the fifth fastest time, while McLaren drivers Jenson Button and Lewis Hamilton finished sixth and seventh for the McLaren team. Michael Schumacher, brought the second Mercedes home eighth fastest.