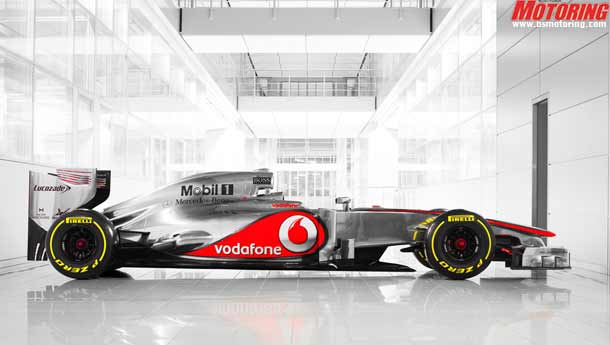 Finally the first of the serious 2012 Formula 1 challengers has been unveiled. The Vodafone McLaren team has taken the wraps off the 2012 challenger that drivers Jenson Button and Lewis Hamilton will field in the coming season of F1. Following standard McLaren nomenclature, the new car has been called the MP4-27.

McLaren described the car as more a design evolution of the MP4-26, even though this car is all new. The 2012 chassis has been revised from ground up and all the major systems have been re-designed specifically for the upcoming season. The MP4-27 features a tighter waist that has been designed to improve flow to the rear of the car, and a revised cooling system as well. The famous McLaren MP4-26 'U'shaped sidepods have also been redesigned, but this is largely because of the new FIA exhaust regulations that re-define the shape of the rear bodywork.

Given the fact that they finished second to the Red Bull team in both the 2011 driver's championship and constructor's championship, the team is keen on going one up on them in 2012.

Jenson Button is raring to get behind the wheel of this silver arrow. 'I know that the whole team is extremely proud of the MP4-27. It may look like a direct evolution of last year’s car, but we’ve analysed every area of performance over the winter and the whole car has benefited from lots of fresh thinking and new ideas in every area. I’m really looking forward to getting behind the wheel in Spain next week,' is what the Brit had to say.

'I’ve been keenly following the development of MP4-27 over the winter and I’ve been really encouraged by the results and the data that the engineers have been showing me. I think we already had a very strong base to build upon: Jenson and I won six races with MP4-26 last year and I think we’ve been able to retain all the strengths and the reliability of that design while also incorporating lots of improvements and new ideas into the new car,' said Lewis Hamilton.

Meanwhile, Hamilton also said that 'the biggest changes for 2012 are the modifications to the exhaust regulations – that will reduce the downforce and grip that we had last year, but it just puts the emphasis on the designers to try and claw some of that back in other areas. I get the feeling the MP4-27 is going to feel very new and exciting when we get to drive it for the first time.'

Team Principal, Martin Whitmarsh is also positive about the MP4-27. '... it’s a beautiful car, and one we feel is the perfect platform from which to launch our assault on the world championship,' Whitmarsh said. 'The car is pleasingly complete,' he went on.

But can it take the fight to Red Bull? Well, we'll have to wait for the first test session in Spain next week for that!