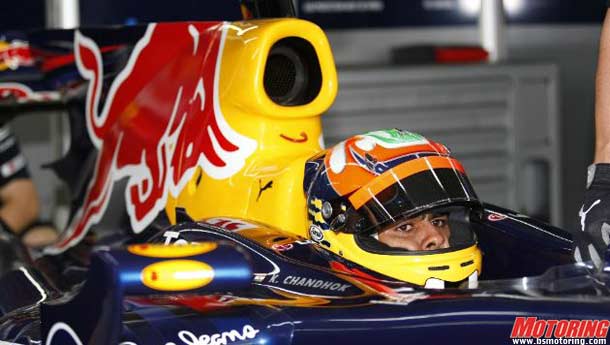 Four thousand spectators travelled to the new track for the event, which included an F1 car driving round the circuit for the first time. The event also included demonstration laps by a Formula BMW and some Korean touring cars.

Former Red Bull Junior Team member Karun Chandok drove the Red Bull Racing car, as the team‘s regular drivers were unavailable due to other commitments. “It’s a really interesting layout”, Karun said after the run. “The track’s got a good mix of corners and I think we’ll see a lot of overtaking in the first sector – there are long straights into slow hairpins. The straight after turn one and two is really long, so we may see some

good slip streaming there, like in Shanghai. From turn seven onwards, there’s a fast section of flowing corners all the way back to the start-finish line – so I think the Red Bull Racing guys will be happy in sectors two and three. It’s an interesting layout.

“Looking at the facilities, the garages and team buildings look pretty much finished and they’re big! I think teams will need to bring around 30% more furniture to finished. The track itself needs a bit more work on the asphalt and the kerbs, but the organisers think it’s all within their time-lines and are confident that it will be ready on time. And the locations nice, we’re overlooking the sea.

“There’s certainly some enthusiasm for F1 here. There are a lot of people at the event today, which wasn’t heavily publicised, and there’s a lot of media, which shows an interest. The organisers say they have sold a significant amount of tickets, so it should be a good race. It’s been great to drive the Red Bull car again and thanks to my team, HRT, for letting me complete this demonstration run.”