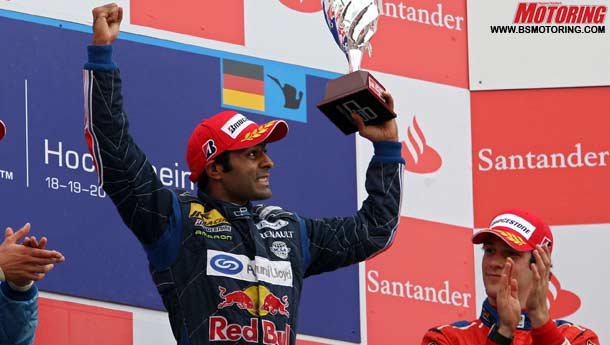 And it's happened! Karun Chandhok has finally made it to Formula 1 and we're mighty happy for him! Karun has confirmed that he will be on the Formula 1 grid for the the upcoming 2010 season and will be driving for the Hispania Racing F1 Team. The racer had this to say about his F1 career kicking off: "This is just an unbelievable feeling! I am absolutely thrilled to be able to fulfill a lifelong dream to break into Formula One. We’ve been working for so many years for this opportunity and now that we’ve finally made it, it feels a bit surreal to be honest. Only when I get to Bahrain, I think it will fully sink in that I am going to be on the same grid as World Champions like Schumacher and Alonso."


Karun went on to say, “My family and I have had a very stressful time this winter and we would especially like to thank Mr. Sunder Mulchandani, Dr. Colin Kolles (Hispania Racing F1 Team Team Principal) and Mr. Bernie Ecclestone without whom all this would have been a distant dream. My dad especially has been working really hard since August last year to make this happen. With an Indian Grand Prix scheduled for 2011, F1 is quickly becoming one of the most popular sports in India and this is a proud moment not only for me but for my country as well.” Team Principal Dr. Colin Kolles added, “We are proud to have Karun as part of our team line-up ahead of our Grand Prix debut in Bahrain. I am delighted that we can count on such a promising young talent as Karun Chandhok. As a front-runner in the GP2 series I am confident Karun will step up to the F1 challenge and contribute to a successful debut season for both him and the team.” All doubts that the team would participate in F1 this year were set straight last week when Jose Maria Carabante announced he was taking full ownership of the team and engaged Colin Kolles as Team Principal. Kolles has previously been team principal at Force India, Spyker and Midland F1 teams as well as running teams in the F3 Euroseries, DTM and for the Le Mans 24 hours.

While Chandhok is excited about his prospects in F1 this year he is under no illusion that it is going to be a tough year ahead. While all F1 teams have already begun testing of their cars for the 2010 season, Hispania Racing F1 Team will be heading to the Bahrain GP with no testing mileage under their skin. The car is being designed and built by Dallara in Italy, who have a strong history in producing racing cars including the Indycars, GP2, World Series and Formula 3 and are making their re-entry into Formula One after nearly 20 years.
Chandhok commented, “While it is true that we will be at a disadvantage to the other teams with regard to testing time, I have a lot of faith in Dallara who are building the car. I have always enjoyed a good relationship with Mr. Dallara. I remember going to visit him in 2008 before the Monza GP2 race when he said that he believed I could be in F1 soon and it’s wonderful that we have got here together. “Colin Kolles is a workaholic who has done a fantastic job to ensure that we will be on the grid at Bahrain and is excited about the challenge that lies ahead. The first few races will be tough without any testing, but at least I have been to Bahrain before so I know the circuit. I have met a lot of the engineers and senior people who all seem very motivated and I’m looking forward to working with them at the circuit next week”. Chandhok is also aware of the physical demands of the sport said, “I have been training really hard over the winter to be as fit as possible. I’ve been doing a lot in the heat in Chennai, cycling or running at 11 am at the peak of the heat. The F1 cars are particularly demanding on the neck because of the higher speeds and g-forces and I have been doing special exercises concentrating on building up my neck muscles. The first couple of races will be hard I’m sure but I’m pushing in the gym as much as I can.” This will not be the first time that Chandhok will be driving an F1 car, having tested with Red Bull Racing back in 2007. Chandhok has been a regular front-runner in the GP2 Series in the recent past with podiums and wins at legendary circuits like Spa, Monaco and Silverstone. The GP2 series has been the stepping stone to Formula One for many leading drivers including Lewis Hamilton, Timo Glock and Nico Rosberg. Prior to the GP2 series, Chandhok was the Formula V6 Asia Renault Champion in 2006, and was a regular front runner in British Formula 3 with T-Sport. He was also the youngest ever Asian Formula Champion in 2001 and youngest Indian National Racing Champion in 2000.