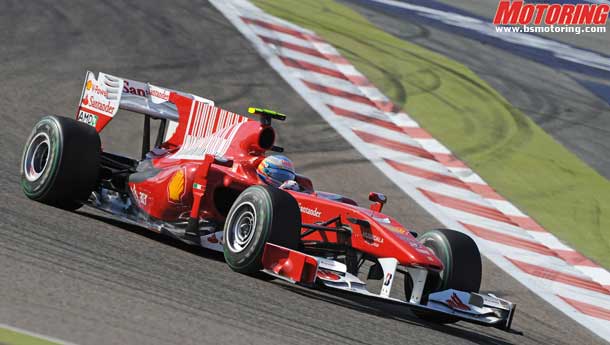 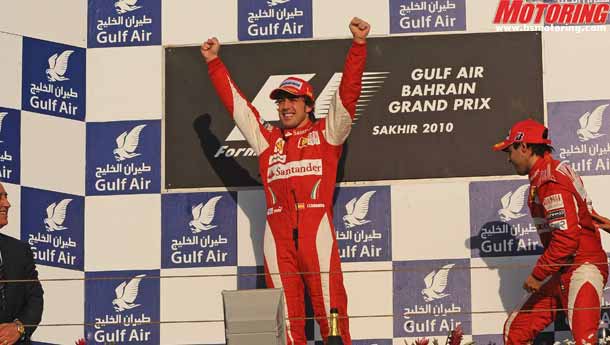 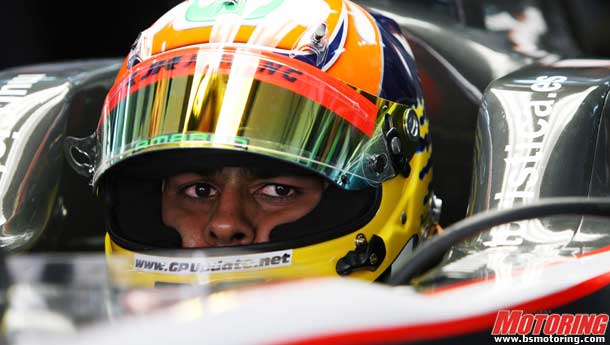 In what was the first Ferrari 1-2 since the French GP in 2008, Fernando Alonso and Felipe Massa made up the first two places of the podium at the 2010 season-opening Bahrain Grand Prix. While Massa started second on the grid and Alonso started third, it was Red Bull Racing's Sebastian Vettel who was on pole. Vettel sped away into the lead of the race when the five red lights went out. Behind him, Alonso and Massa traded places, Mark Webber lost out moving to eighth on grid behind Jenson Button, and Lewis Hamilton, Nico Rosberg and Michael Schumacher fell into place rather neatly in fourth, fifth and sixth position.

It looked like all was set for Vettel to stamp a dominant performance on the season opening race, and take the win for Red Bull. Unfortunately for him, his engine began losing power, after which it was a matter of laps before Alonso, Massa and Hamilton drove past him. In a race that was largely devoid of overtaking, this was pretty much the most action we got to see.

And what about Michael Schumacher's race return? The German qualified in seventh place, and finished the race in sixth. He was one place behind team-mate Nico Rosberg, and to be fair to the seven-time world champion, he didn't put a wheel wrong. He drove the car perfectly, and brought it home in to take eight points.

Karun Chandhok's much-awaited debut wasn't quite what he might have hoped it would be. To begin with, his weekend got off to a rocky start - his car had a hydraulic failure that the team worked through the night to fix. Then, there was qualifying, where as he wasn't able to take part in practice, he managed to finish the requisite five laps during qualifying, and then two more. Chandhok began the race from the last spot on the grid, and then went on to hit a bump that he hadn't seen before, which scuppered things for him good and proper. By the end of the second lap, we saw him climb out of his car and head back to the pit wall. Karun's team-mate Bruno Senna also retired later on in the race.

The race was not half bad for the new Lotus team. They managed to take both cars to the finish line. It wasn't a good start for the Virgin Racing team, or the revived BMW Sauber team either, with their cars failing to finish. Tough luck for rookie Vitaly Petrov who also retired in his Renault.

As for Force India? Vitantonio Liuzzi's ninth place meant two points for the team, while Adrian Sutil brought his car back in 12th position.