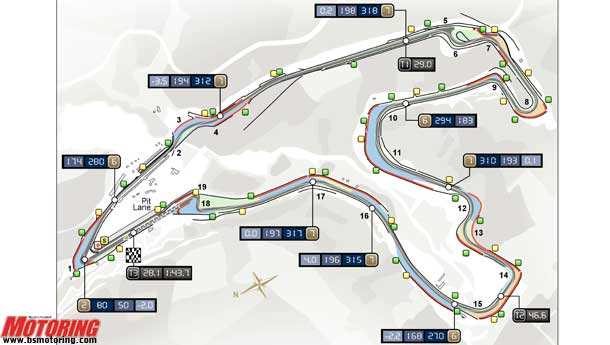 Round 13 of the 2010 FIA Formula One World Championship takes teams and drivers to the classic Spa-Francorchamps circuit in Belgium’s Ardennes region. Famed as a track that tests drivers and machinery to the limit, thanks to high-speed corners such as Eau Rouge and ouhon, Spa has developed a reputation as a firm favourite with competitors.

The circuit, located less than 10km from the hydrotherapy resort town of Spa, is a greatly shortened version of the 14km-long original, which was comprised almost entirely of public roads and used in largely unchanged form from 1950 to 1970. Safety concerns led to the track being cut to barely half its original length and in this revised format Spa returned to the Formula One calendar in 1983.

A number of detailed revisions have been made since then, and it is in this configuration that the circuit will this weekend host the 55th Belgian Grand Prix. One factor likely to feature at some stage of the race weekend is rain: the Belgian Grand Prix is noted for the fickle nature of its weather and wet conditions have contributed greatly to a number of memorable victories in adverse conditions and major track incidents. As the championship moves towards its decisive latter stages, five drivers remain in contention for the title, with just 20 points separating Red Bull Racing’s Mark Webber, leading the chase and Ferrari’s Fernando Alonso, in fifth.

CHANGES TO THE CIRCUIT SINCE 2009

• The artificial grass on the exit of turn 1 has been widened and extended to the end of the run-off area.

• A large section of the grass behind the apex kerb at turn 6 has been laid with asphalt and three bumps (similar to those in Barcelona, Valencia Monza) have been placed across the run-off area.

• A two metre wide strip of artificial grass has been laid behind the apex kerb at turn 6.

• The kerb on the exit of turn 6 has been replaced by a 50mm negative kerb and artificial grass has been laid behind it.

• The gravel behind the kerb on the exit of turn 6 has been replaced by asphalt.

• No Belgian has ever won the Belgian Grand Prix. Of the 22 Belgians to have raced in Formula One, only two have won grands prix: Jacky Ickx and Thierry Boutsen (3).

• One of the most memorable Belgian Grands Prix was in 1998, when a huge 14-car accident occurred on the first lap of the race. Seven cars wereunable to take the restart and there was a further incident on lap 25 when race leader Michael Schumacher’s Ferrari hit David Coulthard’s McLaren,losing a wheel and forcing Schumacher to retire after completing most of a lap on three wheels. Through the chaos the Jordans of Damon Hill and Ralf Schumacher emerged to take the team’s first victory, as a 1-2 finish.