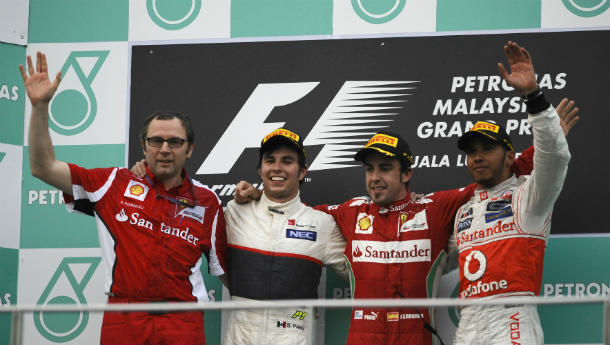 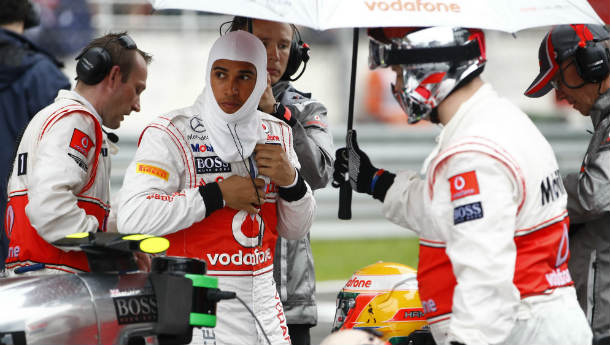 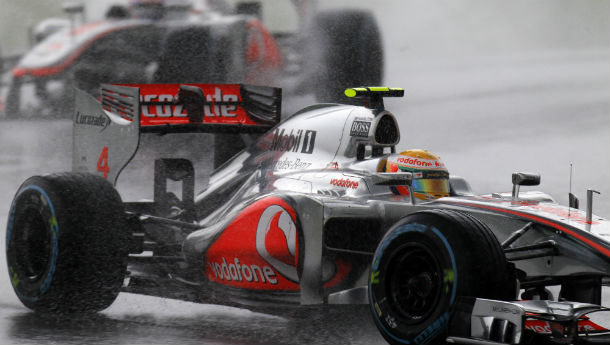 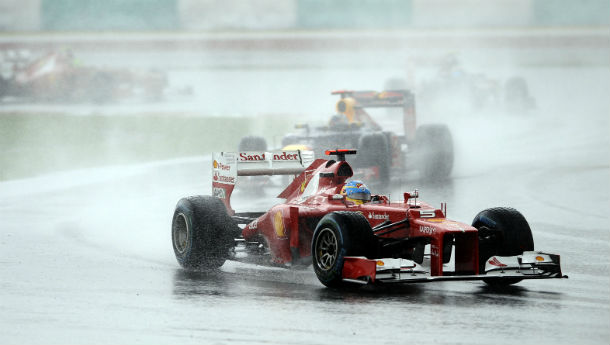 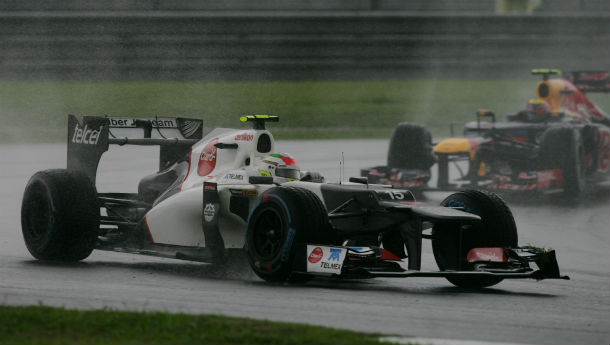 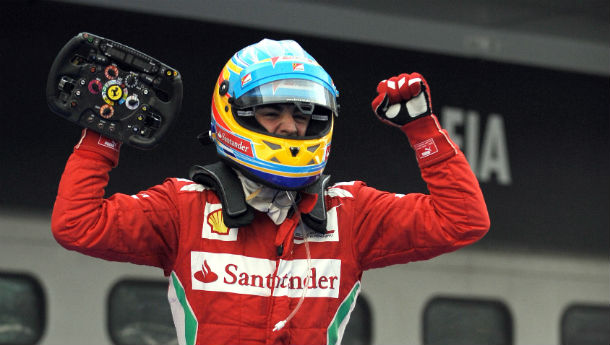 It was another one of those Malaysian GP's. Rain-soaked, red flagged, like in 2009, remember? Well, this one was a little more unpredictable though, and it turned out to be a race of upsets, something like the 2003 Brazilian GP where Giancarlo Fisichella won the race for the Jordan team. So how did things pan out at the 2012 Malaysian GP? Here it is:

It was the second race in a row where Lewis Hamilton managed to start from the first slot on the grid. Lining up next to him was team-mate Jenson Button, who so masterfully had gotten past Lewis and taken victory at the Australian GP. And third on the grid was Michael Schumacher, proving that while Mercedes does have tyre wear woes, they still have the pace needed to dice with the front runners. When the five red lights went out though, it was Lewis and Button at the head of the order, while Romain Grosjean muscled his way past Schumacher and Webber to take third. When Webber and Schumacher tried challenging the Frenchman to retake position, though, Grosjean clipped the Mercedes' front wing. Result? A spin that dropped both cars out of the top 10.

How the race was red-flagged on Page 2>>

The red flags come out

With the rain continuing to pour, the drivers had to make an important tyre choice - either gamble and stay out on intermediates, or pit for wet tyres at once. Button decided that the full-wets were the way to go, while Lewis stayed out an extra lap, before being called in by the McLaren team to make the switch as well. Hamilton managed to retain the lead though. Elsewhere, there were cars going off track - Romain Grosjean in his Lotus being one of them. And while it was race over for Grosjean, Charlie Whiting and the FIA decided it was time to bring the red flag out.

What happened at the restart on Page 3>>

The order behind the safety car was somewhat unusual. Hamilton had managed to retain the lead, while Sauber's Sergio Perez was second on the grid (he'd pitted and changed to full wet tyres very early on during the race). Another top-10 surprise was Narain Karthikeyan in his HRT. Mark Webber in the Red Bull was third on the grid, pursued by Fernando Alonso and Red Bull team-mate Sebastian Vettel.

How the McLaren's lost the race on Page 4>>

With the track rapidly drying out, it was time for intermediate tyres to come back onto cars. When Lewis pitted for inters, there was trouble. The team didn't have a very smooth stop, keeping him in the pits longer than usual with a rear jack problem, and having to stop him from leaving the pits while traffic went past. This meant Fernando Alonso in his Ferrari managed to go through to take the lead, Perez following in the Sauber, while Hamilton slotted into third. Further down the order, Narain Karthikeyan was battling Jenson Button for track position, and clipped the McLaren driver's front wing. Another pitstop for Button, then, and race lost for the McLaren team.

How the Sauber stalked the Ferrari on Page 5>>

While Fernando Alonso had a 7.7 second lead ahead of Sergio Perez, who in turn had a 7.7 second lead to Lewis Hamilton, things weren't going to stay that way for long. With each passing lap, the Sauber was eating away at the timings, narrowing the gap down to the Ferrari up ahead. With the gap down to 2.9 seconds, it was time for Perez to try and make a move. However, there was a radio message from the Sauber crew telling Perez that they needed the grid position and to play it safe. Well, soon after that the Sauber ran wide, going off track and then rejoining the race with a long gap to the Ferrari. Then, it was just the run to the chequered flag.

And that's how the day ended at Malaysia - Fernando Alonso first for Ferrari, Sergio Perez second for Sauber and Lewis Hamilton third for McLaren.