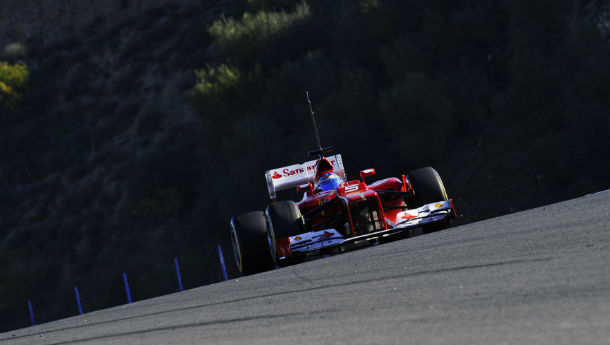 The first round of testing at Jerez has been something of a mixed bag for Ferrari. They spent the first three days coming to terms with the radical F2012, and probably showed some of their true pace on the final day of testing. Fernando Alonso took the F2012 to the top of the timing sheets when he set a timing of 1m 18.877s. This was the second fastest timing set by a 2012 car in the four days of testing at Jerez.

The only driver to go quicker than Alonso in new machinery was Romain Grosjean in the Renault E20, with a timing of 1m 18.419s on the third day of testing.


While Alonso wasn't able to better his timing after his Ferrari struggled with hydraulic trouble, it was Jean-Eric Vergne who took second fastest on the final day, with a 1m 19.597s in the Toro Rosso. Then it was double world champion, Sebastian Vettel who clocked a timing of 1m 19.606s in the Red Bull, ahead of Lewis Hamilton in the McLaren MP4-27.

Jarno Trulli might have only managed the 9th fastest time in the Caterham F1, but he was over the moon, describing it as one of the best ever first test sessions he's had in his fairly long career in Formula 1.

Back to Ferrari, though. Is the Scuderia happy with their pace so far? Well, not entirely. To begin with, Pat Fry, Ferrari's technical director said the team wasn't where they hoped to have been in the first test session of 2012. Fernando Alonso also declared that his practice times meant nothing, while stating that Ferrari hoped to be in better shape for the next round of testing at Barcelona.

What we are looking forward to at Barcelona, is the MGP W03 (if that's what they're going to call it) which will make it's debut at Catalunya. Seeing where the silver arrows slot in among the rest of the 2012 grid will give some indication of its pace.