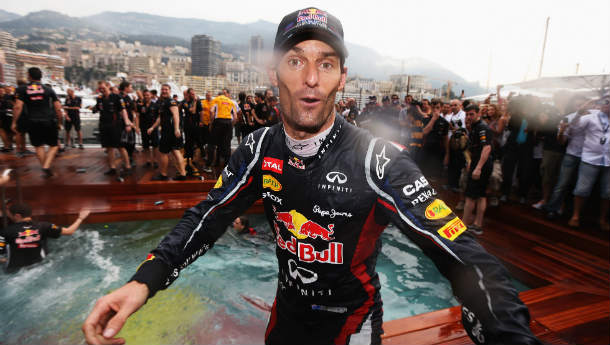 The Monaco Grand Prix was the sixth race of the 2012 Formula 1 calendar, and Mark Webber became the sixth different winner in as many races, when he won the race from pole position. Webber had set the second-fastest time in qualifying, while Michael Schumacher had clocked the fastest time during Q3. However, Schumacher's five-place grid penalty due to his incident with Bruno Senna at Spain, resulted in the seven-time world champion starting sixth on the grid.

When the five red lights went out, Mark Webber made a good start with Nico Rosberg slotting into second behind him. Ferrari's Fernando Alonso moved across the track, and while Schumacher tried to go around the outside of the melee, he soon found the black and gold Lotus of Romain Grosjean hurtling into him. Michael then lost places and rejoined the race in eighth position.


While the battle was continuing up ahead, with Mark Webber, Nico Rosberg, Fernando Alonso and Sebastian Vettel all leading the race at some point after their pitstops, behind, Michael Schumacher found himself bottled up due to the Lotus of Kimi Raikkonen. Kimi's car was struggling with tyre wear issues. After the pair pitted though, it was Schumacher who came out ahead in seventh position. And just when it looked like his fortunes were changing, Michael had another spot of bad luck. His car developed a fuel pressure problem and the German driver dropped down the order, eventually retiring from the race.

Meanwhile, it was Mark Webber who took his second victory at the Monaco Grand Prix, after his win here in 2010. Nico Rosberg finished second for Mercedes with Fernando Alonso in third.