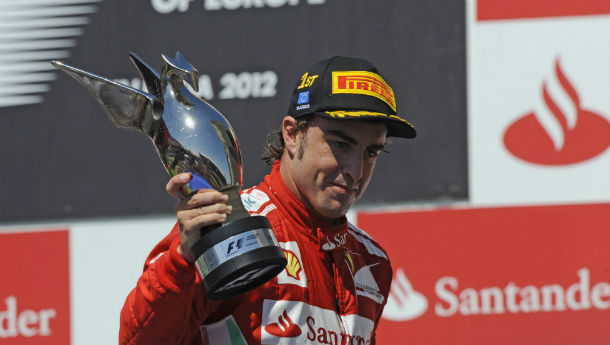 They say that overtaking isn't possible at Valencia, but things didn't quite turn out like that at the 2012 edition of the race. The European Grand Prix ended up being one of the most exciting races of the 2012 season with plenty of overtaking, a healthy amount of yellow flags, a safety car period and a few critical crashes.

When the five red lights went out, it was Sebastian Vettel at the head of the grid, making a good start from pole position. Hamilton held his place but Grosjean made a move and overtook Maldonaldo on the first lap itself. The Ferraris of Alonso and Massa made great starts, Fernando moving up to eighth on the very first lap.

At the head of the field, Vettel kept extending his advantage. A large group of cars had piled up behind Hamilton but none of them seemed to be making any moves. Grosjean kept pounding the back end of Hamilton's Mclaren and finally made a move on lap 10 to take second place. The race seemed to be moving at a steady pace with Vettel leading by a decently large margin. At the end of lap 16, after the first round of pit stops, a large pile of cars lined up behind Schumacher's Mercedes (yet to stop). Alonso moved up to fourth place clearing the entire bunch and pointing his nose towards the Mclaren ahead of him.

It seemed to be a normal, steady race till, on lap 27, John-Eric Vergne tried to overtake Heikki Kovalienen's Caterham. He'd almost gotten through till he swerved right at the last minute, puncturing both driver's tyres and damaging the Caterham's suspension. Both car's left a trail of razor sharp, carbon fibre debris on the track and the safety car had to be called out on Lap 29. This changed the race quite significantly and closed up the field.

The Silver Mercedes SLS Safety Car turned to the pits at the end of lap 33. Vettel got away cleanly but Alonso made a move on the outside of turn 2 and took second place away from Grosjean. Starting from eleventh he'd moved up to second place. And things only got better from there on as Vettel stopped on the side a couple of laps later due to an alternator failure. This left Alonso, Hamilton and Raikkonen leading the rest of the field.

As the race progressed, Hamilton started slowing down and Raikkonen finally made a move stick on him on lap 55. By this time, Alonso had already opened up a healthy enough gap. Maldonado (P4 at the time) quickly caught up with Hamilton and tried to go past him at turn 12. Hamilton moved to the edge of the track and Pastor tried to go around him. Due to a lack of traction on the outside though, he ran nose first into Hamilton's Mclaren, forcing him into the barriers. Maldonado returned to the pits with a broken wing and finally finished the race in tenth place. He gave up what was definitely going to be a podium finish. It must be said that he learnt the importance of being patient in Formula One, because had he backed down, he would have certainly passed Hamilton (who was struggling with his tyres) on one of the other parts of the circuit.

Alonso crossed the finish line in first place in front of his home supporters, with Spanish and Ferrari flags flying high. He was ecstatic on the podium with a tear or two trickling down his face, the emotion clearly having cought up with him. Raikkonen took the 2nd place and Micheal Schumacher took to the podium for the first time since his return to the sport.

Alonso later went ahead and announced that this was his "Best win ever". You can't really argue with that, on a day when he was least expecting it, on a day when his rivals faltered, in front of his home crowd, starting from 11th on the grid, with a sea of red in the grand stands, to be the only one this entire season to have 2 wins under his belt. on Sunday evening, it must be a special feeling to be Fernando Alonso, a very very special feeling.