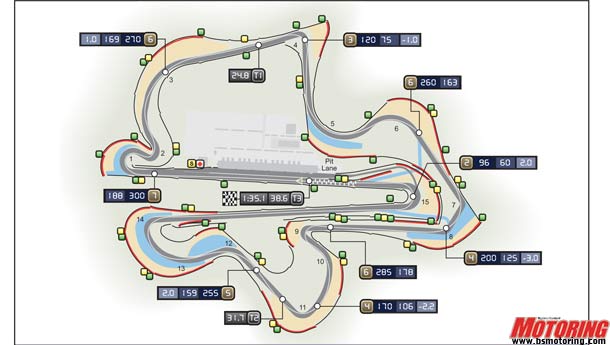 A fixture on the Formula One calendar since 1999, The Malaysian Grand Prix, held at the Sepang circuit, heralded the start of a new era in the construction of Formula One ‘super facilities’, built from scratch, with a clean sheet of paper for circuit design and often with dramatic architecture for circuit buildings. Located 85 kilometres from Malaysia’s capital, Kuala Lumpur, Sepang was purpose-built over 18 months from 1998-99 to bring Formula One to the country and create a ‘landmark’ F1 venue. The likes of the Shanghai International Circuit, Istanbul Park, the Korea International Circuit and the new-for-2011 Jaypee International Race Circuit in New Delhi, India, have all followed the model established by Sepang. Its design and construction, on a former 260-hectare oil palm plantation, was overseen by German architect Hermann Tilke, and over more than a decade, Sepang, which this weekend hosts round two of the 2011 FIA Formula One World Championship, has become noted for high-speed racing coupled with high humidity virtually certain to bring heavy downpours during the race weekend. The humidity levels, coupled with ambient heat likely to exceed 30deg C, present an annual challenge that requires drivers to pay meticulous attention to their physical preparation. The unpredictable weather conditions, meanwhile, constitute an equally demanding on-track challenge. Sepang’s high-speed nature is expected to allow teams to develop a clearer understanding of the new ‘Drag Reduction System’ moveable rear wings, introduced with the intention of promoting overtaking opportunities. DRS, coupled with the return of KERS (Kinetic Energy Recovery Systems) for teams opting to use them, should bring further unpredictability to the race weekend. Malaysia’s Formula One involvement is increasing. Petronas – Petroliam Nasional Berhad – the country’s government-owned oil company, is title sponsor of the Mercedes GP

► Built on the site of a former oil palm plantation, SIC’s construction required more than nine million cubic metres of earth to be removed before foundations could be laid. 5000 palm trees were planted to replace those lost and improve the circuit’s environment. The track measures 22m at its widest point.

► SIC was the first of Hermann Tilke’s Formula One circuit designs. Tilke has since built all-new F1 facilities in Abu Dhabi, Bahrain, China, Korea and Turkey as well as modifying F1 circuits in Spain, Japan, Germany, and France. This year’s Indian Grand Prix will also be run at a Tilke-designed track.

► Alex Yoong remains the only Malaysian to have competed in Formula One. He started 14 grands prix for Minardi over the 2001-02 seasons, achieving a best finish of seventh at the ’02 Australian GP.

► Stewart Grand Prix pioneered a novel sponsorship arrangement with the Malaysian government on its Formula One entry in 1997. Stewart cars carried the government’s ‘Visit Malaysia’ message in place of conventional sponsorship logos.

► Sebastian Vettel will this weekend be attempting to win his fourth grand prix in succession. The reigning World Champion won the final two races of 2010 and the 2011 season-opener in Australia. Vettel has won four of the last five grands prix and has led them all.

► Kuala Lumpur, Malaysia’s capital city, was founded by Chinese tin miners in 1857 and its name translates as “muddy confluence” – a reference to its location at the meeting point of the Gombak and Klang rivers.