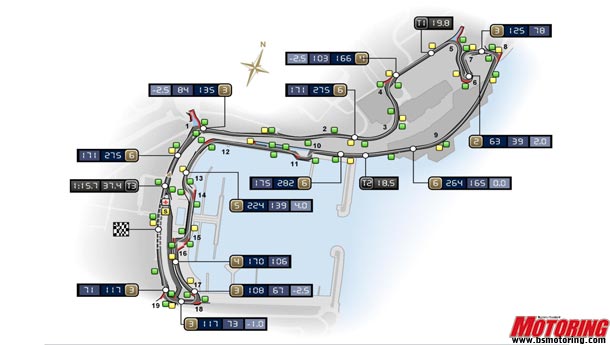 The world-renowned Monaco Grand Prix hosts round six of this year’s FIA Formula One World Championship. One of only four current races to have formed part of the original 1950 Formula One World Championship, the Monaco Grand Prix this year makes its 57th appearance on the Formula One calendar. This Monte Carlo street race can trace its origins back to 1929, before the formation of the Formula One World Championship, when an Anglo-Frenchman known only as “Williams” won the first Grand Prix de Monaco in a Bugatti 35B. This year’s grid boasts five former winners: McLaren’s Jenson Button (2009) and Lewis Hamilton (2008); Ferrari’s Fernando Alonso (2006-07); Lotus’ Jarno Trulli (2004) and Mercedes’ Michael Schumacher (1994, ’95, ’97, ’99 and 2001). Monaco’s uniquely challenging layout traditionally provides incident and drama, thanks to the bumpy nature of the track surface and circuit-lining crash barriers that allow little margin for error. New-for-2010 regulations that have banned in-race refuelling and brought in narrower front tyres are likely to make car preservation more important than ever this year.

CHANGES TO THE CIRCUIT AND CIRCUIT STRUCTURES FOR 2010

• New higher elements have been added behind the existing kerbs on the apex of turns 11 and 16.

• More debris fencing has been installed in various locations around the track.

• Several parts of the circuit have been resurfaced. The pitlane surface is all new, as is the stretch from Ste Devote corner to the junction of Avenue de Monte Carlo. Also re-surfaced are sections from Place du Casino to the Tunnel du Portier entry and from the tunnel exit to the chicane.

• Although the 1950 Monaco Grand Prix (won by Juan-Manual Fangio, for Alfa Romeo), formed part of the inaugural Formula One World Championship, financial and regulatory difficulties in subsequent years meant it was not staged again until 1955. That year’s Monaco Grand Prix, the 13th, was won by Maurice Trintignant, for Ferrari. It has remained a fixture on the Formula One calendar ever since.

• While the Monaco circuit’s fundamental character has been retained over six decades, the track layout has evolved several times. Key developments include: 1973, swimming pool section included; 1976, two new chicanes at Sainte Devote and La Rascasse; 1986, widening of the circuit at the ‘Nouvelle Chicane’; 1997, redesign of the swimming pool section to create the Louis Chiron bend; 2003-4, revised swimming pool-La Rascasse section to allow building of a new pits’ complex.

• It takes approximately six weeks to prepare the public streets of Monte Carlo for the grand prix, and three weeks to return them to their normal configuration.

• The Monaco Grand Prix provides the backdrop for a key scene in this summer’s Hollywood blockbuster release, Iron Man 2. Cars and parts of the circuit around the swimming pool section are destroyed in a battle between Iron Man and an arch-foe.