The stock of Exide Industries slid over 8 per cent on a weaker-than-expected performance in the March quarter (Q4). The firm is also trailing its smaller peer Amara Raja in Q4 as well as in FY20 at the operating level.

The country’s largest lead acid player saw a 21 per cent dip in revenues over the year-ago quarter, largely from a sharp decline in demand from auto makers. Moreover, its inverter business has been hit in Q4, which is usually considered as a seasonally strong one, because of the Covid-19 outbreak.

Amara Raja in contrast reported a revenue growth of 1 per cent in Q4 on a better-than-expected performance in replacement and industrial segments and higher margins. The firm has a lower exposure to original equipment manufacturers (OEMs) and inverters than Exide, and thus was less impacted by the lockdown. Exide’s revenue underperformance in FY20 comes after two consecutive years of outperformance (FY18 and FY19) over Amara Raja.

The underperformance of Exide, according to Elara Capital, is because of its inverter segment, higher exposure to OEMs, and its likely market share loss in the telecom segment. 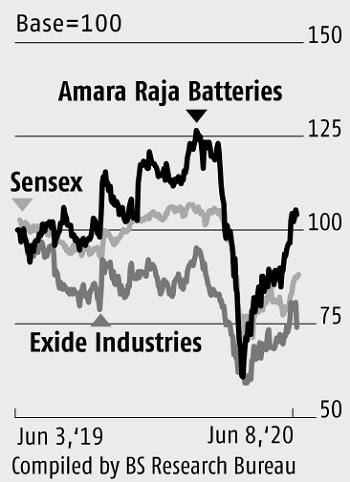 Despite the pressure on revenues, a positive for the two lead acid majors, which have a near duopoly on the sector, is the relief on the operating performance front, given falling raw material costs. Raw material as a percentage to sales fell 154-312 basis points (bps) year-on-year (YoY) to 62-63 per cent for the two players, helping offset pressure on margins.

While there was pressure on margins, the performance of both firms at the operating level was better than estimates.


The other positive for the sector is the shift from the unorganised to the organised sector, which will help the two companies gain market share in the higher margin replacement segment.


Given the market share loss for Exide and better revenue performance of Amara across segments, most brokerages prefer the latter. Amara Raja is trading at a 11 per cent discount to Exide on FY22 earnings estimates.