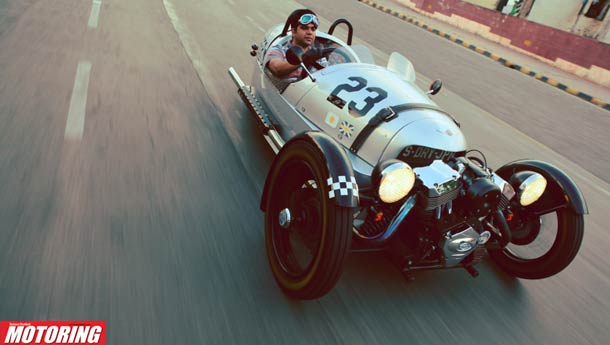 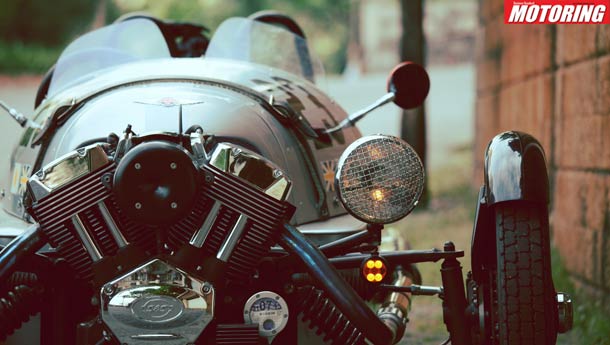 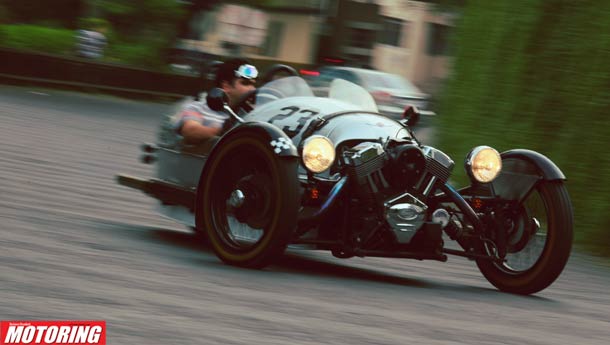 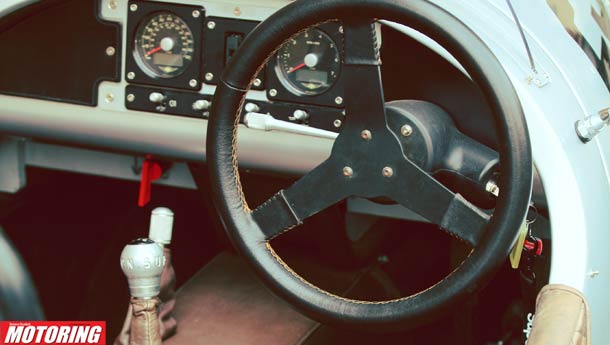 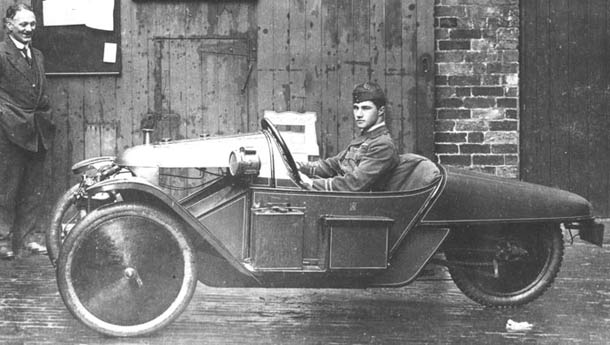 I am doing a heady 150 kmph while the seat of my pants is barely a few inches above the tarmac rushing below. The wind pummels my face, the tiny windscreen doing not much apart from directing the wind blast on to my hair and some of it into my grinning mouth. A loud soundtrack entertains my right ear drum with its snorty roar.

This is what sporty motoring probably felt like back in the 1930s, but upgraded with fuel injection, disc brakes and what-not for the present. Ladies and gentlemen, please put your hands together for the fabulous, quirky and the oh-so-desirable Superdry Morgan 3 Wheeler!

One of only 200 pieces to be sold the world over, this Morgan 3 Wheeler variant encapsulates all the virtues of the Superdry fashion brand — classic British engineering mixed with liberal servings of quintessential Americana and finally garnished with Japanese precision! Wait, I’ll spell it out for you.

The original Morgan 3 Wheeler dates back to 1910. It was brought back into the 21st century by Morgan and is hand-built at the firm’s ancient factory located in the UK — how much more classic British can it get? As for the Yankee element, that comes from the hefty 115 bhp, 14.3 kgm 1990cc V-twin perched upfront like some wicked hood ornament — this engine is built by the US-based S&S Motors. The Japanese touch comes through with the faux leather bonnet strap, the chromed mesh stone guards on the headlights and of course, the Mazda MX 5-sourced gearbox that sends power to the rear wheels... sorry, wheel!

Drop a gear or two in the gearbox — which is a joy to operate with its short throw and precise shifting — pick the tightest line around any corner the road can throw at you, enter the kink, all the while pushing down on to the gas pedal till you see the exit, and then stomp on the throttle as far as it can go. The result? Loads of tail-wagging sideways action, with the front wheels fully crossed up and a demented grin plastered across your face!

The steering wheel, which is detachable to aid the driver in getting in and out of the car, is perfectly weighted, with tremendous feedback. Folks who prefer over-servoed steering feel and soft touch controls, stay away from the Morgan, for this is truly what unadulterated motoring is supposed to feel like — exciting yet uncomplicated. Ethereal yet planted. Unconventional yet eternal.

Morgan Motor Cars, it appears, has hired a bevy of white coats just to adorn the 3 Wheeler with fine details that would take years of ownership to unravel completely. Smart toggle switches operate the lights and the horn, while old-school analogue gauges read the speed and engine revs to you. The tubular space frame is wrapped with aluminium and FRP. Honestly speaking, it's hard to believe that this car is almost like a cottage industry product because it is so well made.

As if defying physics, the Morgan handles like no 3-wheeler should. Don't let the skinny front tyres — replete with a classic chequered tread pattern — fool you, for they grip the tarmac like chewing gum. Squeezing the Superdry out of a corner with great enthusiasm will simply not bring about any noticeable body roll, let alone lift the outermost tyre off the ground. Autorickshaw manufacturers, please take note! This cyclecar, a term early motoring scribes used to describe similar contraptions, corners so well that you wouldn't be blamed for forgetting that it’s a 3-wheeler after all. However, that is quickly dispelled on Mumbai roads when you smugly aim the oncoming pothole between the two front wheels, only to have the solo rear hoop hit the crater smack in the middle.

The Morgan 3 Wheeler is what I would like to call a rider’s car. It is in essence a motorcycle with an additional wheel —lithe, crisp and raw in certain respects — but without the two-wheeler’s inability to stand itself up unassisted. You can actually feel the weather change and taste the salt in the air. There's no air-conditioning or music system to come between you and the road stretching before you. Er, apart from that truck, whose smoke-belching tail pipe dangles directly next to your face.

A classic case of being too good to be true, you cannot buy a regular Morgan 3 Wheeler in India through the company itself, though Superdry can wheel this limited edition down if you are interested in one. For those enthusiasts who would really love to go back in time whilst behind the wheel, without the inherent reliability issues that true vintages suffer from, this is a fantastic option. At least until Morgan itself steps into India!

The son of a reverend, Henry Fredrick Stanley Morgan was the founder of the motor company bearing his surname back in 1905. What initially started off as a car garage and dealership later went on to become a full-fledged automobile manufacturer with the production of the first Morgan 3 Wheeler in 1910. This single-seater car was offered on sale with the choice of either a single-cylinder 4 HP or a V-twin 8 HP motorcycle motor, both of which were manufactured by the then leading motorcycle engine builder J A Prestwich. The concept was simple — lash a powerful motorcycle engine on to a lightweight chassis — and the resulting power-to-weight ratio was, as predicted, incredible for its time and brought in many motorsport accolades for the company.

Car sales jumped when a two-seater version was launched. The firm consequently grew too large for the original factory premises, and a plot of open farmland was bought in 1914. This Malvern Link site continues to function as the ‘works’ till date.

The two-speed gearbox gave way to a 3-cog affair in 1931 and for the first time, also incorporated a reverse gear. By this time, Matchless engines were being used in the Morgan 3 Wheelers. In 1933, the first F-type was introduced, powered by a Ford engine. The F-types went on to be one of the most popular three-wheelers to go into production. At the 1936 London and Paris motor shows, a new Morgan was unveiled. A departure from the 3-wheelers, this one had one extra hoop and was called the Morgan 4-4 in keeping with its four cylinder engine and four wheels.


Currently Morgan Motor Cars produce four wheelers like the Aero Supersports, Aero Coupe, Plus 8, Roadster, 4 Seater, Plus 4 and the 4/4, all on order. In 2011 — almost six decades since three-wheelers ceased production — a new one was introduced, bringing attention to the type of cars that made this firm famous. By the way, Morgan is perhaps the only ‘pure’ British carmaker of some size left.