Recently auto industry was bestowed with the gift of excise cut extension for the next six months. The previous UPA government announced the duty cuts in the interim budget of February which was in force until June 30th, but looking at the poor state of the automobile industry, the newly formed BJP government decided to continue these concessions to ameliorate the deteriorating condition of the sector. Now the industry has every reason to rejoice but is it a temporary relief or an actual gain to the industry and consumer on a whole? 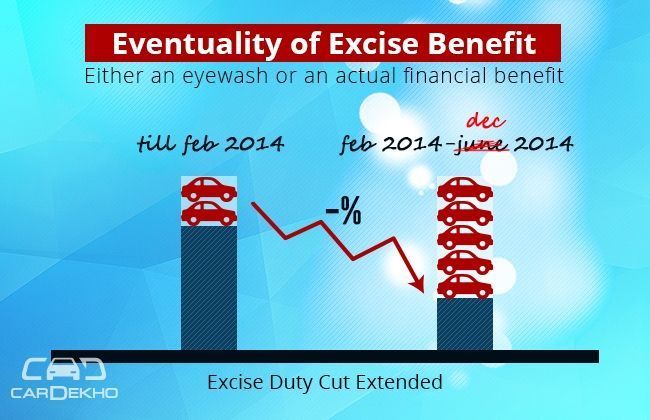 If we analyze the impact of last cut by the former government, the conditions in five months didn't witness any significant surge in sales. The excise duty was brought down to 8 percent from earlier 12 percent on small cars & two wheelers while the big vehicles got breather from 30 percent to 24 percent. Though the cut across the segments have resulted in reduce cost of ownership by a healthy margin, but that hasn’t been able to increase footfalls at car showrooms.

What more perplexed the auto sector was the lackluster response despite of the excise cut. The poor sentiments were to be blamed all over in terms of reduced growth and dearth in jobs. On the positive side, the manufacturers had got enough time to tackle this fiasco. Now they can prepare strategy to give consumers competitive pricing for their favorite vehicles. This would definitely lift up sales, at least for a few months of time until the actual growth rate is achieved. The May sales were average while the sales in June 2014 brought some smiles on the face of manufacturers.

For the entry level price-conscious models, the latest decision of the government would continue to be mainly determined by the cost of ownership which would remain due to high finance cost. Secondly, diesel price deregulation has resulted in putting off vehicle purchases, so it remains to be seen if the numbers start picking up. According the industry experts, there are more issues that need to be addressed in addition to the excise cuts. One of the first defenses in the field would be to improve lending rates which affect both the automakers and the consumers. However, manufacturers pile this cost into the final price of the car, so directly or indirectly the consumer at the end has to go through the hardships. Secondly, due to unstable crude oil prices, there could be a direct impact on both consumers and manufacturers alike. Thirdly, the poor rains would be stoking inflation eventually decreasing the demand of two-wheelers and four wheelers.

Lastly, the excise cut could prove favorable as festive season is approaching and manufacturers would be alluring consumers with competitive price tag, so it would definitely act as a booster. However, it remains unclear how excise cut will affect the actual growth chart for the time being. Also, the Union Budget that is scheduled to be presented tomorrow is expected to bring some major policies for the industry. Let’s hope all these factors bring some cheers on faces.