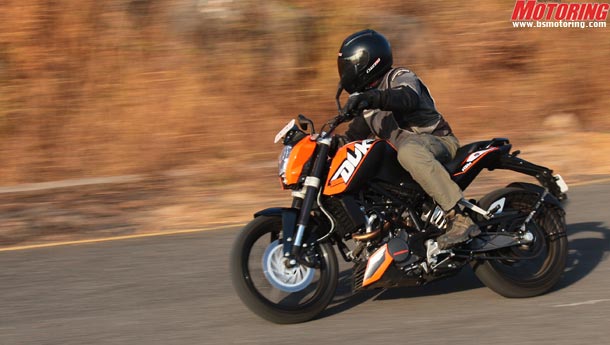 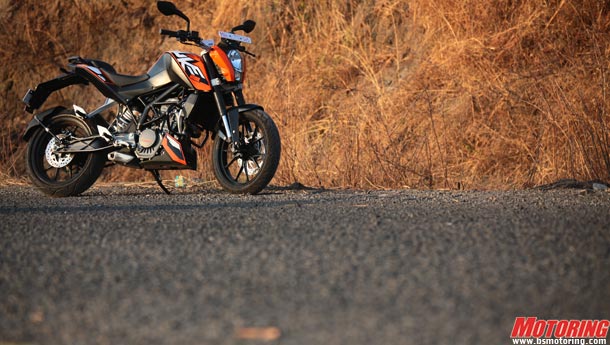 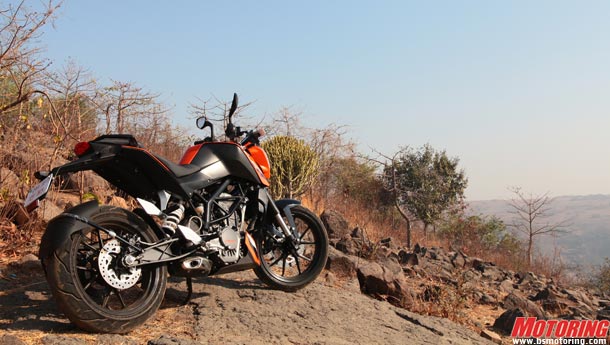 Its excellent on the track but is it any good on the streets? In a word – yes. But wait, because, like any finance scheme, there’s a quick, perplexingly fast-forwarded note at the end roughly sounding like – ‘Terms and conditions apply’. It really depends on what you’d prefer and what you’d like. If you like your motorcycles fast, loud and of a ‘take-no-prisoners’ disposition, look no further. At this price point, there’s nothing else in the market that offers such bang for the buck. On the other hand, if you want your motorcycles to be comforting, easy-going and hassle-free, you should just buy yourself a nice last-generation Karzima or a Unicorn and be done with it. So, if you belong to Group A here, pay attention. Besides the road test that is coming to you in the forthcoming April issue, here are some notes that couldn’t be squeezed into the print edition –

It attracts attention and how. People are curious as to what this wedgy outlandish orange motorcycle is. One guy thought it was an ‘ATM’ (how I wish!), another exclaimed ‘Duck!’ looking the ‘Duke’ graffiti written on the tank while another safari suit-clad gent thought it was amazing that the ‘Australians’ (probably never heard of ‘Austria’) were doing such cutting-edge stuff. The best one by far was the case of the curious textile shop owner and the conversation that ensued after he saw the bike went something like this –

‘Damn. The down payment is steep! But how much is the EMI?’

Says a lot, doesn't it? And since we're talking money, do note that it is quite steep to insure too. Bajaj's own packaged Bajaj-Allianz comprehensive insurance is around Rs 2600 bucks a year.


It’s light, lithe and very well built. It’s an interesting interplay between muscle and lightness in its design. Seating position is on the aggressive side but easy to get used to.

The ride is super stiff– a tad too stiff for our Martian landscape – and besides the fact that your bum is in for a bad time on any piece of tarmac that’s less than perfect, it makes the Duke rather fidgety  around bumpy corners, of which there are a lot of in India.

In dense traffic – like Bombay dense – it does tend to overheat and starts to slow cook your feet like they’re for dinner. Obviously, get moving and everything is back to normal.

Instrumentation is all-digital, comprehensive and easy to figure out, except for the bar tacho. It’s not bad but just doesn’t feel as nice as a proper analogue tach. Besides trip time, temperature, the current gear, time, tell-tale lights, three trips (including a separate reserve trip) and fuel, you also get a real-time mileage indicator and that would’ve been a good feature had it not been so restless.  It works as a general guide but it could’ve been better.

Bajaj is really committing to the KTM brand and from the looks of it, they’re serious on the complete KTM experience. The showrooms are professionally run, well-equipped, snazzy even and the workshops that are coming up look very promising and well thought-out. At the moment, the groundwork is still being laid throughout the country.

A 300mm radially-mounted disc upfront and grippy radial MRFs make stoppies effortless. And inevitable. And the same goes for wheelies too, of course, courtesy the mad motor.

Crash bobbins are a must, on the front axle and the rear swingarm. Those WP forks will be expensive to replace.

In a combined 60/40 highway-urban riding cycle, it returned 28 kpl, which isn’t bad considering I was riding with heavy throttle inputs. Take it easy and it’ll deliver 40-45 kpl. Quite good, no?

We did run one Duke 200 on normal pump gas just to see how it performed (87 octane. Ok, at least that’s what they claim) and it ran fairly well but its best with 91-octane gas.

It’s a bloody pain to clean – there are more nooks and crannies here than there are in a limestone cave. Best solution – make someone else do it. Or pressure wash it, if you don’t find anyone.

Given KTM’s legendary off-roading heritage, everyone automatically assumes that the Duke 200 – an all-out street series – might have some off-roading capabilities to it. In that sense, no, there isn’t much of the ‘990 Adventure’ off-roading DNA in here and it probably is as good as the next street bike when it comes to the dusty stuff – so, stick to the asphalt bits.

The headlamp power is on the weaker side and if you’re into touring, you might want to install some better lighting equipment. And get a comfier seat on there while you’re at it.

For those of you who are wondering what you should do with the bags of cash lying around you, there’s always the KTM PowerParts catalogue. The 2012 line-up has some especially tasty stuff specifically for the Duke

[UPDATE 29-MARCH-2012] The eyesore that is the rear hugger – similar to the one found on the Pulsar 135LS – can take a rest till the monsoons are here. And if you want it look even more purposeful, a tail tidy kit would do wonders. In the monsoons though, I would recommend that all of these ancillary items go back on to the bike. For such a high quality motorcycle as a whole, the Duke 200 has some pretty downmarket grips and levers. In a way, it’s good that they cost cut parts which are cheap and easy to replace and gave us great components where it really matters. With the stock muffler on it, we think it’s a fairly practical setup, at least for the enthusiast. When the revs are up, it lets loose a loud wail as it screams towards the 10.5k cut-out but it manages to be reasonably quiet up to 5000 RPM. If you want to do any sort of highway mileage on the Duke, an aftermarket pipe would be far too loud for comfort. Still, if you’re riding is primarily within urban environs or you’ve got some really good earplugs, there’s a LeoVinci system available from Bachoo Motors and as part of the official Powerparts line-up, we’re guessing KTM will offer an Akrapovic system for it as well, which will turn up the volume (some bass too please!) on the motor and of course, add a few horses. The shift light can be set for two functionalities – a first stage shift-up flasher that can be set at an optimal shift point and a second stage constant shift-up light that indicates the 10,500 RPM rev cut-out. The all-digital dash is comprehensive but the fuel gauge and the DTE (Distance to Empty) readings are pretty erratic so best use them only as a general guideline. Just off idle, the fuel injection system does tend to give a few hiccups occasionally, even cutting out completely sometimes. Not the most pleasant thing in the scorching mid-day sun in maddening traffic, let me tell you that. A few tuner shops are now offering ECU remaps for the KTM Duke 200. The remap sets the rev-limiter to a heady 11,700 RPM (instead of the stock 10,500 RPM limiter), which in turn increases the top speed of the Duke and also, claims to increase power by roughly 3 hp. Plus, they claim that the motor is more efficient on their map and is less stressed. All this for Rs 10,000. Not having properly tested any of these remapped motorcycles, we cannot comment on the performance of these remaps.   Keep coming back for more updates!