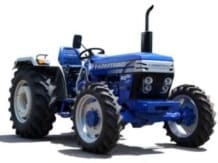 On a day when the broader markets closed marginally lower, the Escorts stock was up a sharp 4.2 per cent on the back of a steady performance and strong outlook for its key divisions. Net profit for the quarter, which came in at Rs 63 crore, was up 34 per cent over the year-ago quarter and was boosted by higher other income. The reported number beat consensus estimates of Rs 61 crore.


Aided by a seven per cent increase in tractor volumes in the June quarter and a price hike in March, overall revenues were up 11 per cent. There was, however, pressure on tractor sales in June due to uncertainty in the run-up to the implementation of the goods and services tax (GST). Tractor sales in June were down 18 per cent year-on-year (y-o-y) as there was destocking by dealers to minimise the impact on inventories.


The other segments of the company, construction equipment and railway equipment division, grew in the 10-20 per cent range. Though the performance of other segments helped in the top line growth, the company’s agri-machinery segment continues to be key in the overall scheme of things as it accounts for 80 per cent of the company’s revenues and almost all its operating profit. Margins in the quarter, however, were under pressure due to higher commodity costs and a weaker product mix.


The management believes some of the tractor demand will shift from June to the September quarter and has guided for the sector to grow by 18-20 per cent in Q2. In addition, good monsoons and the festival season will act as triggers. For FY18, management expects growth to be in the 10-15 per cent range. Escorts is expected to gain as growth in the northern and central regions is faster than the rest of the country and the company’s presence is the strongest here. 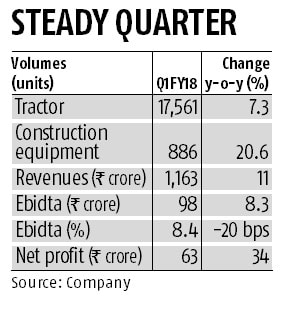 The company expects the construction equipment industry, which contributes about 14 per cent to the top line, to post strong growth of 12-15 per cent in FY18. While the segment posted losses at the operating level, the management believes things will turn around on the back of good growth leading to profits for the full year. While the railway division is profitable at the segment level and the management expects 15-20 per cent growth over the next couple of years, its contribution to the top line is just six per cent.  Given the strong outlook for the tractor space, most analysts are positive on the stock and expect profits to be driven by robust volume growth.