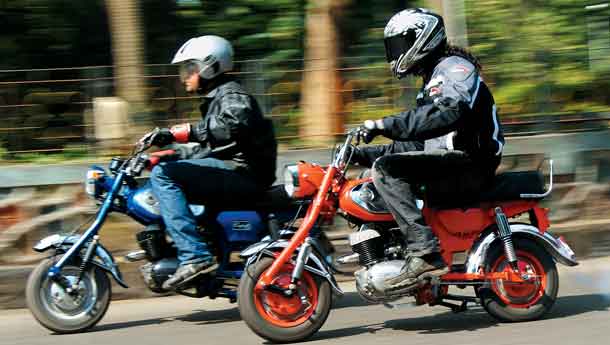 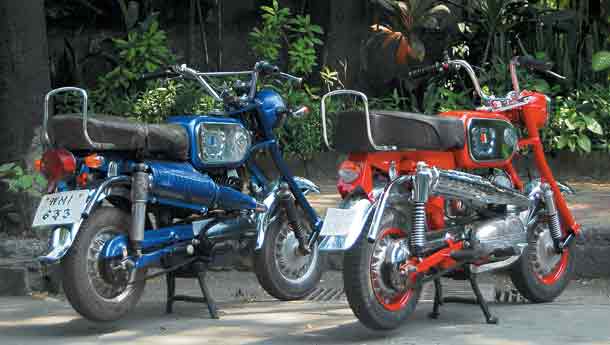 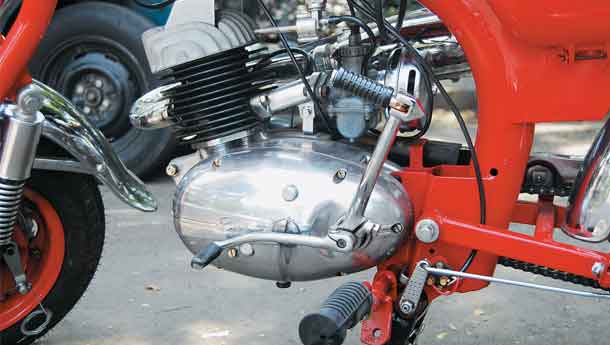 Tiny’ is a very relative term. I mean, though most people I come across comment about my ‘above average’ build, I would be a wimp when standing alongside those wrestling dudes, you know, the guys who jump around in a ring, wearing their undies.Similarly, in the motorcycling world, there are the behemoths. The Valkryie or the Bohmerland (a classic motorcycle of East European origin with the wheelbase of a barge) might even give a blue whale a complex. But where there are giants, there must be dwarfs. And the bikes Kartik and myself rode are definitely midgets.

Nobody really knows what was going through the minds of the blokes at Escorts at the time of designing this bike. Why on earth would someone design a road going motorcycle with dimensions that would make even Tom Thumb point at it, hold his stomach and roll on the floor, laughing? But they did, and with all due thanks to them, we have a little pocket rocket (literally), fondly called the Bobby.The Bobby, as it later came to be known, was introduced by Escorts as the Rajdoot GTS – an over optimistic acronym for ‘Grand Touring Sports’. The Bobby moniker was later added after the little bundle of joy did a little acting stint in the Raj Kapoor movie of the same name. In case your memory is foggy and you want it refreshed, try remembering nice legs, a short skirt and then Dimple Kapadia – in that order!

Before I continue, I am sure that the most ardent of BSM readers are already sharpening their sickles and greasing their guns for a siege on our office. Why? Because good old Shreenand Sadhale had already done a feature on the Rajdoot way back in August 2006. Before you all declare a call to arms, I must hurriedly mention that in this story, we rode this bike – not just one but two of them.   Bobbys (or should it be ‘Bobbies’?) aren’t seen very often these days. And that’s no surprise as they didn’t really sell like hot cakes back in their day. So, before we actually took them out for a spin, Kartik, Aman and myself decided to park them in the middle of a very busy pavement to look at people’s reactions. Some people, wound up with the hectic pace of city life, walked past without even noticing the bikes. Most, however, stopped, stared with amazement at the size of the machines and then began to glance around expectantly. I guess they expected a bunch of pygmies to pop out from somewhere, jump onto the Bobbys and ride off.

In shock, they watched as two six-footers swung their legs over the little bikes and sauntered off in a cloud of blue smoke! Blue smoke and two-strokes are like waffles and maple syrup – they are intrinsic to each other. The GTS is powered by the same two-stroke that did sterling service on the bigger Rajdoots, hauling around milk and man alike. It’s obvious then that the engine is no puny pip-squeak.The 173cc block, coupled with the fact that the Bobby weighs a tad more than a Somalian house fly, meant that the going was quite brisk. Kartik and I were having a field day scurrying around, scaring drivers half to death when we would pull up from nowhere and overtake them. The thing is that they could hear us coming but couldn’t see us in the mirrors!
Although the venerable RD350 came out of the same factory, there is no six-speed gearbox for the Bobby. Instead, the Rajdoot gets a 3-speed gearbox that is pretty adept for city traffic speeds but I wouldn’t really want to be on the Bobby while riding on the highways. The gear shifts are quite clashy and I thought I had broken something when I changed gears for the first time. I then remembered that my Jawa too feels the same way and I dismissed this as a Bobby quirk.

In a fit of creative genius, the Escorts guys saw it befitting to adorn the GTS with a scrambler type high pipe. No pillion really wants their thighs seared by a hot silencer, much less Dimple Kapadia, and to prevent such sizzling occurrences from happening, the exhaust is shrouded with a heat shield. It looks pretty nifty, actually.The frame is a simple affair, with a huge curved pipe holding all the other underpinnings. The engine, acting as a stressed member, hangs from the top pipe of the frame on two brackets, bolted onto the head. The crankcase of the engine still has the holes for the lugs to bolt on to the down tube of the bigger Rajdoot frame and, on the Bobby, are left bare.

Riding the Bobby was an experience in itself. I have never ridden a motorcycle where my knees brushed my two-day stubble all the time. The foot pegs were high, the seat was low and the handle nearly scraped the ozone layer. The riding posture was hard to maintain and felt like I was trying to grapple with the legs of a bar stool, all this while riding down the road at 50 kph.Ride quality isn’t really the Bobby’s field of interest. This is no surprise, as this thing has wheels smaller than a Matchbox car’s and the suspension is harder than bedrock. The rear shock absorbers are fitted onto a box-section swingarm with no telescopic fork up front. Instead, the GTS is fitted with a very peculiar looking Earl’s fork setup, reminiscent of old BMWs. A shock absorber, similar to the rear one, is fitted onto a linkage. The linkage pivots between the end of a rigid pipe, extending from the headstock and the shock absorber, providing suspension, or rather, the lack of it. Try cornering the little tyke around a bumpy curve and be prepared to reach the apex with the bike following after you. Get the drift? No? Well, don’t throw a Bobby around curves.    For that matter, don’t throw the Bobby anywhere because these things are getting extremely hard to find. Current prices of Bobbys are escalating faster than Mumbai’s land prices. Out of curiosity, I searched for Bobbys on Ebay and the search turned up just one bike for sale. The asking price? About 35,000 rupees. Hmm, come to think of it, I could buy a couple of square feet of prime property with that amount. So what if my feet alone can barely fit into it. Size is relative, remember?

A big thank you to Roopesh Thakkar, owner of Matchless Motors in Mumbai, for allowing us to punter around on his two Rajdoots.

Despite being so small and tiny and all of that, the GTS is anything but easy to miss. Every single person on the road saw the Bobbys scampering around. And every single person smiled – though it might’ve been due to the two blokes perched funnily on the bikes. It looks cute alright and it brings a smile to your face, even before you ride it. Never mind the fact that this tiny thing contributes more to global warming than bikes twice its size.

Pint-sized it might be, but make no mistake, this little baby is a hoot to ride. In spite of the small footwear and short gearing, the GTS felt more long-legged than I’d expected, at least in the city. Never mind the highways. It gets up to fairly scary speeds pretty quickly, singing the typical two-stroke tune. Rather loudly. You turn and the thing wants to do a complete 180. Small wheel effect. You think you’re braking gently and the rear locks up, and the bike does a little jig. Small wheels again! And it comes equipped with shock transmitters, not absorbers, which ensure that even going over a tiny pebble will throw you into weird angles on the seat. All of this accompanied by your own private smokescreen. As you can tell, the Bobby is a pretty dramatic experience.

The red bike wasn’t running at its best; its carb flooded and it wouldn’t start. Kyle liked that bike more, but I think it’s only because he likes whipping out his tool-kit at the drop of a helmet. I liked the blue bike which was a proper little scorcher to scoot around on and I wouldn’t really mind having that one in my garage. Or rather, in my pocket.