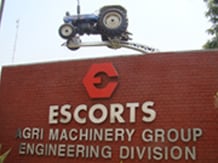 Although the Escorts stock has tripled since its lows in February, analysts believe there is more steam left given the recent restructuring exercise undertaken by the company as well as expected volume gains from good monsoons going ahead.

The company divested its auto parts business. Although it contributed less than two per cent in revenue, since it was making losses at the operating and net level, it could have a bearing on the company's consolidated earnings besides freeing up resources that could be used for more productive purposes.

The stock gained 18 per cent last Thursday after the announcement. The company will now be left with three core businesses of agri machinery, construction and railways, with agri segment (mainly tractors) contributing 81 per cent of the revenues.

The immediate trigger has been the divestment; though the company retained the replacement segment of the auto parts business while selling off the OEM (original equipment manufacturer) and exports segments. The auto part segment had revenues of Rs 92 crore and a loss of Rs 17 crore at the operating profit level.

While the company will make a provision of Rs 35-40 crore in the September quarter for unsold inventory, debtors, the capital employed in the business is Rs 55 crore (land, buildings) is being retained with Escorts. This will be used to expand the other businesses.

The key trigger is the revival in tractor volumes, which were languishing due to two consecutive years of deficient rains. Positive sentiment is helping the company improve its tractor sales, which has grown 17.6 per cent year-on-year in July against 12.5 per cent in the first four months of this financial year. The 31-50 HP (horse power) market continues to account for 80 per cent of overall domestic sales and the company has been looking at plugging the product gaps in the higher HP segments and gain market share.

Over the past two years, the company has launched/revamped 15 new launches and refreshes. With the launch of its new Powertrac Euro series in the 37-50 HP range and ‘classic’ and ‘executive’ range of its Farmtrac series, it has addressed gaps in its product portfolio, say analysts at PhillipCapital. Further, the expansion in the southern and western markets where its presence has been limited should also help. 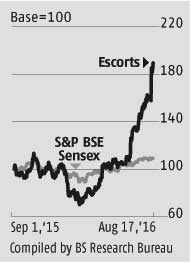 Given the positives from the auto parts divestment and volume-growth led gain in the agri segment, analysts at Motilal Oswal Securities believe revenues will grow 12 per cent annually over the FY16-18 period while margins should improve 450 basis points. The two should help grow net profit by 64 per cent over the same period. The re-rating given the restructuring exercise and volume growth translates to higher target price of Rs 360, which from the current levels means an upside of 18 per cent.