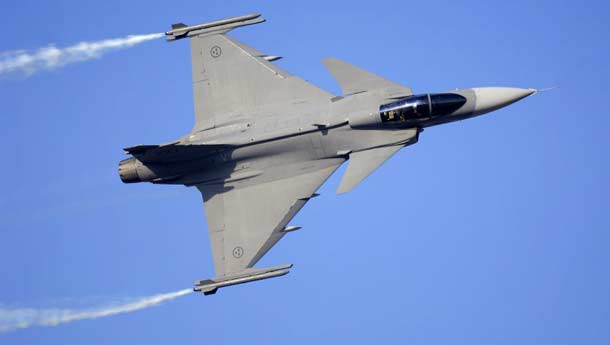 You have to admit, that if you appreciate all things stupidly fast and incredible, fighter aircraft sit at the top of the food chain like a manic bio-mech Godzilla-sized daddy of a T-Rex. Soon enough, you can pack your bags and get your fix, as the Aero India 2011 is just around the corner. Feb 9-13 is when it’s going to be held, at the Yelahanka Air Force base in Bangalore. And thanks to the massive, global power-shifting purchase order that India has coming around the corner, you can expect some stratospherically gnarly machinery to be out there. Not much is confirmed as of now but there’s a chance that you might get to see – hold on to something as you read this – the SAAB Gripen, the ever-so-popular F-16 Super Viper, the F/A-18 Super Hornet, the Dassault Rafale, the Eurofighter Typhoon, the incredible MiG-35 and if I’ve prayed enough, a F-22 Raptor. Yes, if it materializes, it will only be the third time the fifth-gen fighter has appeared at an international air show. And that’s just the start. India will showcase the home-grown LCA ‘Tejas’ as well as the newly-introduced Light Combat Helicopter (LCH). The C-130-J Super Hercules, the same one which India just inducted, along with Phalcon AWACS will also be present. It’s shaping up to be quite an event, one that I wouldn’t miss, especially since the icing on the cake is the Flying Bulls aerial aerobatics team, performing on all five days for your viewing pleasure. As the fat stumbling Po once said - enough talk, let’s flight!