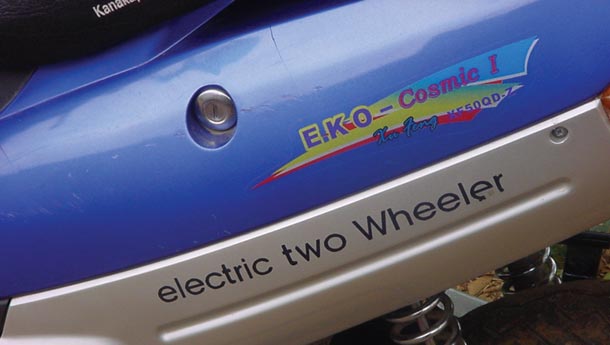 Sales of electric scooters in the country have been sluggish even as manufacturers are trying to improve their products and service network and match consumer expectations.

K K Bhan, managing director of Ultra Motor India, said the category was not growing as anticipated. ‘‘Last year, the industry sold 110,000 e-bikes; this year, it will be less than that. Volumes are small and margins are tight. India is a difficult market to crack,” he said. The nascent industry has been battling on several counts. Though the running cost is low (an eight-hour battery recharge consumes one unit of energy), the battery in an e-bike has to be replaced every 20,000 km, or roughly every year, which costs Rs 8,000-10,000.

“Consumers in India don’t think of the battery as a fuel tank, but as a spare part,” said Bhan. Similarly, even though a customer, on an average, may be driving 30-40 km a day, he is concerned about the limited range (60 km per charge) of these bikes.

The industry has been trying to address these issues. Electrotherm India, which sells YObikes brand of e-bikes, has come up with batteries that offer a higher range and can be recharged in four hours, in half the time it takes other bike batteries to recharge.

Similarly, Electrotherm has come up with a stronger chassis for its bikes as there’s a tendency in India to ride double-seat, though these bikes can carry at best one adult and one child. Similarly, battery maintenance is another big issue with these bikes.

The industry’s cause has not been helped by regional and fly-by-night operators, who have been importing containers of bikes from China, and dumping them in the Indian market. Some of these bikes had quality issues, which led to product failures and left consumers with a bad taste. At one stage, there were 300 players in the market. Today, only four-five serious players are left in the fray, many of whom have invested Rs 80-100 crore in their venture. These include Hero Motors, which launched three bikes at the Delhi Auto Expo, Electrotherm, BSA Motors, Ultra Motor (a British company), and Kolhapur-based Emmel Wheelers, part of the auto component FIE Group.

They are all vying for the 8-million-per-annum two-wheeler market in the country. As there’s increasing awareness on global warming, e-bike manufacturers hope consumers will shift to these battery-operated, non-polluting varieties. What could trigger such a shift are incentives from state governments, like Delhi and West Bengal offers.

The Delhi government has waived the value added tax and provides a 15-per cent subsidy on these bikes, which makes each bike cheaper by Rs 7,000-8,000.