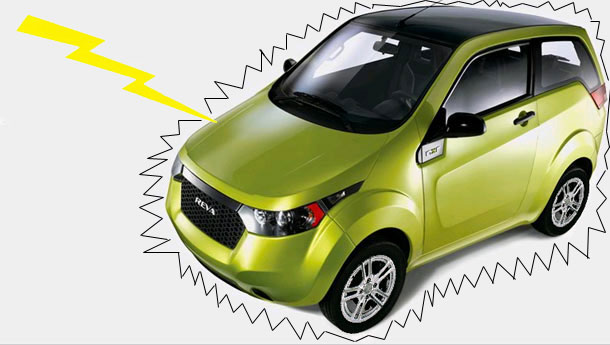 Mahindra has just announced the name of its first product to emerge from the Reva stable in now what has become a somewhat predictable fashion. You reveal the name to the world just weeks before the launch, ensure the nameplate ends with an "O" (oh!) and then try and figure out a vague description that explains the naming process.

Which is not the point of this blog. The big question is, has Mahindra Reva jumped in to the 'volume' electric car bandwagon at a time when the electric car story is starting to shatter? Let's take the example of the Nissan Leaf itself. Sales of the brilliant small electric car have been on the wane, especially in the US where it hasn't even done half the numbers the company had foreseen for 2012. Renault too has been struggling to move enough electric cars in Europe, despite great plans and infrastructure in place. What then has gone wrong?

You can't fault the governments too. Many countries in the EU provide tax benefits for electric cars, going as high as 5,000 euros in some markets. There are a decent number of charging points too, and while that number could get better, it would increase once sales start to cross certain thresholds. So you can't fault anyone but technology here.

Sure, battery technology has improved with the adoption of Li-ion technology. Even brushless DC motors are continuously being improved upon. Ranges have improved, doubling in certain cases while charging times have come down substantially. The big flaw though is that most electric cars still have a range that is no better than 150-160 km. And there lies the biggest challenge.

Ranges improve as battery capacity improves. The solution would be to place more battery packs, but that does take up more space, adds more weight and renders the vehicles less practical and effective. With the Reva e2o capable of 100 km at best (a real world figure of 75 to 85 km is more like it), you still need to wait up to six hours for a full charge or probably even as little as an hour or two for a quick charge, that charges them up by 75 per cent (this is an educated guess given that full specifications of the car have yet to be revealed). That still means a real-world range of 50 to 60 km, making these cars better urban solutions.

But there are several challenges. Even if Mahindra Reva plan to have many charging stations (they did mention a tie-up with State Bank Of India and Cafe Coffee Day for charging points at their banks/coffee shops respectively), most people would like to charge their cars at their places of residence or workplace and that's where things get tricky. Most residential complexes don't have basic 230 V sockets to power other devices in convenient places, let alone for cars. And a large number of office spaces too are out-of-sync with this reality. Clearly coffee shops and banks are more 'transition' solutions than actual ones. And getting back to the range question, many may find it a stumbling block. It makes such cars too singularly focussed, unlike modern internal combustion cars that offer the freedom of movement and an infrastructure setup that allows easy 'energy access'.

The fact is, the internal combustion motor has evolved so much over a century, that the entire industry and support structure revolves around it. Electric cars, whether from Mahindra Reva or someone else will find the going rather uphill, a charge driven not by pessimism but by reality.