Eicher Motors’ June-quarter performance was led by the two-wheeler segment, or the Royal Enfield business. A 25 per cent increase in volume and a three per cent rise in selling price helped its standalone operations achieve the highest-ever quarterly sales of Rs 2,000 crore. This was 28 per cent higher than the year-ago number, and slightly above the Street’s estimate.

Given a strong top line and a rich product mix, operating profit was up 32 per cent to Rs 631 crore. Margins at 31.4 per cent were about 100 basis points higher than the year-ago quarter. Net profit, at Rs 459 crore, was up 22 per cent, boosted by a 46 per cent increase in other income.

Unlike rivals, the company’s two-wheeler business was not much impacted by the transition from BS-III to BS-IV emission norms and the implementation of the goods and services tax (GST). Due to lack of BS-III stock of two-wheelers, it was not required to compensate dealers during the shift to the GST regime. 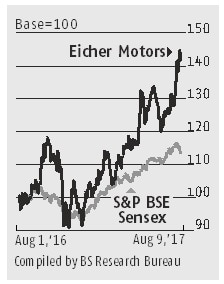 Eicher remains confident about its Royal Enfield business, with the waiting period for the Classic 350 being two months, when the same for the rest of the brands has come down. However, the waiting period for the Classic 350, too, is expected to taper gradually, as the company increases its capacity to 80,000 units a month from 60,000 over the next six to eight months. This coupled with increasing touchpoints, both in India and globally, is expected to keep the growth momentum going. Higher capacity and sales volumes are the triggers for the Royal Enfield margins. While competitors (TVS, Bajaj Auto) have entered into tie-ups with global majors, the company indicated that it has no need for a tie-up as of now.

An area of concern for Eicher is the commercial vehicle (CV) joint venture, Volvo Eicher Commercial Vehicles. Volumes for the CV business were down 27 per cent over the year-ago quarter, slightly higher than the sector, leading to a market share loss of about 70 basis points to 14.4 per cent. Barring the lower tonnage segment, it has lost share across all the medium and heavy commercial segments. The company highlighted issues related to BS-IV transition, given the lack of BS-IV parts from auto component suppliers. Given a large BS-III stock of CVs and the discounts prevailing, recovery is expected only in the second half of the financial year.

For the near-term, expect Eicher to be a single powered engine (Royal Enfield) with CV sales dependent on overall economic recovery and competitive pressures. The stock is trading at 36 times its FY18 estimates.