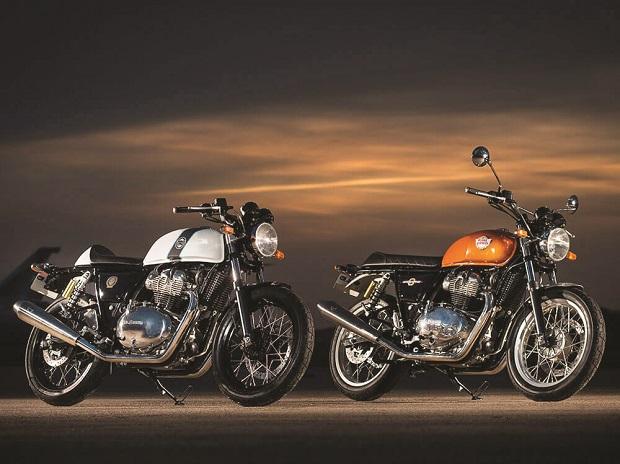 The street sentiment on Eicher Motors, which has been subdued due to falling volume growth over the last few quarters, could improve given recovery in key domestic markets, launch of new models, capacity expansion and improving share of higher-margin variants. Further, with the entry-level motorcycle segment facing severe competition, especially with players cutting prices to gain market share, Eicher Motors, the maker of Royal Enfield bikes, has become the top pick of analysts within the two-wheeler pack.

Amyn Pirani of Deutsche Bank says that Eicher is the only preferred stock within two-wheelers, as it faces minimal threats to growth or margins in the ultra-premium motorcycle segment.


This, coupled with strong volumes for commercial vehicles (CV) for the Volvo Eicher Commercial Vehicle (VECV) joint venture, is expected to improve operating leverage and boost margins in both the businesses. While higher growth for the truck industry is a positive, the key trigger for the stock would be the growth trajectory for two-wheeler operations which accounts for a majority of the operating profits of the consolidated operations.


After volume growth slipped below the 20 per cent-mark in the December 2017 quarter, there has been a rebound in Eicher’s mature markets of Maharashtra, Karnataka and Tamil Nadu. Maharashtra, for example, which accounts for just under 10 per cent of Eicher’s motorcycle volumes, recorded a 6 per cent growth in the March quarter after four consecutive quarters of decline. Similarly, after a sharp fall in the December quarter due to regulatory issues, Tamil Nadu also saw an improvement, while the pace of decline for Karnataka has moderated.

The company reported 24 per cent growth in the March quarter and over 25 per cent average growth in the first two months of 2018-19. Further, volumes are becoming broad-based with five states recording quarterly sales of over 20,000 motorcycles each, versus just one state a year ago.

According to Pramod Kumar and Anubhav Bajpai of Goldman Sachs, even as the key mature states saw a turnaround, the rural states continue to clock robust growth upwards of 45 per cent year-on-year supported by premiumisation of rural consumption (upgrading to premium bikes) and expansion of dealer network. Under-penetrated rural markets, thus offer the largest opportunity for the company. While the rural states account for 70 per cent of the industry’s volume, the metric for Royal Enfield is 47 per cent. Uttar Pradesh recently crossed Kerala, the largest Royal Enfield market, and is expected to sustain the current run rate of 25,000 units a quarter.


While the recovery should help, analysts at JP Morgan believe the key to watch out for in FY19 is the launch and the market response to the two 650cc bikes, the Interceptor and Continental GT. The introduction of these bikes in India will (further) premiumise its portfolio and add legs to its growth beyond the Classic 350, they add.


What should enable higher volumes both, for variants which have waiting periods of 1 to 1.5 months as well as new launches, is the expansion of capacity. In phase 1, Eicher’s motorcycle capacity is being increased to 950,000 units in the current fiscal year, which will be further be expanded to 1.3 million units. Domestic sales in FY18 stood at about 820,000 units.


This trend will help Eicher improve its realisation, which increased in the March quarter led by price hikes as well as higher share of premium variants such as Gunmetal Grey Classic 350, Stealth Black Classic 500 and Thunderbird X. While the Class 350 accounts for over 90 per cent of the company’s sales volume, the higher priced Gunmetal Grey variant accounts for a third of Classic 350 sales.


On the stock valuations front, while Eicher’s price to earnings multiple has come down from 45 times one-year forward three years ago to around 31 times and trades at a premium to two-wheeler peers, analysts believe that its positioning within the fast-growing premium segment justifies the higher multiple it is asking for. Long-term investors can consider the stock with a three- to five-year investing horizon.