Even as the auto industry is headed for some readjustments in profitability as input costs are once again on the rise, Eicher Motors’ ability to sustain the 30% operating profit margin in the March quarter (Q4) is commendable. This indicates if rightly invested in a good product line and quality is maintained, demand follows and customers tend to remain loyal. That’s the key takeaway from Eicher’s Q4 results.

Riding on a neat 20% increase in volumes for its Royal Enfield motorcycles and 12.6% growth for its commercial vehicles, net revenue at Rs 1,888 crore in Q4 grew by 23% year-on-year (y-o-y). Since revenue growth was strong, it supported the 15% and 17% increase in raw material costs and other expenses, respectively. Therefore, not just did the operating profit expand by 31% y-o-y to Rs 585 crore in Q4, even operating margins at 31% was better than 29.2% a year ago. Q4 was the fourth consecutive quarter of 30%-plus margins.


However, analysts point out that even if Eicher, given its leadership in the premium motorcycle space, could successfully pass on any price hikes if necessary, it could be ambitious to expect any more improvement to profitability. The observation stems from the fact that the margin is down a bit from 31.4% in the December quarter. Sneha Prashant of HDFC Securities says the increasing pressures on raw material prices and selling and advertisement expenses could limit the space for further increase in margins.


That said, analysts say even a 50-100-basis point decline from the current levels may not be bad, as much of margin expansions so far have been due to lower commodity prices. They say that even after a slight moderation, Eicher’s profitability may remain one of the best in the industry.


The level of profitability is despite higher volumes of its entry-level product Classic 350. Going ahead, it would be interesting to see how competition between Bajaj Auto’s newly launched Dominar and Eicher’s Classic 350 shapes up. As efforts to hedge competition, analysts say ramping up of its Tamil Nadu plant by August 2017 (ahead of schedule) should augment the current waiting period of Classic 350 by at least two months, thus revving up the volume game against Dominar. 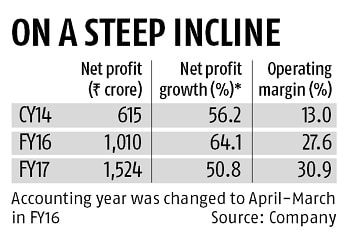 It is noteworthy that as much as Royal Enfield contributed to the stellar Q4 show, the role of VE Commercial Vehicles (VECV) was no less. Charting the industry trend, in a move to offload the inventory of BS-III vehicles, VECV’s sales volumes looked robust in Q4. Buses and light and medium duty trucks contributing adequately to the volumes and also helped Eicher maintain the 30% operating profit margin. Interestingly, the management, in a call with investors, stated that unsold stock of BS-III vehicles were much lower compared to peers and this should be comfortably sold in its export market. Therefore, the need to write-off inventory doesn’t arise.

With these positives in place, analysts remain optimistic on Eicher. Prashant reiterates her ‘buy’ recommendation with a target price of Rs 30,113 (16.5% upside).