Pranoy Kurian, analyst at IDBI Capital, explains that earnings of the VE Commercial Vehicles (Eicher’s joint venture with Volvo) lagged the expectations. Volumes for this segment grew 15 per cent to 13,408 units in the second quarter (Q2), which analysts say is a bit disappointing. “There could have been an impact of high base effect as the September quarter last year was one of the best for the commercial vehicles business. There was pre-buying activity for most of last year due to change in emission norms”, says Kurian.


Analysts largely agree with Kurian and feel that given the base effect impact, the Street was a bit too harsh in punishing Eicher’s stock on Friday (down 2.2 per cent) for the little miss in earnings. According to them, Eicher is largely valued for its standalone business, represented by Royal Enfield, and joint ventures such as VE Commercial Vehicles account for just about 10 per cent of total valuations. 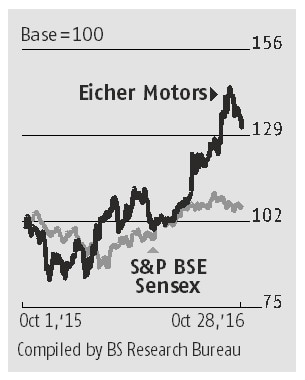 Royal Enfield is a market leader in the premium motorcycle segment and clocked total sales volumes of 166,941 units, representing 31 per cent y-o-y growth. The strong volume growth has percolated into robust Q2 earnings for Eicher. Net income on a standalone basis at Rs 1,989 crore was up 36 per cent y-o-y, in-line with Street expectation. Operating margins, too, posted a healthy 420-basis point y-o-y expansion to 31.2 per cent. Analysts say Royal Enfield’s ability to constantly expand margins represents that there is enough demand for the bikes across the entry level to top-end versions. Net profit grew 54 per cent to Rs 397 crore in Q2. In fact, with the strong show posted in Q2, analysts feel there is leg-room for re-rating in Eicher’s stock, given recent correction in its prices after registering its 52-week high price at Rs 26,601. “The market reacted sharply to Q2 results, but the company’s fundamentals remain unchanged and are getting stronger with every quarter,” says Kurian. He suggests that any decline in Eicher’s stock price provides a good buying opportunity for investors with long-term horizon. Eicher trades at 38x FY17 earnings.