The stock of automobile component supplier Motherson Sumi lost 10 per cent in the past two trading sessions on the back of weak June quarter results and earnings downgrades. Though consolidated revenue and operating profit rose 16 per cent and 22 per cent, respectively over a year, they were lower than the estimates. Reported net profit at Rs 302 crore on revenue of Rs 10,352 crore came in 13 per cent higher over the year-ago period.

The disappointment was largely due to lower than expected margins for both of its international subsidiaries, SMR and SMP, and muted revenue growth number at the former. Part of the reason was due to the change in accounting but even adjusted for this, SMR’s financials fell short of estimates.  Analysts had expected a major improvement in the margin profile of foreign subsidiaries. SMR’s Euro revenue growth was in single digits at 7 per cent. And, its margins, grew 50 basis points (bps) over a year to 9.1, were still below the estimates. While SMP posted a better revenue growth of 13 per cent in the Euro terms, margins coming in at 6.9 per cent (up 80 basis points year-on-year) in Q1 of FY17. CLSA analysts say margins have been around six per cent for the past 12 quarters. How revenue and margins at SMR and SMP unfold given expectations of strong growth on ramping up of new plants and higher content will decide stock fortunes. 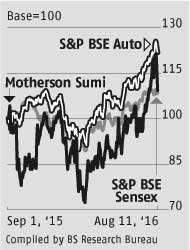 Meanwhile, Motherson continues with its strategy of de-risking its business model with no country, component or company to account for more than 15 per cent of its revenues. The Volkswagen emissions scandal led to the steep correction in the stock. Volkswagen is the largest customer for Motherson Sumi.

The positive is the India business, which witnessed a revenue growth of 18 per cent over a year. Given the 13 per cent revenue growth in the March quarter, the sequential improvement indicates a positive trend, on the back of increasing share of fast-growing car brands and higher content per car.

Analysts at Edelweiss Securities believe Motherson will be able to maintain its India momentum. Though Indian business contributes about 15 per cent of overall revenues, operating profit margins are double that of the European subsidiaries. Analysts, thus, ascribe a higher valuation multiple of 25 times (72 per cent of sum-of-the-part valuation), while SMR and SMP command 12 times. The management has stuck to its FY20 revenue forecast of $18 billion, while its current revenue is under $6 billion. Most analysts have cut their earnings estimates for the financial year and have target prices around the Rs 300.