Mahindra Electric has a simple plan to increase the sales of its electric cars: It is tying up with fleet operators like Ola as well as self-driven car rental company Zoomcar to demonstrate why they will make more money by using the e20 vehicle.

"For a fleet owner it is the cost of the car — the upfront cost of the car plus the running cost which makes his business model. And electric cars are more attractive," says Mahesh Babu, the company's chief executive officer (CEO). He points out that while his car might cost 10-20 per cent more than comparable gasoline-driven cars, its running cost of 80 paise per km is merely one-fifth to one-sixth of that of a petrol or diesel car.

As the country's only electric car manufacturer, his strategy makes sense. But for most other car makers it is time to take some tentative steps towards experimenting with electric cars. RC Bhargava, chairman of Maruti Suzuki, sums up the mood of the industry when he says: "The preparation for electric cars has not been much so far. But no one can avoid the change and one has to shift eventually."

The question is: When?

Unlike Suzuki, which does not have any electric car (it has a hybrid one, though) on the road globally, most foreign car makers in India are selling electric cars in various markets. The list includes Hyundai, Renault, Ford, Toyota, Volvo, Honda, just to name a few. But at a minimum price of more than $29,000, importing them at 60 per cent duty in India makes no sense. Of course there is clearly another route - completely knocked down cars could be brought at only 10 per cent duty.

Yet some of them are making small moves. Perhaps the most vocal has been Volvo, which has the ability to leverage its new owners, Chinese car maker Geely, in the electric vehicle space. Tom von Bonsdorff, managing director, Volvo Auto India, says that the company will introduce its first fully electric car in India in 2020, just a year after its global launch. It has also committed itself to bringing in at least three more cars by 2021. It has brought the XC90T8 — the first luxury plug in hybrid SUV — which comes with two charging points, one of which can be used at home and the other in office. Nissan wants to bring the Leaf, one of the best-selling electric cars globally, as part of a pilot in India

Nissan wants to bring the Nissan Leaf, one of the best-selling electric cars globally, as part of a pilot project in the country. Says a spokesperson for the company: "We will undertake a pilot for the feasibility testing of the Nissan Leaf this year. This is not a programme for mass market entry. We will look at how to adapt EVs to Indian needs." Renault also said it was evaluating an entry into electric cars in the country though there is no firm date. Hyundai and Nissan are planning a quieter start. The Korean company has been aggressive in the global market with its electric car under the brand name Ioniq. Y K Koo, managing director of the company in India, says: "A feasibility study is on for an EV (electric vehicle) and we will showcase a small SUV in this category in mid-2019."

Of course, with China being the largest electric car market, many experts say that their car companies can leverage their volumes to make a dent in the Indian market. After all, they have built electric cars at as low as $8,500, a price tag suited for the middle class. They also control over 83 per cent of the lithium ion battery-making capacity in the world and can manufacture or ship them cheap. Some Chinese companies have made a quiet entry — for instance, SAIC Motors, through its subsidiary MG Motors, is setting up a factory in Gujarat and is believed to be considering environment-friendly mobility solutions under its MG brand but has not given any detail. BYD Auto, which has a joint venture with an Indian partner, has forayed into manufacturing electric buses, to begin with. But with the growing tension between the two countries, whether India will be welcoming towards electric car manufacturers in China is a question. Of course, Indian manufacturers like Tata Motors are working on research and development for electric vehicles at their centre in Coventry, UK, where most of the work for such vehicles is concentrated. It has showcased the Bolt and the Tiago electric to the public and is working on batteries also. Says Tata Motors Chief Technology Officer Dr Tim Leverton: "Optimising the high costs of the electrical drive systems and providing a commensurate payback in terms of reduced running costs are the major challenge to achieving economic viability for the customer."

But he is hopeful that with the volumes of electric vehicles getting ramped up in China, costs will reduce and one would be able to find a sweet spot. Currently the cost gap is too high to subsidise, he says.

But it is undoubtedly Mahindra Electric that has taken the biggest bet on electric cars. It is ramping up its production from 1,000 a month to as many as 5,000 in its Bengaluru plant. Babu says work is on to use new technology so that it can offer high-performance vehicles by 2019, which will travel 250-300 km on one charge. The company is looking at introducing two to four new electric vehicles in the next two to three years. 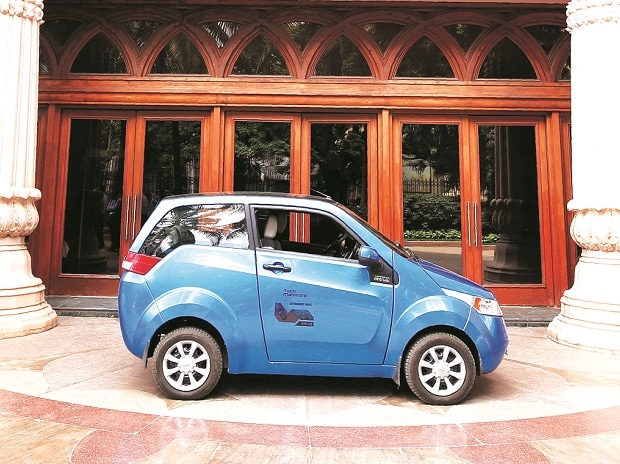 Mahindra Electric has a simple plan to increase sales of its electric cars: It is tying up with fleet operators like Ola as well as self-driven car rental firm Zoomcar

Yet people are sceptical about the ability of some of the car manufacturers operating in India to pull off the electric revolution. "R&D needs deep pockets and I don't think Mahindra or the Tatas have the cash. Volkswagen has said it would invest $10 billion in five years for developing an electric car. That's the kind of money you need. I don't think even Suzuki can do on its own," says a former managing director of a global car maker in India.

Also the government policy is being questioned. For one, the subsidy disbursement of Rs 55 crore to manufacturers of e-vehicles compared to what China pays is a pittance (it gave $4.7 billion till 2015). Two, the hike in the goods and services tax (GST) on hybrid vehicles by more than 12 per cent will force companies to stop investing in hybrid vehicles, which globally have been the intermediate stage in the move towards full electric vehicles.