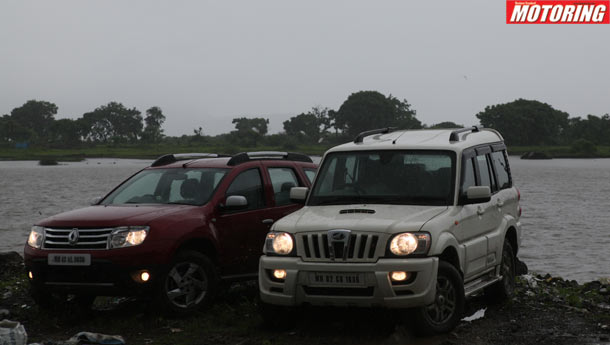 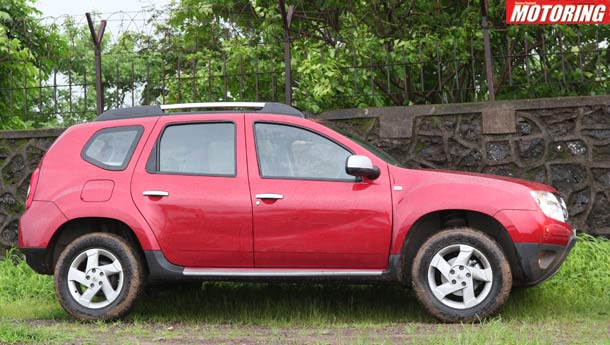 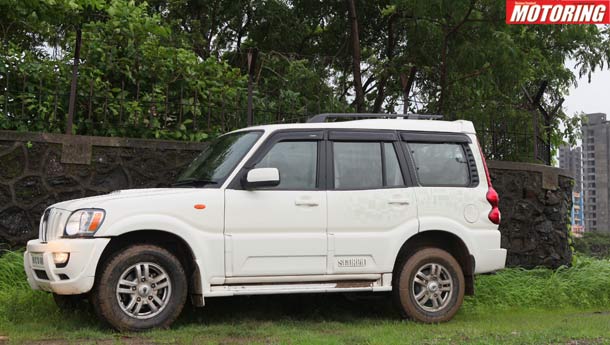 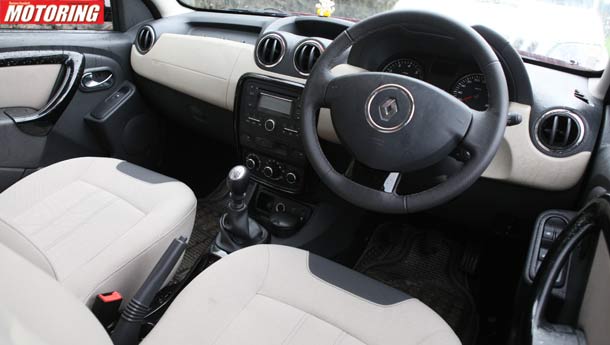 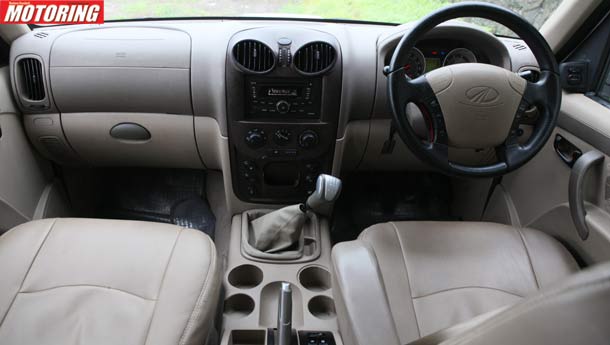 This year, we celebrate the 10th anniversary of the Mahindra Scorpio. It started life as Mahindra’s first truly modern product but more importantly, the Scorpio gave the manufacturer confidence to bring out more passenger-oriented vehicles. We can safely say that it is the Scorpio that sired the most-talked about SUV, the XUV5oo, till the Renault Duster came along. The Scorpio then, has made its place in Indian automotive history, but will it be just that, now that the Duster is here? Will the SUV from Mahindra’s ex-partner spoil the Scorpio’s tenth anniversary celebrations? Read on?

There’s no doubt about – the Duster is a good-looking SUV. The flared wheel arches make all the difference. The sides may look a little bare and for the Indian variant, the use of a chrome grille may make it a little loud front-on (frankly, we like the European Dacia Duster in terms of appearance) but there’s no taking away from the fact that it looks modern and contemporary. It is not as imposing as the Scorpio and consequently, getting in and out is easier compared to the Mahindra, which you have to clamber on to. Since it is based on a monocoque, passenger car platform (the Logan), the Duster is more car-like than the Scorpio and this shows in the way it drives too. But more on that later. The Scorpio is, on the other hand, more muscular and in-your-face. There are no delicate touches in the way it looks. Its wide stance plus the ladder-frame chassis means it is bulky and this translates to a better presence on the road. The Scorpio does not have an integrated, pure design overall, unlike the XUV, for instance. It is a mish-mash of styles, but since it is something we’re used to and familiar with, it does not jar. In other words, it looks dated – even if the modern Duster is not parked alongside.

Verdict, round one: If you want to show who’s the boss of the road (excepting a state transport bus, of course), it has to be the Scorpio. But if you want a good-looking SUV, it is the Renault

Now, the quality of plastics, levers and knobs and the overall finish in both cars leave much to be desired. But manufacturers have to make some money, right? Especially when they have to price their products extremely competitively in a cutthroat market like ours. The passage of time especially is hard on the Scorpio – the learnings from the XUV and Mahindra’s now-acquired knowledge in making passenger car interiors friendly and usable will be seen only in the next-gen W105 Scorpio. So for the moment, this one will have to take on the newer SUV here. The Duster interiors are friendly enough and Renault India especially has made quite a few changes to the insides to make it suitable for our country. That said, there are some quirks still to contend with, as if it is a necessary thing in any car that wears a French badge (<<do read our initial driving impression of the Duster here>>). The Duster is definitely more ergonomically designed on the inside compared to the Scorpio – be it arriving at the perfect driving position, manoeuvring the AC vents or to store your knick-knacks, it is all easily achieved.

At the rear, the Scorpio can seat three abreast compared to the Duster, in which three is a squeeze. And the Duster’s rear seat couldn’t be pushed back, though Renault wanted to, so that they could liberate some more leg room. Consequently, the Scorpio wins in this aspect. Of course, it is easy for grandma to get into the Duster as compared to the Scorpio. Plus you can fit in two more passengers at the rear of the Scorpio, though the Renault dealer can fit in two jump seats at the rear as an option. It’s not something we recommend, however.

Verdict, round two: The taller Scorpio offers better visibility and it also offers more room inside. The Duster interior however is a bit more friendly, thoughtful and easier on the eye.

There’s no arguing with additional cubes and power of the mHawk, which gives the Scorpio grunt and long-leggedness when it comes to the highway. The engine is mighty and Mahindra have deliberately kept the output at this level so that the rest of the Scorpio doesn’t get overwhelmed by this motor. Yes, they have curbed the output, which is good enough in this application. On the other hand, the Duster may be less powerful than the Scorpio, but it is a great engine in its own right. Yes, after the Fiat 1.3 Multijet, Renault's 1.5 K9K is 'world famous in India' because it finds use in a lot of cars. What is special about the engine is that for its cubic capacity, you can have a range of outputs thanks to forced induction. Now that translates to decent performance without paying too much money to your favourite fuel pump. Getting 107+ bhp from a 1.5-litre motor and to make it useable in day to day life is a feat of engineering – because you would want to avoid a severe case of turbo lag as well as make the engine develop adequate output at low revs for low-speed driving. So this engine does suffer a bit from turbo lag – but not as much as the Fluence when it first introduced. It is within acceptable limits and about 1800-2000 rpm onwards you can keep it on the boil and enjoy what it has to offer. Well, the Scorpio is not going to enjoy this – despite its power advantage, the Scorpio is slower than the Duster. Compare the figures: 0 to 60 kph – 5.0 seconds for Duster and 6.4 seconds for Scorpio. 0 to 100 kph: 12.2 seconds for D and 17.3 for S.

So what does that mean? Well the weight advantage for the Duster makes all the difference. In the way it drives, its quickness and in fuel consumption, which is 15.5 kpl for D and 14.2 for S, overall.

Then there are the transmissions. The Duster's 6-speed manual sends power to the front wheels while the 5-speed manual in the Scorpio telegraphs it to the rear. The shift quality in the Duster is marginally better than the Scorpio's vibey, long-throw lever. And the ratios in the Renault are well-spaced for driving in the city as well as on the highway. Once you're cruising, the Scorpio's tranny settles down and does a good job of maintaining overall good speeds.

Verdict, round three: When you look at the powertrains solo, the Scorpio wins. But it is what the powertrains do that makes the difference. In this case, the Duster's motor delivers almost all that you ask from it. That can only be good, right?

Yes, it is front-wheel drive versus rear-wheel drive! Benefits of FWD offered by the Duster is that it is easy to graduate to from the hatchback you have been driving all this long. The Duster handles like a car and it has better precision than the Scorpio. The Scorpio's rear wheels push the car so that affects dynamics, especially when you are cornering at high speeds. In other words, don't. At moderate speeds, both cars will offer you competent handling. As the speeds go higher, the Scorpio doesn't feel as planted while the Duster's steering feedback changes from good to not-so-good. There is a chuckable nature to the Duster while cornering while with the Scorpio you feel like it will take on anything – it does. The Scorpio's handling has never been its strong point and that can be attributed to the track/wheelbase ratio, which you can't fiddle with beyond a point. Hence, the next generation Scorpio is the one to watch out for – who knows, it could be  primarily front-wheel driven like the XUV. Even the Duster looks like it can take abuse – if we go by the track record of the Logan, we won't be surprised. <<<Read about our drive from Mumbai to Gangtok in the Logan here>>> Plus it rides very well. It does a great job of smothering bad roads without making passengers uncomfortable. It is brilliant and when it comes to driving dynamics, this is the Duster's biggest asset. The Scorpio rides well too but regular undulations tend to upset its equilibrium and you feel that the rear axle has its own independent trajectory to the front. The Scorpio needs those beefy tyres to maintain its stance.

Verdict, round four: Now rear wheel drive adherents may love the Scorpio, but for me RWD makes more sense in sporty, well-built saloons and not in compact SUVs. The Duster's FWD is good for most purposes and it rides well too. So whether you're driving on the moonscape of Mumbai or the rough roads of Munnar, the Duster delivers.

The Scorpio is a bit more expensive than the Duster. Ignore the petrol Duster, which only queers the pitch here. And the 85 bhp diesel version too. The top-end Duster with the 107 bhp engine retails for Rs 11.77 in Mumbai. The entry-level Scorpio starts at Rs 7.96 Lakh. The Scorpio may be the bigger, muscular and macho product here. But the Duster, with its passenger car underpinnings is more practical across all driving conditions and it is better looking and quicker too. Then of course is Renault's invitation pricing that makes it good value. So, in this battle, it is the Duster that wins. Round two with the new Scorpio will not be so easy however. But that's some time away. Till then, the Duster can poop the Scorpio's party.