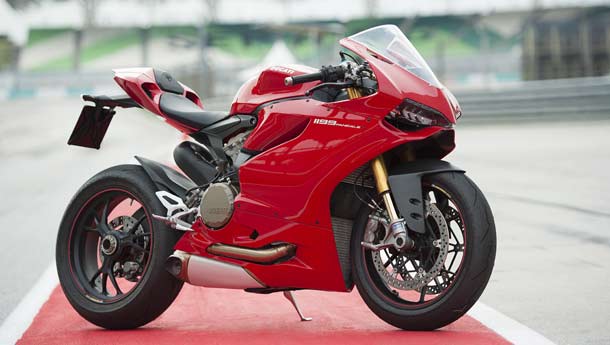 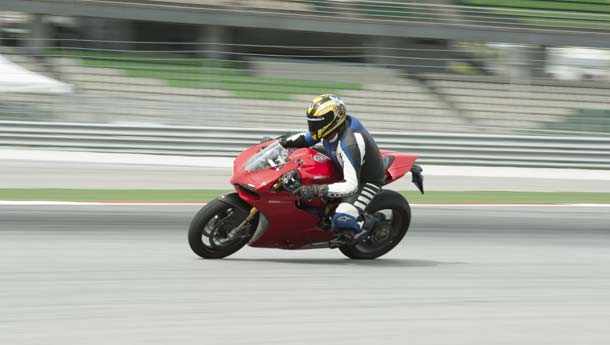 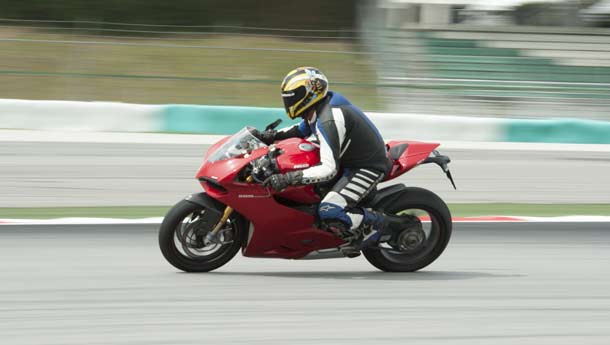 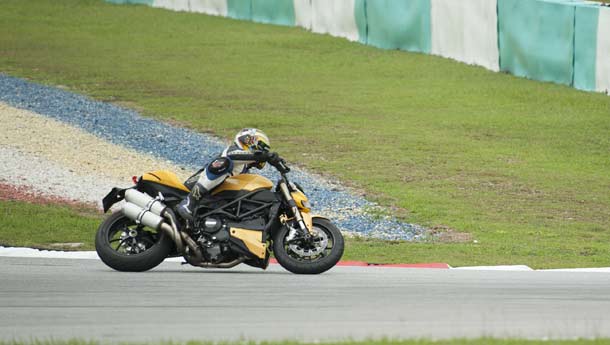 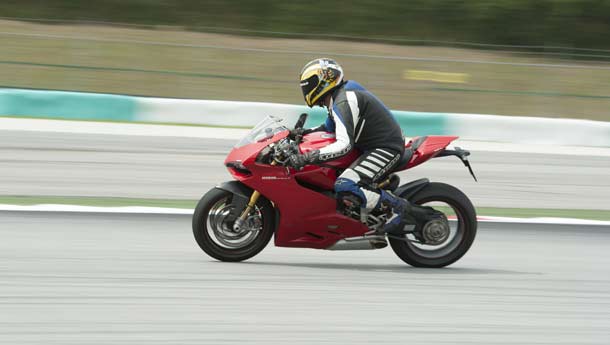 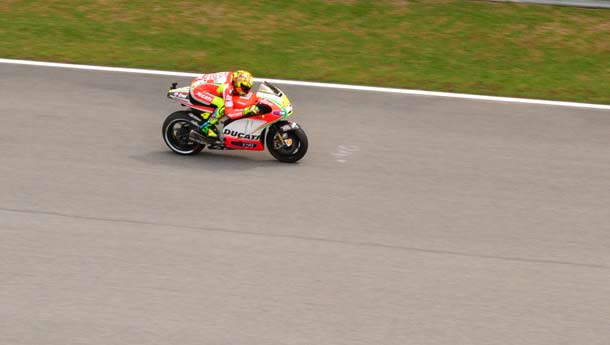 My mouth had run dry. I was sweating profusely, forgetting to breathe even. I wanted it to last longer just as much as I wanted to get done with it real quick. It was scary in bits, thoroughly enjoyable elsewhere, rewarding in more ways than one, and for a first-timer, I didn’t do a bad job at all, even if I say so myself. I’m sure my red-hot partner in crime was equally satisfied at the end of it. The Ducati 1199 Panigale S. Wait a second – what did you think I was talking about?

Let me rewind a bit before we get to the se...whoops!...riding bit, though. We (the dozen-odd motorcycle scribes from Indian magazines and the sole lass, a Brit journo) had signed up for the ‘Intermediate’ level (‘Advanced’ riders only rode Panigales, ‘Beginners’, only Monster 795s) for the Ducati Riding Experience, which meant we were entitled to four track sessions, twenty minutes each, on the 848 Streetfighter, including one session on the new 1199 Panigale S. Wait, there’s more. Having been split into small groups, we’d be led out on track by none other than Loris Capirossi and Troy Bayliss, neither of whom needs any introduction. I don’t know if I was more nervous the first time I invited a girlfriend home for a stay-over.

Sepang International Circuit is one of the fastest, yet most technical circuits on the MotoGP calendar today. On the telly, it appears fairly straightforward although from behind the visor, the change in incline across corners is truly intimidating. With bikes as powerful as these, straight-line speed is only a matter of how much wind-blast you can resist, though it’s easy to be lured into higher speeds than you can brake for within 200 metres, sometimes less.

My first session was on the 848 Streetfighter with Alessandro, one of Ducati’s ace testers, and – allow me to be honest – I was left with no energy, or inclination, to go back out on track again. Still, I returned amazed with how forgiving the track (and the bike) was. I mean, my last track outing (which was also my first-ever) was on a 9 bhp, 110cc, Honda CB Twister at Sriperumbudur! I suppose being host to F1 is the reason behind the generous track width and the ample run-offs although if you run too hot, with tough luck in your kitty, Sepang has the potential to kill. It did, last season.

I don’t mean to berate the 848 Streetfighter, but it is as easy to ride hard around a racetrack as a KTM Duke 200 is in the city. The stance is intimidating at first – I thought it was too high up, and I’m all of 6 feet tall! – but once you’ve flicked the smart kill-switch off and thumbed the starter, thoughts of such disposition are quick to evaporate. Here’s an 848cc, L-twin motor-ed bike that produces 130 bhp, easily nudges 250 kph, and offers no wind protection whatsoever!

By this session, however, I was already acquainted with the 848. Since there are no electronic riding modes on offer, the rider-motorcycle communication filters down solely to ‘feel’ – the way it should be, no? I had learned that Ducati had done a neat job offering a best-of-both-worlds gearbox, that the throttle was willingly volatile, that the brakes let out the right amount of feel, and that aggressive upshifts would be shot back with a violent wiggle of the tail-end of the bike. I tried it. On the straights, I managed to clock slightly over 230 kph in hot pursuit of Alessandro, the instructor for the session. Braked fearfully, but firmly, for C1 and thereafter it was an orgy of knee-downs. The 848 even power-wheelies in third gear if you’re properly on the gas although, let’s be frank, you sort of sense that the bike has room for another 30-odd bhp. That explains the bigger Streetfighters, then.

Right, so first they drain you out with two fast sessions, and then they expect you to keep up with Loris Capirossi! Fortunately, Loris picked the Diavel for this session, and so did the only other rider in the slot. Still on the 848 Streetfighter, I was now pretty confident of myself, the motorcycle and the track. And it showed. Four-second knee-downs on my virgin left knee-sliders, and more knee-downs on virtually every corner on the circuit – it’s got to mean something, right?

By the third lap, Loris and I were on flying laps, with me using him as a reference point to the best of my ability. Not easy, but it was as much of a fight to stay on the bike as it was quest to go faster. More knee-downs, a few small wheelies to spice things up, 230 kph on the back straight, 240 kph on the main straight... my adrenalin levels more than made up for my very evident lack of stamina, and I’m only too thankful for it!

This time, Loris was on a reverse-pattern gearshift 1199 Panigale S (he’s used to that sort of bike, after all...), and I was on a, well, 1199 Panigale S (I’m not all that used to this kind of bike...) as well. Five laps were all I was granted on the Panigale and I had to cram everything into them. This included re-learning the track and the racing line (to cope with the much higher speeds), adapting to an all-new bike, and then actually doing justice to each, or at least most, of the 195 horses the Panigale has to offer. Talk about having an easy life!

With the riding mode set to ‘Race’ (the best you can have), ABS set to ‘1’ (three modes in all – ‘1’ only counters front brake lock, ‘2’ counters that and rear-wheel lift, ‘3’ is the nanniest of them all), and the heart-rate set to about three-thousand bpm, we were rolling. Out of the pit-lane and onto C1, I squeezed the front brake lever, which responded with such alarming bite, I sort of lost whatever little scope I had of starting a family. Note to self: that was a teaser – these brakes can anchor you into the most undesirable stoppie of your life. At 200 kph. And 250 kph as well.

That said, C1 was still a knee-down affair and so were most of the corners on the first lap itself. The Panigale S has a super-friendly, confidence-boosting handling package and this is suitably contradicted by the absolutely brutal power delivery. By the second lap, I had power-wheelied the bike silly, and on both the straights, redline gearshifts kept the front wheel floating right up to the very last gear. The power is entirely tractable, the torque-band is creamy, and the gearshifts, slick even in the tensest moments. I really cannot fathom the sort of lunacy that drives people to go ride MotoGP bikes when Panigales and S1000RRs can still be bought!

When the Panigale comes to India (soon, I hear), no doubt a lucky few of you will go out and buy one to park next to the Lambo, but if you aren’t planning enough track-days with it, don’t buy one. Yes, it has the flash and the shock value and the presence, but so does running around in an astronaut’s suit, or walking with your arm wrapped around Chitrangada Singh. This bike begs to be ridden on a racetrack, hard, and the racetrack is the only place you will do justice to this incredibly beautiful motorcycle. That, or you could ring up that sweet motorcycle chap from BSM to do the honours...