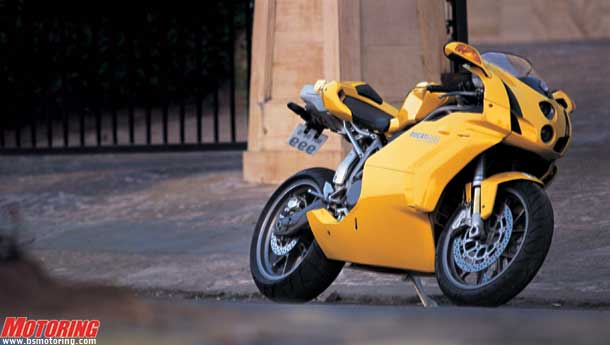 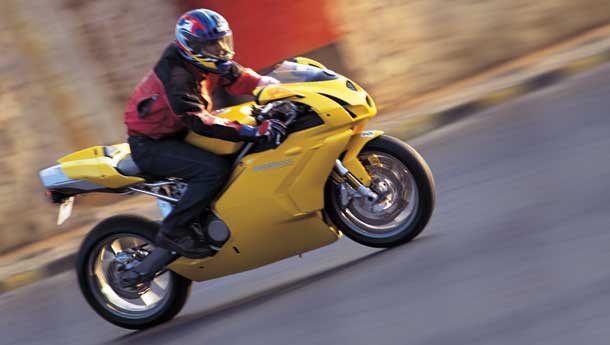 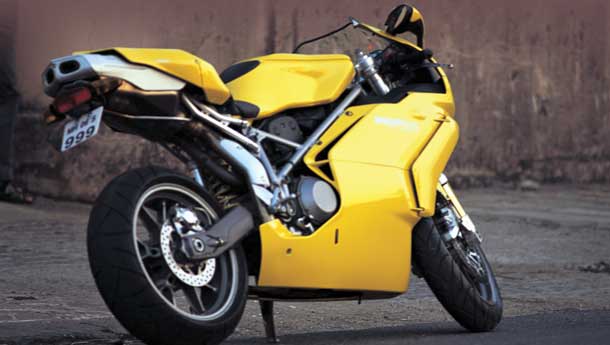 I’m still trying to get over the giddy lump in my throat after three days that have passed since we fixed up to feature the Ducati 999. For the past two hours, my sweaty palms have underscored my excitement in salty water... I am finally going to ride a Ducati!

Horrifying visions of embarassing slow speed dumps have left fetid scars on my imagination. I’ve dreamed of this ride for as long as I can remember, and it’s finally happening. We’ve touched Ducatis before, but the 916 (July 2001) evaded all attempts at saddle time and the Cagiva Gran Canyon (October 2002) did have an air-cooled Ducati motor, but it was, after all, a Cagiva.So that slinky yellow blur heading quickly towards me is as close I’ll ever get to manna from heaven.But before I have a chance, Bijoy’s already snagged the keys and I see the compact 999 pull out a massive gap over the car I’m following him in. Driving a sedate 77 horse cage, I cannot help but imagine the torquey 124 bhp Testastretta engine that throbs to Bijoy’s throttle hand.

If you’ve seen the Testa... word before, that is because the narrowhead engine first appeared on the 998, which became the awesome finale to the decade long reign of the 916 family. The same 998 CC engine, with changes to the piston stroke, airbox,lube system and an unprecedented unequal length exhaust system with the distinctive underseat box was to power the 999.

When Bijoy finally gets off the bike, I leap into my faded riding jacket and Shoei and onto the machine. And I am instantly at a loss to describe just how tiny the 999 actually is. Our Hero Honda Karizma is a larger machine physically. For instance, the tank slims down to just five inches at the crotch-end – distinctly odd when you first hug the tank but it brings a feeling of control that inline fours with their inherent girths will be hard pressed to match.

We’ve all heard countless stories of Ducatis and their genetic relationship to torture racks. So you notice when most 999 road tests in foreign glossies rate the 999’s ergos between ‘pretty civilised’ and ‘useable everyday.’ It was, hence, quite a surprise to find yourself almost bum over head as you tuck in for the first time. The reach to the bars is not excessive and the rearsets are not as high as say an R1.   But then, the 999 has the distinction of being the most adjustable bike in the business. The entire monocoque seat and tank can slide about 20 mm forward or backward to accommodate riders from 5’4” to 6’2”. The pegs, bars – and in the top versions even steering angle – can be changed at will. Sort of like a pair of Levi’s, the 999 seems designed to take the shape you are most comfortable in.Turn the key, placed next to the sleek silver steering damper and all the little lights on its circumference of the large white-faced tacho light up while the green-lit large LCD panel says succinctly ‘999.’ As if you didn’t know.

But the smile quickly turns into apprehensive awe when you notice that the engine braps to 5000 rpm with the barest of right wrist twitches. Smack into first and the Ducati is brisk from the word go. The pygmy 999 shrinks further in size until the tacho is practically under your chin and you have this weird flying sensation as the building waves of torque fling you and bike far down the road with minimum drama and maximum mechanical accompaniment. From 5000 rpm the pull will straighten your arms out. By 7000 you’re buzzing with the sensation of speed. Come 9000 the 999’s playing who’s-chicken with you. The flow of thrust is unrelenting and given very little time and enough space will show a neat 175 mph (280 kph) on the speedo. At which point, the speedo changes to ‘---’ and then ‘999.’ As one road-tester from Cycle World wrote, Ducati probably thinks you should be looking down the road at that speed, not at some speedo, no matter how stylish it is. What is amazing is that the front never goes light – it is designed not to wheelie and to maximize traction (and therefore acceleration). Did I mention this 999 won the World Superbike Championship out of the crate?

Ducati persist with their desmodromic valves (which replace valve springs with a second rocker that positively closes the valve) to allow superhigh revs (not that the bike needs them), and with their trademark trellis frame. The 999’s frame was designed to give a slightly longer wheelbase, maximize the (now double-sided) swingarm’s length and provide a quick-steering but supremely stable base to strafe down straights and slash through the curves. And boy does it corner. A thought will have the bike leaning hard and even us Ducati newbies were having a right hoot around the roundabouts on our route.The brakes are even more of a revelation. With a radial master cylinder  and Brembo four-pots hissing like a swarm of angry insects, a light brush on the lever will bring the 999 to astonishingly quick stops.This is an awesome motorcycle.   The riding experience makes you bow to Pierre Terblanche and his towering achievement.The South African designer succeeded  Massimo Tamburini – who penned both the 916 and post-Ducati, the MV Agusta F4 – at Ducati. Terblanche’s job was to design a bike that would surpass the 916-family of Ducatis. A dynasty that was as much of an aesthetic milestone as it was an all-out track demon and wheelie-king. The 916, in a word, was the zenith of Ducati’s history.

The design may be criticised for being too industrial. But the 999 has an inescapable, sharp focus – it is above all a machine?designed to win races. The wind-tunnel sculpted face, for instance, may not look too hip, but the moment the shutter finger presses down, it knows that it is impossible to capture the subtle, attractive curvature in pixels or on film. What is also impossible to capture, this time round because of space constraints, is the minutiae of exquisite detail that abound all over the motorcycle. From the thoughtfully placed matte plastic tank guard to prevent scratches, to the dimples on the two buttons that unlock a host of functions on the speedo – including a lap timer. These dimples repeat on the adjusters for the angular rear-view mirrors so you don’t put paw marks on the glass. The rear-view mirror mounts, on their own are worthy of a book on industrial design. And one is yet to mention the curving beauty of the double-sided swingarm, the angular shape of the tail piece, the five (Y-split) spoke wheels, filigree-light top triple clamp... One can just go on and on.

Where this Ducati is strongly at variance from the 916 is in the fact that the 999 is unashamedly a machine. The 916’s jewel-like quality and details are replaced by machined parts, created to a purpose but by a hand sensitive to aesthetic design. The result is perhaps one of the best looking machines yet.The other significant variation is that the 916 came, pirouetted but refused to let anyone ride. The full-bore aching throb in my forearms refuses to go and now, three hours after I climbed off the Ducati 999, I’m still immersed in it.

Our thanks to Zareer Porbunderwalla for allowing us saddle time on his prized possession. Regular readers will remember Zareer introduced us to his Hayabusa in 1999.