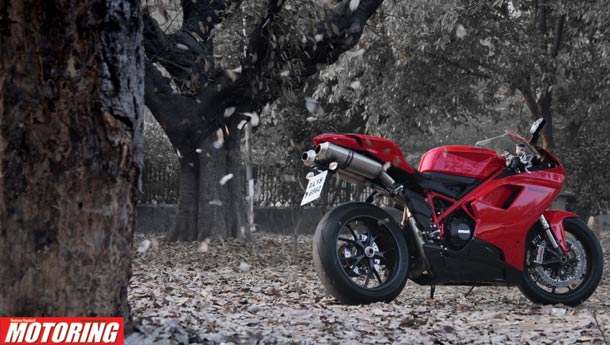 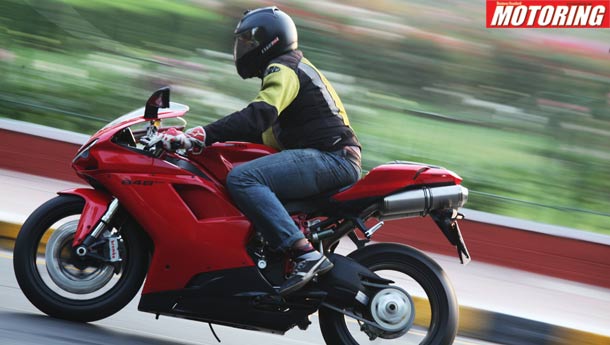 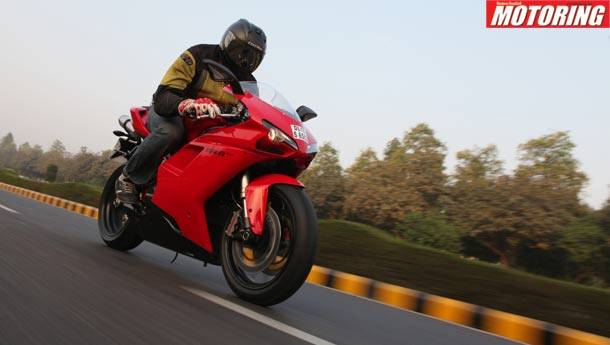 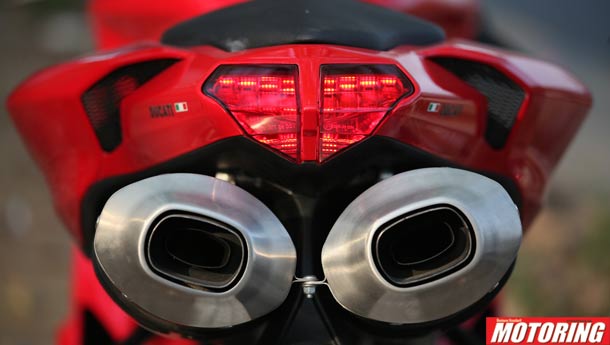 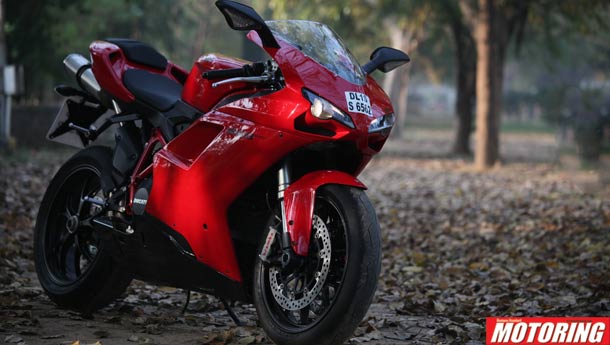 Cover those two tiny badges, one on the tank and the other on the engine case, and still, the 848 cannot be mistaken for anything but a Ducati! Ducatis have never suffered from an identity crisis, except for the Diavel perhaps, and the 848 is every bit the Ducatisti’s wet dream!

It’s six in the morning and Delhi is still asleep. The sun, unfortunately, isn’t and the air is warm despite the fact that the night has only just passed. At the touch of the starter button, the Testastretta Evoluzione 849cc L-twin motor grunts to life. There are 6 more horses over the older 848’s 134 ponies in this motor, and at idle, they seem quite well behaved and soft spoken.

The first gear slots in with a loud crack, akin to a .306 smooth-bore gun going off,and I wind in the throttle a bit, while releasing the clutch with my other hand.The black tarmac beneath begins to move backward, and the Ducati and me surge ahead, looking for trouble.

A little bit of throttle and the tracking car is overtaken in the blink of an eye. The throttle response of this motorcycle is virtually instantaneous; open up the grip a bit and the engine whips those 140 horses and near 10 kgm of torque immediately. Such is the engine’s willingness to please that the power delivery is almost predictably punctual. There is no wait and watch with the 848 EVO – there is power when you want it, wherever you want it. And then some.

The desolate, rod-straight Delhi roads invite impromptu drag races. So what if there’s nobody on the road to race with? I’m enjoying being pushed back into the firm seat, my arms clutching the bars for all they’re worth, every time my wrist whacks the throttle open. I’m easily doing well past the tonne, and opening up those Marelli throttle bodies as far as they can go results in the 848’s front end lightening up. I can see the instrument cluster beginning to move upward into the air and then, ‘Dear passenger, your flight 848 EVO has just taken off from Delhi’s latest runway at Janpath'!

The EVO Testastretta motor is in its element beyond 3000 rpm. This is the sort of rev happy engine that requires diligent gear shifting. Push in a cog too early and the motor will bog in, grumble with a clatter and then takes its own sweet time coming on the pipe. Instead, redline that thing everywhere and with every upshift, the motor is howling, almost begging you to keep giving it the stick. This motorcycle will push you to push yourself harder. You’re ultimately in charge here, but like Lucifer enticing your soul into the blazing pits of hell, you need to know when to back off, or the 848 will lead you to your doom.

Rolling off the throttle, the engine hurls only the choicest of expletives in the form of blats and rumbles, as if vehemently protesting the very idea of slowing down. It gets so addictive that I continuously find myself whacking open the throttle and then letting go, listening to all of that R-rated Italian splatter emerge from those two underseat exhausts, with a wide grin on my face.

On the track, I imagine that the tight crouch that compromises the 848’s riding position should be spot on and not much else would be desired. But now that the traffic is building up on the roads, the crouch is fast taking its toll on my wrists. With the average Delhi-ite up and about, some putting getting to work on time far ahead of common sense and traffic regulations, the riding pace has dropped drastically.

The temperature gauge is now hovering at 105-111 degrees, much hotter than the 95-100 degrees from just an hour ago. I can now feel my left inner thigh cooking gradually, the heat radiating from the engine exhaust piping that runs close to where I grip the tank with my knees. I make a quick break through a gap in traffic, and the burst in pace allows air to rush through the radiator, cooling things down appreciably quickly. It’s almost cruel, subjecting a thoroughbred motorcycle such as this to the great Indian traffic crawl, and with every passing moment that the 848 and I slug it out through the urban chaos, the engine temperature rises again.

Although the engine is best enjoyed on the track, or at night, when the roads are empty, the way the 848 handles at low speeds is remarkable. Most superbikes are lumpy at low speeds and then lighten up as the pace increases. With the 848, which happens to be the lightest sportsbike in the Ducati lineup, things are different. The 168 kg dry feel lithe and nimble at walking pace, as I try to squirm ahead of the cars and buses stopped at a red light, in order to be the first out of the lights.

Sifting through breaks in traffic is bordering on effortless and when tackling the only corners I could find in Delhi, around the infamous gol chakkars that dot the city, the Duck’s Pirellis stuck to their line like superglue, and the bike was a blast to change direction with. No surprise, then, that the rear hoop hangs off a single sided swingarm, no less.

Another facet of the 848 Evo that sets it apart from its ilk is the phenomenal ride quality. Most sportsbikes are crashy over the slightest of bumps, but the test 848 that I was riding, with its shock setup dialled in by the service centre, took on road irregularities with a finesse that would surprise many. Heck, in fact, the way it rode over the potholes (I actually had to ride 20 km to find them in Delhi!) was much plusher than the much lighter and less extreme KTM Duke 200!

What the 848 could do with, however, is a more chatty rear brake. The Brembo monobloc rear stopper feels numb and requires a rather heavy foot in order to get it to bite down enough to make a difference. But the front brakes, also Brembo monoblocs are feather-light to engage, more than make up for the lack of feel and return brilliant feedback, all the while delivering progressive and significant retardation in speed.

Overall, the 848’s build quality is typical Ducati fare, but if you look really minutely, there are areas that are a bit of a let-down. Take the mirrors, for example. Apart from appearing a tad dowdy to look at in terms of plastic quality, there are uneven gaps where they meet with the fairing.

But in the grand scheme of things, these little niggles can’t do much to take away from the fact that the 848 is a brilliant piece of race-bred engineering that has ingeniously been tweaked to take on diverse road conditions too. This is the motorcycle that you step up to from the Monster, to hone your skills on before you can save up for that Panigale. After all, once a Ducatista, almost certainly a Ducatista for life! Like I mentioned earlier, when it comes to a Ducati, there is never an identity crisis.