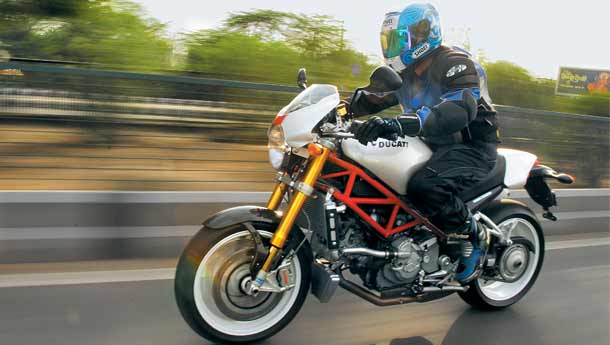 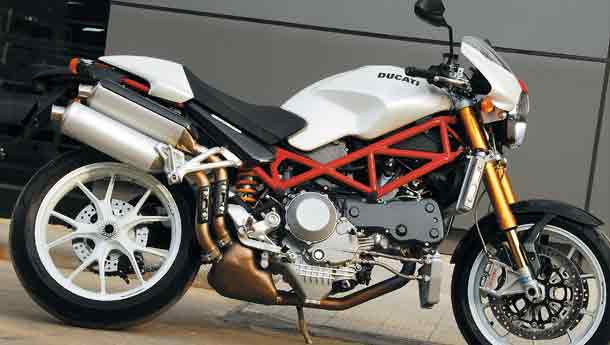 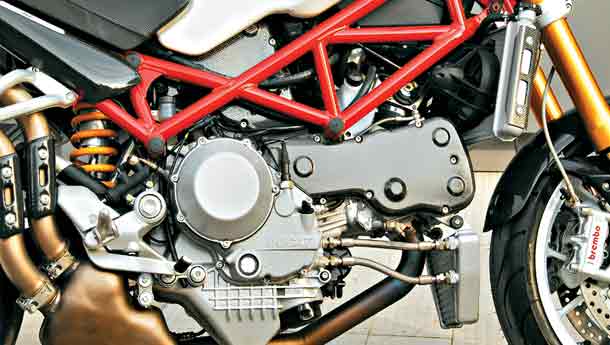 It’s not everyday that you feel your hair standing on end... a standing ovation of the internal kind, if you will.

But here I am, seated in a white-clad, uncomfortable chair in Delhi’s Oberoi Hotel, watching, literally, a red letter day in Indian motorcycle history unfolding before my disbelieving, one-step-from-teary eyes. On the stand is the smiling white-haired Gabriele Del Torchio, the Ducati CEO, who is announcing the fact that Ducati just became an Indian dream-come-true. If you’ve got the money, they’d be happy to lift you into the saddle of your dream. Any current Ducati could be yours for between Rs 15 lakh and Rs 50 lakh (you thought a 1098R with traction control and all the goodies would be cheap?).

It’s finally happening. The big ones are coming in. In the wait, I’ve grown older, my wisdom, hopefully, has grown as well, my waistline certainly has. But the bikes I’ve always dreamed of are finally coming to within touching distance. A few hundred promotions, a couple of hundred wage increases, and even I will be able to walk into a showroom and get me one. Superb!Everything from the Monster 696 to the 1098R is on offer. Call up Precision Motors (at +91-22-6740000) and say the magic words and your doorbell will ring and I’ll be outside trying to blag a ride. Er...I mean, they’ll send you your Ducati ASAP.The showrooms are coming shortly, October is slated for Ducati Mumbai to open, with Delhi to follow shortly, followed by more international style Ducati stores across the major cities. Just a word on the Monster, the 696cc is under the 800cc limit, and therefore, is in homologation and the only Ducati you cannot buy immediately.    At the press conference, the dark backdrops are adorned by super-exotica from the shoe-shaped land of motor passion. A 1098R and a gleaming black Hypermotard are on the high stage, while behind the tangle of TV cameras and unruly cameramen are an 848, a 1098 in eye-watering yellow and a Monster S4RS. The gorgeous trio makes me want to turn my chair around and look back at them instead. I don’t need my ears pointing forward to listen to the speeches, right?Then someone whispers in my ear, ‘Patience. You’ll be riding one shortly, so keep it pointing forward.’ At least that’s what I hear. A couple of hours later, I’ve had my fill of chatting with the Ducati gentlemen, and I’m itching to turn the key. And soon it does happen.

It’s a hot Delhi afternoon, when the 848 crackles to life under my gloved thumb. It’s loud by Indian bike standards and the sound (Del Torchio is careful to point out, Ducatis don’t make noise, they produce sound) is incredible – the live heartbeat of a vital, energetic, 134 bhp, 848cc L-twin warming up. The staccato beat ricochets off the walls of the hotel and makes the afternoon special. As I roll off into the afternoon and I get comfortable, everybody in the hotel lobby has stopped to take a look. Can’t resist blipping, then. Oh, the sound. Inside me, something says, ‘Yeah, yeah, wait till the factory-spec Termignonis are bolted on...’ But what’s this, the damn thing is juddering... of course, the famously lumpy Ducati low-end. As we pass 2,000 rpm, the 848 clears its throat and begins to sing. The beats join up into a thundering chorus that builds and builds. As does the power. In our traffic – I’m getting this ride as people are rushing to get home – opening the throttle has to be a judiciously calculated decision. Forget rolling the throttle open with any sort of seriousness. Only when you have 200-300 metres of open ground can you do anything at all. And when you do, it transports you instantly to a far, far happier place. Stretch the throttle cable, and the Ducati reciprocates. Arms go straight, eyes go wide and it’s off like a pebble from a catapult. You feel the bike rise on its front suspension a bit and if you find the space, eventually, the front-end will go completely light as well.

The 168 kg 848 is tiny. Fat rubber aside, we’re talking about a motorcycle that’s similar in size, and (dry) weight to um, a (all-fluids) Karizma. And the Ducati makes, oh, about 120 bhp more. While I wait for a less busy stretch of road to arrive, it feels like carrying a bazooka through an inhabited area. You’re itching to put your eye to the sight, feel the cool metal snuggle up to your finger, to feel the tube push you back as a contrail of smoke and the flash-bang of the explosion completes the thought.And when I do locate the space, I’m in second, and I pull the trigger. Whoa! The instant torque is a hard, instant punch in the stomach. There’s no moment while the bike gathers itself. One second you’re rolling at 30 kph. The next you’re rocketing forward, all muscles taut, every nerve tingling, vision narrowing and an enthusiastic twin urging you to keep at it.

Thankfully, the brakes are even more powerful than the engine. A finger on the radial-everything brakes quickly brings the beast back into rumbledom, and the pace becomes more sane, if not altogether happy for the 848. Radiator temp readout says 97 degrees, but it’s rising, before it settles at about 106 for most of the ride. But the searing heat aside, what a machine! True, the ride is on straight roads and on polished tyres, so the chance to really check out the legendary handling is evading me. But seriously, it’s a white-hot pleasure to be riding this in India, despite the traffic.Besides, it’s absolutely gorgeous in white. Italian design is hailed as a uniquely passionate thing, and believe me, tomorrow, when you’re driving past a Ducati showroom, the bikes in the window will stop you in your tracks. If I were rich enough, I’d probably be able to convince my wife to let me buy one for the express purpose of parking it in the living room. Well no, I’d probably ride it around lots, but the bike’s sexy enough to inspire such thoughts.

Later on, I swap bikes and move into the Monster S4Rs’ saddle. Here is another spectacular motorcycle. The last of the fully-1990-style Monsters, the S4Rs, the most powerful of the Monsters wears a genuine Testastretta 90° V-twin, in roughly the same spec as the 2006 999 or the 999S. Yup, a 130 bhp motor, that one is. Slung in a motorcycle that is gorgeous, long and a genuine icon that invented the naked class. But that isn’t the highlight of the ride. You see, the 848 is supposed to be the racebike with lights that no longer fits into the supersport class. Which means, it’s a committed, hardcore motorcycle for hard men, and comes with a stratospheric performance envelope. The Monster is much simpler in nature  – it’s a grenade. No, really. The throttle is so directly connected to freakish speed that it literally is like pulling the pin. I inadvertently opened it a fair bit only once, and I’ll never forget it. The S4RS responded instantly, sending the speedo and tacho into a wild orgy, lifting the front wheel off the ground for a bit and basically squatting a bit on the rock hard rear spring and shooting forward. So scary, that I almost instantly had to roll off and get back on the brakes. It must have looked funny. A gorgeous white-red Monster, one minute it’s rolling steadily, then it stretches the front forks and lunges forward and they equally suddenly the front forks are fully compressed and the bike’s slowing dramatically. Wow. That’s impressive. Can you visualise the time it takes between you switching a bulb on, and the light flooding into the room? The Monster’s throttle is even quicker.Get out of traffic, sneak the throttle open a little bit and you’re already far, far ahead of traffic, speeds are already up to 120 kph and life feels really good. The view is dramatic too. You see flipped up twin pod meters in classy white and red, and very little else. The tiny flyscreen and just a hint of the tank ensure that the sensation of flying low on the Ducati is inescapable.   As it turns out, the Hypermotard escapes me on the day. But I’m ecstatic. Not only have I ridden my second and third Ducatis – remember the yellow 999 in Mumbai – those of you who have the money to fund your dream can buy one today. Congratulations.Precision Motors, headed by Ashish Chordia, is the firm that handles Porsche in India. And they’re at the helm of Ducati’s Indian adventure as well. So the quiet confidence that service and aftersales support will not be an issue is deserved. Indian Ducatisti will find no difference in the quality of aftersales support here compared to anywhere.

Meanwhile, Del Torchio says that Ducati is looking at about 50 bikes for the first year of sales. And he explains, ‘At Ducati, passion is central to the company. So to me, it is important for me to have good family members, rather than a large family. It is the quality of the Ducatisti that is the central core of our value set, and not the quantity of them.’ It sounds like a lot of marketing spiel, but when you hear him talk, he sounds sincere and he believes firmly in it. And while Del Torchio spends the day explaining to journalists repeatedly that motorcycles can cost as much as houses and so forth, I’m in an excited, happy blur. Ducati just landed. Damn!To clear up the technical side of things. Ducati will use the 800cc and up space to get the bikes here. And while Ducati is working towards sourcing more components from India, there is no plan for any sort of manufacturing here. The official line is that Ducatis are best built at the factory in Borgo Panigale, where everything from the Cucciolo to the 1098R, via the 916, of course, has been made till date. In any case, Ducati is clear that they don’t make regular sportbikes. A Ducati is a luxury, a privilege, their bikes are premium sportsbikes and will never be cheap. Or common.

A lot of journalists at the press conference slowly understand that they’re looking at a two-wheeled equivalent of what a Ferrari is to the four-wheeled world. In a very real sense, there are Nissans and Toyotas that can rival the performance of the Red cars, but it isn’t the same thing. 500 bhp from a Japanese V8 will never be the same as 500 bhp from an Italian V8. It’s almost as if pasta-fed engines make more special horses, even when the quantity is identical. In a similar way, 180 bhp from the 1098R will always be distinct from 180 bhp from a far cheaper R1.

For those of you who’re like me, in the financial sense – a few hundred increments away – the Ducati stores will have merchandising and accessory sections, where you and I could indulge ourselves while we wait to become Ducatisti.