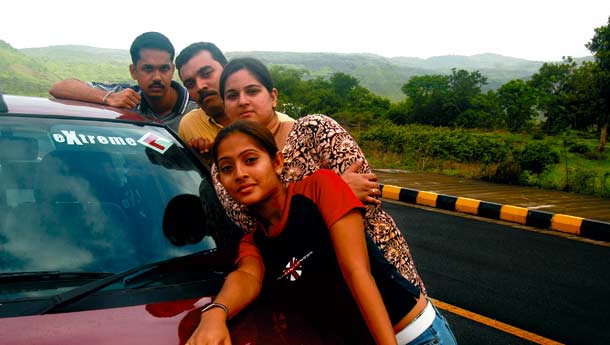 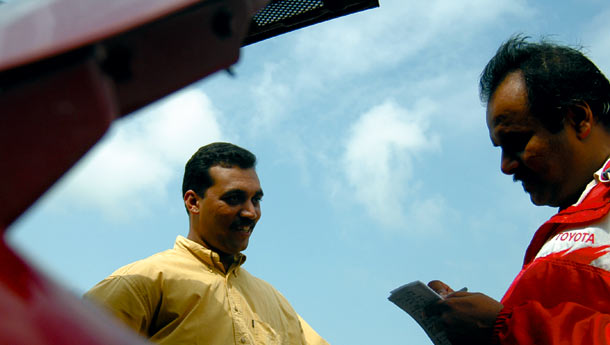 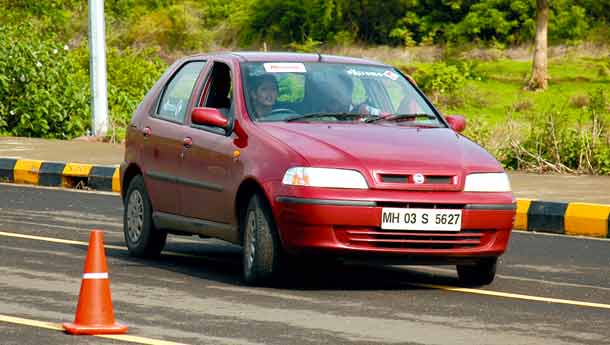 So television is killing print, eh? So you thought. Trust us, video never managed to quite kill radio and we’ll make sure that television co-exists with the print media. And as they say, you can’t take a television to the loo, can you? Maybe we were a bit bored with those never-ending comparison tests and competing with other motoring mags for new car scoops. Maybe we just ran out of ideas. Whatever the case may be, we came up with this crazy idea of doing what the AXNs of this world would have been happy doing. In print, though.


Take four individuals who have never, ever driven an automobile, teach them to drive in ten minutes, and, hold your breath now, make them test drive a car on a performance evaluation track. Essentially, a stunt that graduate people from being mere pedestrians to ace road testers in 20 minutes flat. Dear readers, Motoring presents ‘Extreme Learners,’ a fresh chapter in motoring journalism in India. The idea was to find exactly how easy or difficult it is to learn driving a modern day automobile, with the help of an extreme crash course, in controlled conditions, of course . We chose a road that was not yet commissioned for use and took the additional precaution of cordoning it off Just in case.

To begin with, we needed a car – and since no self-respecting car maker would want their automobile to be the tool for this exercise, we decided not to tell Fiat India we would be using their long term Palio 1.2 that was with us at the time. Sorry, Fiat.

Bijoy, our editor, agreed to play driving instructor for the day. And we don’t think he quite knew what he was getting into. Finding four individuals who harboured dreams of not just driving, but ‘test driving’ cars was the easy bit – we had far too many contenders and had to almost rudely say no to some. Of the four, three contenders came from our parent newspaper office. Sameer, Prakash and Pallavi represent the young brigade in Business Standard’’s Mumbai office and we were really surprised to find they had never been behind the wheel of a car. The fourth contender, Andrea, a second-year degree student from Xavier’s College, was coaxed into the event by Joshua, our intern. Most people who heard about the idea thought it was sheer lunacy and were confident that learning to drive in ten minutes was near impossible. Which convinced us that we had a story on hand.

The session was divided into three parts – a crash course, a road test and finally, an auto quiz. The first involved ten minutes of teaching to drive, the second an effort by the pupil at road testing the car, and the third, a set of spot questions meant to probe the contestant’s knowledge about things automotive. All four contestants started the session with a score of 100 points each. To find the ‘best natural driver’ of them all, the scoring pattern was kept simple – mistakes during the road test would cost points from the tally, while correct answers to the auto quiz earned points. May the best learner win!

Crash course
Pallavi was the first to get behind the wheel, actually surprised that Bijoy was asking her to take the wheel straightaway. He murmured something like ‘only ten minutes, make the maximum out of it.’ At 5’7”, she needed to adjust the seat and spent a whole minute getting comfortable behind the wheel, proclaiming that she knew the ‘ABC thing about pedals.’ Meanwhile, Sameer seemed instantly comfortable with the car, while Andrea took her own sweet time and a bit of help from Joshua for getting there. Pallavi learnt to check for the neutral by yanking at the gear lever, and the next moment was asked to fire up the Palio motor. She then stalled the motor immediately as she tried to release the clutch for first gear. Sameer started off fine, as if he had been doing this all his life (were you cheating, Sameer?), while it took all of three attempts to see Andrea rolling off. Prakash was a bit apprehensive at first, but he mastered the controls within minutes and took the U-turn at the far end of the circuit like a pro, which impressed Bijoy a great deal.

The first lap around our PET course was handled in first gear, with Bijoy having to step in with constant steering corrections. ‘When I tell you to let go, just leave all those controls,’ was his only strict order. And while on the move, Pallavi managed to get a feel for the accelerator pedal, while a nervous Andrea took her hands off the steering wheel and her feet off the pedals at least once. She was all too ready to get out of the car the moment it came to a halt. ‘Can I remove my slippers?,’ was the only desperate plea from Pallavi. She just had to get a hang of keeping the car going straight but was otherwise doing fine by the end of the first lap.   Coming to a halt involved a bit of panic, and three of them stalled the car in the process. The second lap was cleaner, and this time Bijoy didn’t have to take the wheel too often, except when Pallavi’s angle of attack got a bit extreme at the slalom section, and when Sameer wanted to emulate Makinnen at the U-turn. And yes, this time every one of the pupils came to a perfect halt. Each one’s ten minutes was over, and this meant, in accordance with the ‘Extreme L’ rules, the foursome had got all the training possible to drive a car. Did they think they could go ahead with the next session? ‘I want to reverse and brake..,’ we could hear Pallavi say. Andrea was not so sure about what was going on, while the boys looked absolutely cool and confident. Yup, the two boys certainly held an edge at this point (or were they putting on an act?)

Pallavi was smooth off the block – no hitches, no jerks and she carried a healthy 40 kph (for a learner) before changing lanes. She lost five points for a bit of weaving through imaginary traffic and five points when Bijoy had to intervene to correct her line. She was not very confident going through the slalom, which meant another five points debited and a further five when the instructor had to pull the handbrake to stop the car. She posted the second best time of the day for the road test though – brilliant!

Sameer: 2:16:53
Close to wrecking Palio: Never
Total penalty points: 7 (-5 for stalled engine, -5 for speeding. Bonus points: 3 for shifting gears)
Sameer, who had impressed Bijoy no end during the ‘crash course’ stunned everyone present as he lost
five points straightaway, stalling the Palio. Overconfidence? Perhaps. On the move again, Sameer drove extremely well and lost points only for speeding as he approached the U-turn. Perfectly executed gear changes (mind you, not many people can do that at first go without having to hear crunching metal), and an impressive slalom run later, Sameer came to a well-executed halt. But he did lose a great deal of time proving that whether it be Montoya or Sameer, stalling on the grid is not the best of ways to a good lap time.

Andrea: 2:12:08
Close to wrecking Palio: Twice
Total penalty points: 10 (-5 for steering correction, -5 for slalom entry/exit speed – way too slow)
Andrea was given a stern briefing by her friend and philosopher Joshua after the crash course and that worked for her during her road test. She was no longer nervous and was not shivering at the sight of Bijoy anymore. A perfect launch and lane change manoeuvre impressed the instructor, but the run had to be abandoned when a stray car entered our circuit. Once again, Andrea started off smoothly and changed lanes without any hitch. Bijoy had to correct her lane once and she lost points for being extremely cautious during the slalom run. If there was a Fast Learner award for the day, it would have certainly gone to Andrea.

Prakash: 1:54:14
Close to wrecking Palio: Never
Total penalty points: Nil
Prakash was all concentration as he took off in the Palio. He didn’t make the mistake that cost Sameer five precious penalty points, rolling off smoothly. He shifted to second and executed an inch-perfect lane change manoeuvre. He had to brake a bit hard for the U-turn, but our man was fully in control of the situation and Bijoy, though he was tempted, didn’t deduct points. And oh boy, did Prakash stun the crowd with his brilliant car control after that. His slalom run was bold and we were sure that given half a day to practice, he would take the car to top tyre performance levels. And, voila, a clear winner for the ‘Extreme L.’ Indeed, Prakash finished the run without earning any penalty points whatsoever.   Auto Quiz
Instructor (pointing at radiator): What is this?
Pallavi: ‘Hmm, that is certainly not the battery...er, it has a fan so it must be a suction thing?
Points earned: 0
Sameer: ‘Radiator?’ Points earned: 10
Andrea: ‘I know, hmm isn’t this the ventilator?’
Points earned: 0 (We thought seriously of giving her negative points)
Prakash: (As if it were child’s play) ‘Carburettor.’ Points earned: 0 (better than ‘ventilator’ for an answer, right?)

What the instructor thinks
Pallavi: She’s a quick learner but was a bit too excited about the whole thing. She has got natural speed and good reflexes, losing points only because she was edgy – something that can be easily cured. Again, her speed is really impressive and she has got the right attitude. If there were added points for enthusiasm and passion for driving, she would have won them certainly.

Sameer: This guy drove like a natural and seriously made me think that he has driven before. Great hand-eye co-ordination and excellent feel for speed are his attributes. A hint of over confidence did it for him during the ‘road test’ during which he stalled the car – spoiling his lap time in the process. But again, he is one hot prospect for the post of ‘road tester’ in Motoring. The idiot should have known what he was driving, though!

Andrea: She certainly knew nothing of cars but went back home as someone who could drive. (We learnt later that she had always wanted to learn, but developed cold feet after being shouted at in her first attempt itself.) While she proved to be a quick learner, she’s scared of speed and it will take a while before she can actually feel comfortable in traffic. Back to practice, Andrea!

Prakash: Came out tops, with a total of 125 points. Congratulations! The chap will evolve into one very good, safe driver. He was not as quick as Sameer but still managed a better time thanks to his nerves. He has got a feel for the car – especially its dimensions, and as the day progressed, proved he is good at understanding its dynamics too. Damn impressive!

Easy does it: Alright, what you are not seeing in these pics include two trucks and a lunatic in a Maruti Zen. You can’t hear the collective gasps of onlookers, either. The Palio was intact at the end of the day, though

Oops time: Andrea loses a truck load of points (left) Pallavi discovers the ‘suction thing’, Sameer wants to use a lifeline and Prakash sniffs his way to victory

Waiting game: Andrea can’t believe she just drove a car (above). Watch out learners, the Palio is out for revenge (right). Nail-biting time for the rest as Sameer drives the wheels off the car after stalling it at the start (right, below)