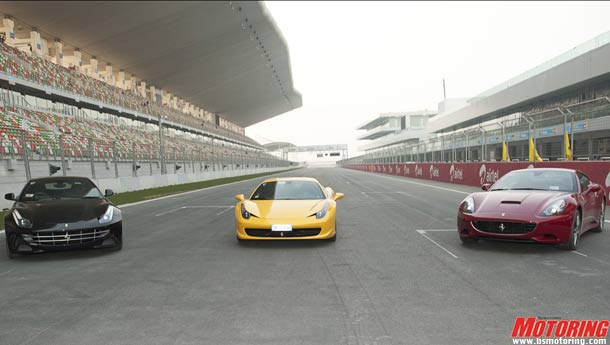 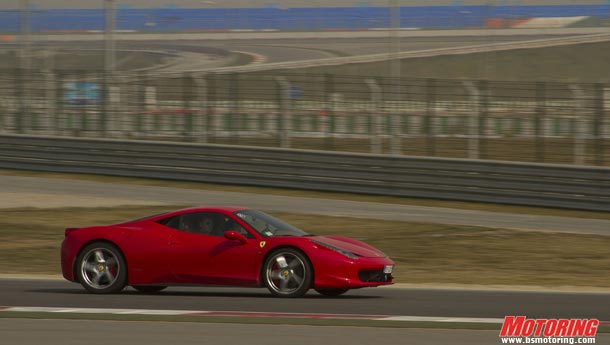 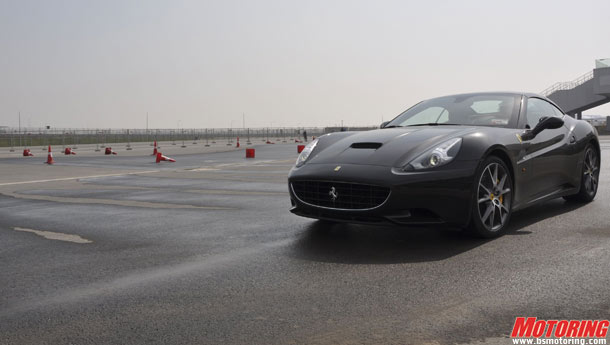 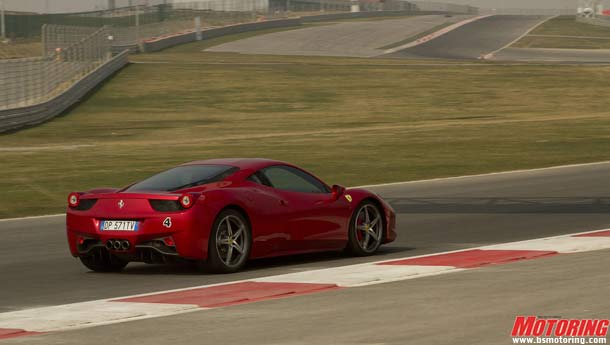 The stocky Italian instructor sitting beside me in the Ferrari 458 Italia wasn’t exactly fluent with the Queen’s language, but I could understand what he was communicating despite his mouth being shut. He was talking volubly with his feet, mashing an imaginary brake pedal every time I rammed the accelerator pedal home.

I tried saying “Relax, dude” in Italian — but that would have meant taking my hands off the steering wheel. As everyone knows, you can’t speak Italian without gesticulating with your hands. And I didn’t want to do that when the digital display read 206 kph. So I persisted in doing what any normal human being would do with a Ferrari — try to break the sound barrier with it. The numbers kept climbing and il povero signore was literally thumping the footwell with his feet, creating the opening notes for a nice Italian mambo. Or was that his heart that was pounding?

Well, what could I do? After all, it’s not every day that you get behind the wheel of Ferrari’s finest, that too at a circuit that is gaining attention from race drivers as one of the best there is. I was at the Buddh International Circuit at a programme organised by Ferrari and its Indian distributor to make motoring journalists familiar with their cars. After us, over the next few days, Ferrari customers and prospective ones would also have a go with the cars. The three Ferraris (the road-going models, of course) — the 458, the California Spyder convertible and the new four-seat grand tourer, the FF, were available for short drives. The convertible and the GT sessions were on the roads off the track, while we got the chance of a few hot laps in what is generally considered as one of the greatest driver’s cars around, the 458.

Unfortunately, the drives in the California Spyder and the FF were too short an experience and there is not much I can say about both these machines. But even the short spell in the new FF was enough to impress me. When it has a 12-cylinder motor, it sure doesn’t have to try really hard. The FF, despite the polarising opinions its looks have garnered, is a serious piece of kit. It has entered automotive history books as the first production Ferrari to feature four-wheel drive. Despite power from the 6.2-litre V12 going to all the wheels, the FF struggles to break free and it barely manages to be reigned by the electronics. The monstrous motor located at the front makes 660 bhp, while over 70 per cent of the torque is available at just 1000 rpm onwards — for an engine that makes its maximum output (and redlines) at 8000 rpm, driveability is sure not an issue. The potent engine and a terrific power-to-weight ratio means this grand tourer is essentially a high-performance supercar with four seats — Ferrari says it can attain 100 kph in just 3.7 seconds and go on to a top speed of 335 kph. Imagine a Ferrari with the ability to traverse sand or snow, accommodate four large adults in great comfort and manage to swallow some luggage too. A practical Ferrari. Whatever will they think up next?

Thankfully some things never change, like Ferrari making awesome supercars. The 458 Italia is like automotive divinity — it contains all the learnings that Ferrari has in making road and race cars and is a veritable technology demonstrator for the Italian firm. It is a car that has been designed to harness the wind that hits it at speeds to make it go even faster. Without losing an inch of grip or measure of control. It uses electronics that can be adapted to the situation or the driver’s mood — and when he wants, the electronic brain simply steps back. It features engineering brilliance, be it the V8 that won’t be out of place in a race car or the clever use of materials to keep weight down or a new intelligent suspension system that allows for compact packaging without sacrificing the dynamic quotient. And finally, it is a sensory experience — the wail emerging from the triple tail-pipes is good enough to make you convert your religion. 458, of course, stands for 4.5-litre, 8 cylinders and that Italia is there for a reason — this car is as much about the country as it is about Ferrari. Bunga bunga parties included!

Hitting the main straight of the BIC, I went hell for Italian leather. The magnificent track allows you to exploit the full potential of the 562 bhp and 55 kgm of the 4499cc motor that’s located behind you. Rapidly click-click-clicking the paddles actuating the seven-speed dual-clutch gearbox, the engine angrily howls with each shift, as the centrally placed tacho-meter needle hovers around 8000 rpm. The numbers on the speedo climb rapidly and even at speeds well above 200 kph, I have a sense of full control, notwithstanding the palpitations caused to the poor instructor. Why should he worry? The 458’s brakes with their unique pre-fill function shed speed like nothing else. And the car is so well planted that when you’re attacking corners, you have enough time to request him to use the walkie-talkie to ask the 458 in front to move aside so you can overtake. The feeling of control is always there because the steering set-up also is perfectly responsive to your inputs.

I certainly wasn’t going to let an antsy instructor stop me from exploring my potential (not the 458’s!) on the track. Completely ignoring the braking markers that were set extremely conservatively, I would tear down the approach to the curve, slam on the brakes while quickly downshifting, exit the curve and wham, back on the loud pedal. It may not have been the fastest way around the circuit, but I was not driving with an aim to shave off lap timings — that would come when Ferrari decides to offer us in India its Piloti programme. For now, I was just enjoying the blissful pleasure that only comes with driving a Ferrari on a track. Given more time with the car at the circuit, I am sure I would be smoother and faster, but for now, it was all about understanding what a spectacular feat of automotive engineering and passion this car was about. This car isn’t about rearranging your internal organs or scaring yourself silly. It is designed to be one with the driver; the more the driver gains confidence, the more it is willing to play along.

With the 458 Italia, man and machine are one. Now how do I say that in Italian? The writer was on a media invite from Ferrari to drive the cars at the Buddh International Circuit