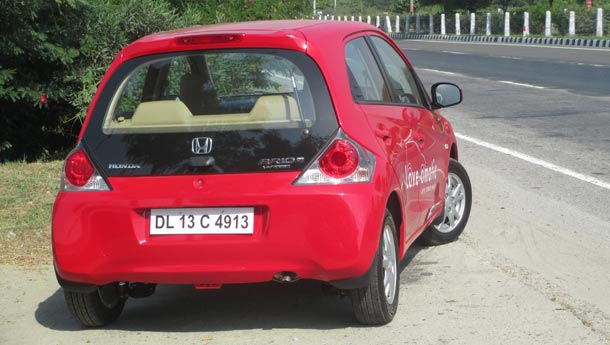 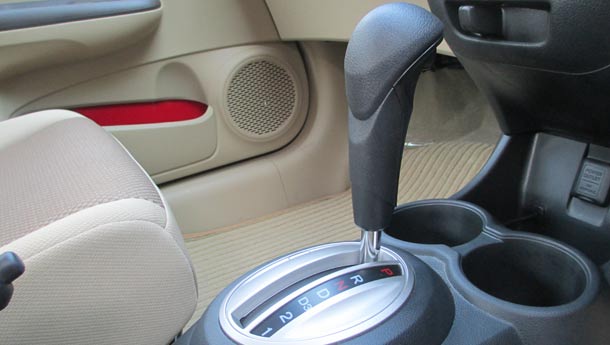 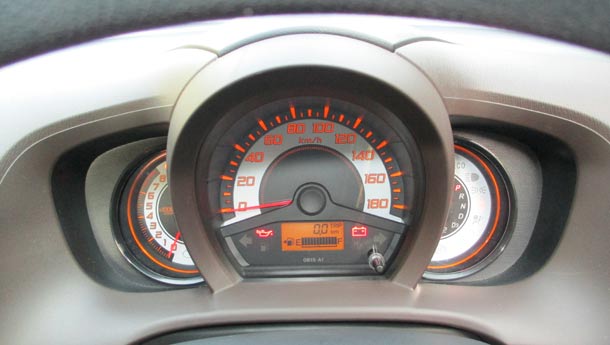 Compared to Mumbai, Delhi has very good roads. But unlike Mumbai, Delhi has too many roundabouts which, for some inexplicable reason, lead to even more roundabouts. And then, in Mumbai you generally head either up or down. In Delhi, you can head north, south, east, west, northwest, southeast, northeast or southwest and everywhere in between too. If you were to get lost in Delhi, it would be nice to have a car that does not add stress to your geographically challenged state of mind. So yes, to answer a question no one asked, I was in Delhi, I did get lost and I had a car that I didn’t have a problem getting lost in.

Meet the Honda Brio automatic. That too, not a four-speed one like in the Hyundai i10 or Maruti Suzuki A-star automatics, but a five-speed box. Not just that. You have the option to shift to only 3-speed mode or stick to either the 2nd gear or the 1st gear as the situation demands.

If Hondas have always been about the joy of driving, then the car has to cede control to the driver to give him the opportunity to drive the way he wants. So with this conventional torque convertor auto ’box, you do get the convenience of not having to change gears constantly and yet have the option of being in the gear you want. And that, to me, is the best part of this car. For instance, if you’re going up or down a mountain road, keeping the shifter in D3 makes sense because then gearbox shifts only between 1st, 2nd and 3rd. Or if circumstances require, you can keep it in either 1st or 2nd and it won’t shift up. And if you’re facing a sea of red brake lights, keep it in D mode and turn up the volume. And that is exactly what I did when I encountered a spectacular Delhi-style gridlock when I got lost.

Honda’s engineers have done a good job with the pairing of this transmission to the Brio’s 1200cc four-pot motor, without losing out on the ebullient characteristics of the engine. This despite the fact that it is engineered to shift early in the rev range to conserve expensive petrol. It is a responsive gearbox; okay it may not downshift as quickly as you’d want, but I would say its downshifts are reasonable enough. I have maintained that with the Brio there is pure pleasure in ignoring the green ‘Eco’ light that pops up on the instrument console; it is like your school teacher saying ‘very good’ when you shift to the right gear at the right time. The Brio AT is engineered to be a good student. Honda claims 16.5 kpl under ideal test conditions (it’s 19.4 kpl for the manual version). In my 100 km drive in and around Delhi/Noida, with all the regular traffic and highway stretches thrown in, the digital display read 13.4 kpl. Going by that, it's pretty good I would say.

But with the Brio, it’s nice to be naughty – rev the pants off the engine and the smile on your face widens. And that makes the MT version super fun. The automatic transmission curbs the excitement somewhat but not to dampen driveability. Pile up pressure on the throttle and the gears shift as quickly as possible and it gets to fifth. Is it quick then? Well, a snap test revealed a 0 to 100 kph time of 17.1 seconds. Our MT Brio’s test figures show how substantially quicker it is compared to the auto: 11.91 to 100 kph from standstill. Top speed of both is 140 kph.

Okay, so it’s not that quick. But you don’t buy the automatic version of the Brio to out-drag other Delites (Delhi-ites to others) at the stop lights, right? Well, if you want a gun pointed at your head, go right ahead. It is a commuting tool, and I dare say, with an injection of fun. That’s because the automatic transmission doesn’t rob the peppiness of the motor and yet, it is relaxing. Shifts are done early, by around 2000 rpm, and they are smooth too. At the same time, it takes up the slack very well and accelerates reasonably well to go with the traffic flow.

You can get the automatic gearbox in the V and S(O) variants of the Brio. As we were going to press, the price was yet to be announced. Expect it to cost about Rs 50,000 over the MT variants. With the automatic version of the Brio, you get a car that takes away the stress of the commute and one that gives you a degree of control as well. Plus it is efficient too. There’s no doubt about it – this car is perfect for the city. Any city.