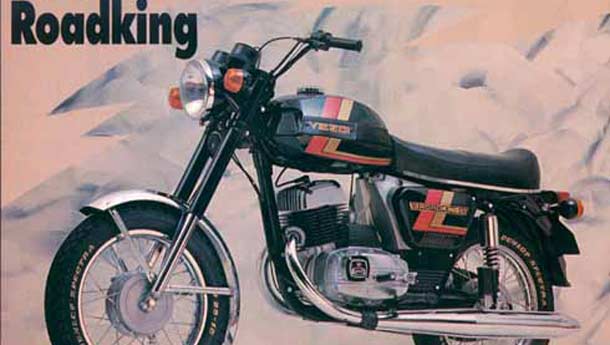 I've always been a dreamer. But of late, I've turned to dreaming in a somewhat pragmatic manner. And some of the biggest changes have been in my dream garage. Now, I look at it as an introspective exercise of the highest order. No being greedy and wishing for everything under the sun. Rather, it has to be something that can be turned into reality some day. Now that Valentinik's cafe racer makeover is almost done, I can't help but dream about What Next. And there are quite a few ideas buzzing around in my head like bumblebees waiting to be bottled. What makes it all the more difficult is that all of them are equally attractive propositions for me. Here goes.

1. A Yezdi, preferably a Roadking, with a red and white dust bin fairing evoking howling ghosts of 60s' GP racers. A buffed front drum brake from the RD350, two chromed expansion chambers exiting from the rear of the fairing, slick tyres and no lights at all. The objective? Clean, historic lines with a sound to die for. So what if it won't go above 100 kph? The black '1' on a yellow circle at the front will more than make up for it.

2. Next, a dark-as-the-night motorcycle that represents the... er, night. A bored-out cast-iron Enfield engine. Perhaps, a supercharger. And a subtle limbu-mirchi painted on the rear mudguard that reminds you to not take yourself too seriously. A bit too much? Perhaps, but there's nothing like this yet.

3. Scooters have been the topic of many a discussion in office since Bijoy's Roxanne came to life and I think it's starting to get to me too. Of course, my idea's a bit twisted. A Lambretta/Vijay Super with an RD350 engine stuffed into it would be the stuff to inspire the grandchildren for certain. And don't think it can't be done - just check Youtube. They even race those mad things, for god's sake!


4. Now this is one that is easiest to do. A Bajaj M80. Yes, by the time you're done laughing, I promise you that you'll have second thoughts. The idea is to make an M80 that's a pimped-out mean machine, so to speak. You've got to remain faithful to the M80's age-old red/white paint combo. Only, the red will be the brightest shade of DuPont, while the white will be replaced by a rich off-white. The two-stroke motor (bored out and ported) and expansion chamber (yes) will be deep chromed, while the foot pegs will be rear set. Good quality levers, grips and trim all around will make it more credible. Grip will be provided by a pair of R15 tyres (17-inch and just the right size), while the front might even get a little disc from say, the rear wheel of one of the big Bajajs. A single seat with a shapely bum stop finishes the job. And a little birdie told me that a running M80 can be had for as little as Rs 400 on the outskirts of the birdie's city. Still laughing?

5. And since I'm a mere mortal who worships at the altar of inline-four rice rockets, I want a superbike too. What dream garage is complete without a superbike, right? I always thought it'd be the 'Busa. However, it's another Zook that I have in mind now - the GSX 750R. All the power I'll ever need and the chassis to take whatever little I can throw at it.

However, what is apparent from this list of fantasy builds is that they're all based on machines that wouldn't really elicit a second (or even first) look from most people. And one thing is without question - they're all going to be gigantic fun. Now, while I plan how to raise the moneys for these two-wheeled dreams of mine, you can tell me what your dream garage looks like. If you plan to go ahead and borrow these ideas, that's fine as well. Just make sure that you send in photos! Since I'm always dreaming, I'm sure I'll come up with something else before long.