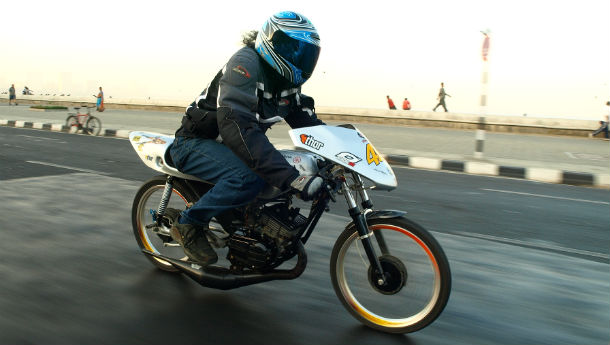 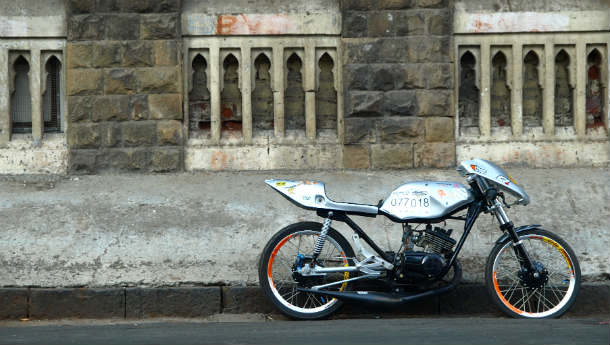 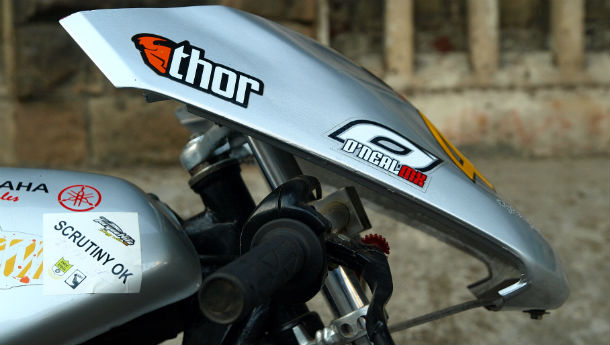 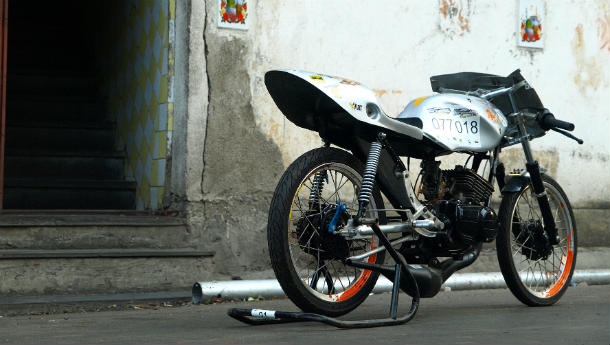 I love four-stroke motorcycles. I even learnt how to ride on one. But there has always been a certain mystique (it looks suspiciously like 2T smoke) surrounding stinkwheels in my mind. And my experience with them has been all too brief for my liking. Since no Summer of Speed issue can be complete without a rip-snorting, fire-breathing two-stroke, we got our hands on this, a highly fettled-with RX135 that does the quarter mile in just over 13 seconds and was the winner in the Indian Open class at a recently held drag meet.

Nothing this puny can be so loud and fast. But it is. As a means of turning people around you deaf, this bike must have few equals. Pablo will vouch for it. And I will vouch for the fact that it is thrillingly, which later turns into terrifyingly, quick. But first, we had to start it and it comes without the luxury of a kick starter. This bike has shed more weight than a supermodel on Atkins. Which was just as well because Ajay, to whom this bike belongs, had to push me (I’m on Fatkins, by the way) and the bike up and down the road until the worked-upon motor took mercy on its owner and crackled to life. And all around, hands went up to their respective ears.

One look at it and you know that form follows function on this one. I have seen supercars that have better ground clearance than this little monster. The expansion chamber is positioned in as straight a line as possible to ensure optimum gas flow into the fat collector unit. The weedy tyres that wrap around the lightweight alloy rims look like they belong to something powered by pedals rather than something that hits 130 kph before the traffic policeman who heard you coming from a mile away, saw you and blew his whistle. Anyway, his fingers had forgotten his whistle and were busy protecting his eardrums as I vanished in a cloud of smoke. Seriously, this bike comes with the two-wheeled equivalent of a sonic boom whose shockwaves threaten to shatter window panes and car windscreens as you pass them and early morning joggers started running faster as the bike neared them. No wonder I was the most hated person on Mumbai’s most famous promenade that morning.

It is built to go hell for leather (fibreglass, actually) in a straight line. The bodywork you see is all fibreglass, and is as flexible as an empty pack of cigarettes. Hmm. Cigarettes, two-strokes and smoke. There is a connection in there somewhere. The ‘fuel tank’ is a long piece of flexible hose, much like what you see attached to washing machines, and to plug it, you have a nice big piece of cork. Brilliant. The number of holes on this bike would give a sieve an inferiority complex. The drums, fork brace, the steering head, all have orifices of varying sizes drilled into them to shed as much weight as possible. The motor has even lost its head (heh heh), most of it anyway, and the central spine of the chassis that connects the main beam to the swingarm pivot has been chopped off to shave the last ounce of unnecessary weight off the bike. A heavily forward-set pair of clip-ons and equally tortuous Yoshimura rear-sets anchor you to the bike, while lots of stickers all over the bike round off the package.

Not that I noticed any of that, busy as I was looking for the slightest opportunity to twist the quick-action throttle and get into the wafer-thin powerband. The bike does hustle at low revs, but it is nothing compared to the way it simply takes off once you hit the sweet spot in the rev range, leaving you wondering why people felt the need for a jet engine to be invented at all. When it all comes together, the lantern-sized flat slide carburettor empties its contents into the ported block, which sucks the mixture in like a black hole and the motor goes into a frenzy. All hell breaks loose as the RX turns into a deranged lunatic that just ripped its straitjacket right off and got its hands on a chainsaw. Knowing that you are along for the ride provides little comfort as you are unable to do anything other than keeping the throttle plugged, shifting gears and hanging on for all you are worth. To get an idea of just how powerful this RX is, I only need to tell you that the front wheel comes up a good few inches with every single gearshift. This despite my weight being so forward, I was almost ahead of the bike! What you need is precise throttle control to open it only as much as required rather than twist it to the stop, which is how I was going about it. Into a gentle sweeping corner that I do not even notice on my commute, I leaned it ever so slightly and the front and rear tyres gave way. The only thing that saved the ship was the fact that the expansion chamber touched the road and the bike bounced right back up!

Even though my ride on the bike was brief (again!), it was enough to bring back memories of a very important detail: it does not stop. I cannot tell you enough how scary those drum brakes are if you ever get up to speed on this thing. I am sure it needs more road to slow right down than to get to its top speed. Another thing that struck me was the absence of a steering damper, a must on a bike that has such a flighty front end. Either that or you get yourself a pair of sinewy forearms like Ajay, who has competed in national level swimming championships. I will take the dampers, thank you very much. Ajay also has another bike for everyday use. It has an electric starter, front and rear discs, rear monoshock from the Unicorn, digital meters from the FZ16, a nifty paintjob and the drag spec engine with a smaller carb. It also comes with an appetite for endless second gear wheelies, making it a good city runabout.

Riding the drag bike on the road was an occasion and a half. You see bikes like these at drag racing events all the time and I am sure that more often than not, you overlook them for the more exotic machinery that shows up at such events. No bad thing, but the next time you are there, do spare some time to look at these domestic exotics. There is something about these home-made specials that tugs at your heartstrings; sort of like home food and restaurant food. And the best part is that you can do it all yourself! Get an RX, strip everything, blow the engine and go for it. Of course, it is not that simple, but you will pick it up as you go along. But be sure to take it easy around a graveyard. It just might wake the dead.