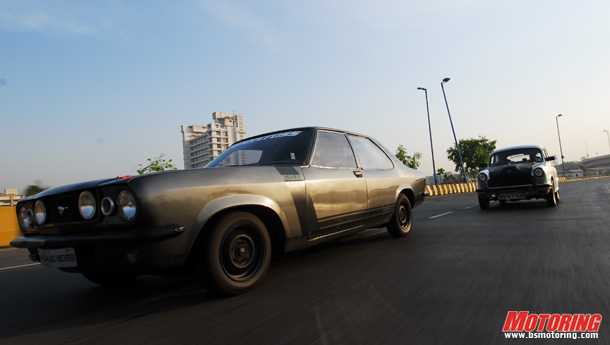 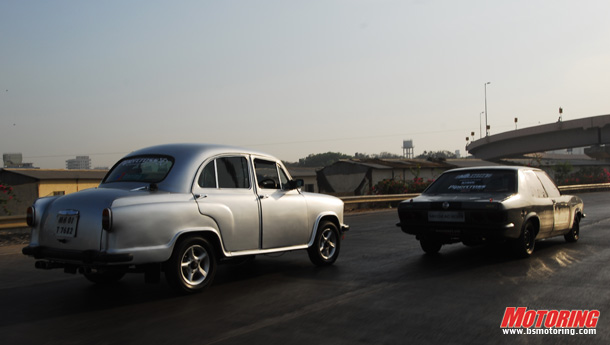 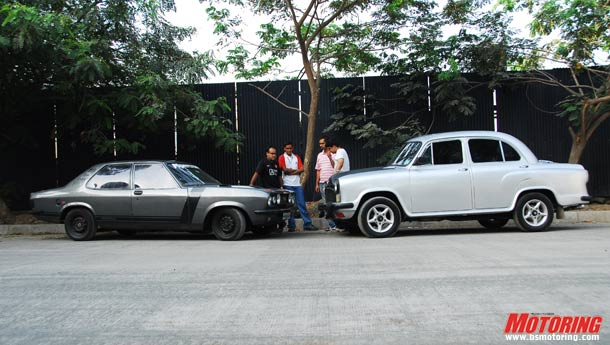 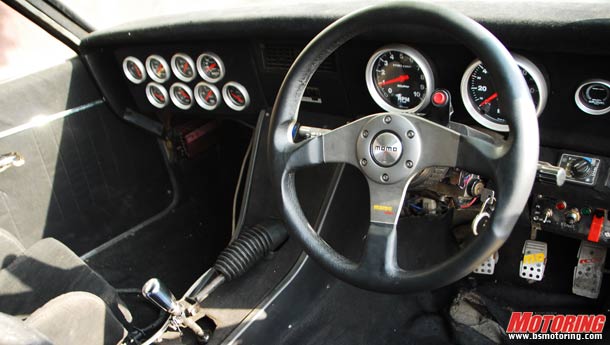 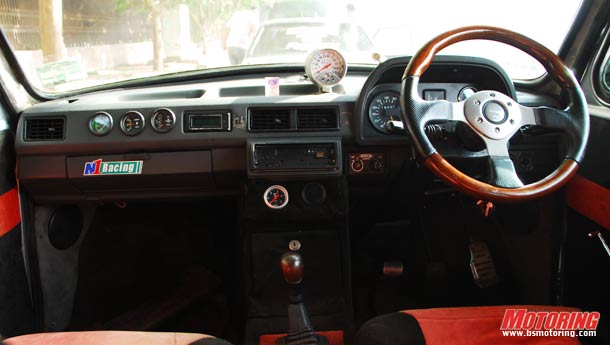 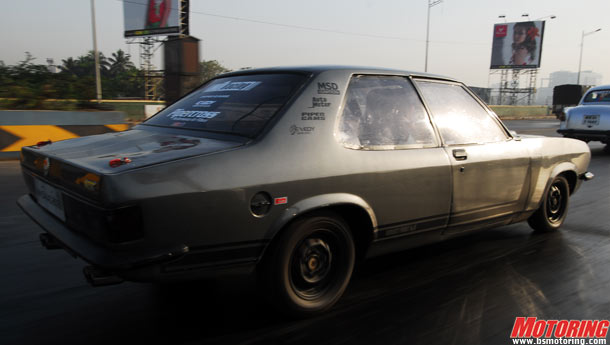 My shirt was drenched. It was getting difficult to breathe in the hot confines of a car that had only plexiglas for doors, but the driver was an island of peace. He gently rubbed off his sweat with a tissue paper and then, floored

the throttle. Ludicrous, absurd, irrational. The corner was coming up fast as the dozen odd dials on the dash started to move in their respective orbits. Then as the road curved, he yanked the handbrake and the car gently let its tail out. He

over-corrected for a fraction before the tail kicked back in. Insane, idiotic, incomprehensible. Separated by a can of nitrous oxide on the central tunnel and a vast gulf between two schools of thought, I sat on the side of the chasm that now wanted to cross over to the other side. How could a car, whose genesis roots back to the 1970s, be so quick as to keep well-tuned Mitsubishi Lancers honest in a drag? Shouldn’t it just heat up, sputter and die? Disbelief, disbelief, disbelief!

Then as we got out of the car to catch our breath and wipe our brow, a pristinely maintained, yet pleasingly throaty Ambassador rolled up to join the party. It looked factory fresh because it’d rolled out of the paint booth the evening prior to the shoot. A 1979 Ambassador and a 1986 Contessa, both should be part of a story whose slug should have read Long Time No See, and yet, it’s right here, carrying an Issue Special tag. That too in an issue that reads Summer of Speed. Something must be wrong, you say. Nothing is.

Surviving the savage sensory double whammy of volume and velocity that morning was enough for me to find solace in these archetypal cars of days gone by. One that rubbed (and continues to rub) the egos of bureaucrats the right way, the other a quintessential chariot for the once mighty chieftains of large corporations.

For the untrained eye, the pair here might pass off as Q-cars, but look closer and things start to appear distorted. Anant, the calm and collected hand behind the wheel and fortunes of these cars, points towards the rippled doors of the Contessa, then mumbles something to the tune of FRP. He also quickly adds more details like missing rear doors, a missing rear seat, the papier-mâché-like bonnet and boot. But the pieces that take the cake are the plexiglas for the windows. With no window winder mechanisms either, Anant managed to save 20 kilos. That might not sound much to you, but put it in percentage terms to a specialist in drag cars, and 1.6 per cent sounds like a windfall.

The Ambassador has just a lightened bonnet with fatter rubber and alloy wheels for weight saving measures, but that’s just as far Anant wants to go with it. Besides being his daily driver, it’s also been a part of the family for the last thirty years, so sentimental values take precedence over disembowelling performance through weight saving measures.

Ornamentation is kept to the bare minimum, some of it guffaw-worthy. Like the leaping cat pinched off a Jag to adorn the bonnet of the Amby – ostentatious in the Indian context, but blasphemy for a Morris-doting Brit. The Contessa could easily pass off as a pretender that’s a cross between a 1970s Aston and a Mustang. But Anant is unfazed by such commentary. Focus lay on two factors and two factors alone: 1. a lightweight pair 2. of rear wheel driven cars. Rice rockets with outlandish body kits and power figures to spin the front driven axles to dust just didn’t catch his fancy.

His Amby did. And Rs 25,000 later, the Contessa became its bench partner. He then dumped the Amby’s original 1.5-litre engine for the 1.8 Isuzu drivetrain and began work on the twins. He just took a couple of Piper high lift cams, ported and polished the heads, placed MSD ignition units, dunked in iridium spark plugs, Pipercross carburettor filters, a Nikki double-barrel carburettor with oversized jets and MagnaFlow exhausts. For the Ambassador he placed a shortened differential, while the Contessa got a 50-shot (50 hp) NOS can and oversized pistons. Stiffer suspension, Momo racing wheels and pedals and racing seats later, the two were proper Stage-1 competitors – just short of placing turbos and intercoolers.

When you crank the Amby, there’s very little to tell you that it’s now up to nearly 100 bhp. Doesn’t sound much, but for an Isuzu engine that’s probably feeling a bit stressed; it’s the equivalent of strapping on a couple of jet packs on James Bond. Floor the throttle after the delayed ignition and a sonorous exhaust note envelopes you. Just as you nudge the throttle, the car surges ahead instantly. So instantly that if I were hard of hearing and couldn’t differentiate between the idling of an Isuzu and a tractor, I’d have sworn I was driving an electric car with all that torque at zero rpm. At a little under quarter throttle, it surged ahead like a bride pulling up her gown to run away from the altar. Whooooor, whooooaaar, whoooaaaaar, the exhaust note just kept me enthralled as I kept ignoring the shift light in my peripheral vision. Thack, crack through the gear lever and the car kept rolling ahead like it was a bowling ball. And sure enough I was warned by Anant’s friend that the brakes were not to be relied on one bit. Despite shifting to disc brakes at the front, the surge from the Isuzu mill overtook everything – the otherwise grippy 15-inchers included. And I’am glad that it worked that way because Anant was coming up real quick in his Contessa. The duo together sounded like a pair of bassists competing for a decibel derby. This one, though, was being won by the Contessa.

The Amby’s doors might shut like the clacking of an Enfield rifle, but it’s the Contessa that sounds like a Tommy submachine gun emptying its barrel of .50 calibre bullets when accelerating. With the 4x2x2 pipes playing Pied Piper, the Contessa went for the bass button. A moment of silence. Brrrmmmmaaaarrr, Bbbrrrmmmaaaarrrrr, ghaaaarrrr, phut phut, ghaaaarrr went the exhaust as the unburnt fuel particles pinged against metal. The short shifter on what was once the Vauxhall Victor put two, correction, three car lengths between itself and the once Morris Oxford in no time. The world started to pass in a blur, but I soon realised it was more down to my trembling arms and knees that my vision was distorted rather than the car actually covering ground at a serious pace.

The speedo wasn’t running faster than normal, nor was my heart skipping a beat. It actually skipped several. The Contessa was becoming visceral because the long hood, the wafer thin doors and my lack of appreciation for old metal was culminating into an experience with no parallels.

The last time I drove a drag special, it threatened to throw me out of the cabin. This one didn’t do that, but kept warning me, ‘I’m gonna kill you, I’m gonna stunt your family tree’.

That’s exactly what these cars are – brutally honest. Anant could have followed the hundreds of thousands and tuned a Jap tin can, but he didn’t. It doesn’t matter if the Amby can cover a quarter mile in

18-odd seconds or the Contessa can do it in 16, when the Jap cars are going in the high 13s-low 14s. He plans to replace the carburettor unit on the Contessa for a fuel injected one, but that’s as far as he plans to go. Maybe, he finds the world’s fastest road legal car – a 9.3-litre, 2200 bhp Vauxhall Victor at that (YouTube it) too much of an overkill. His cars prove that horsepower and a car with a tuned chip aren’t everything. Some clever, ingenious yet simple methods can not only help make your car quick, but retain that fine grain called essence.

We’d like to thank Anant, Anupam and the gang at N1 Racing for this story. They can be reached at n1engineering.com or