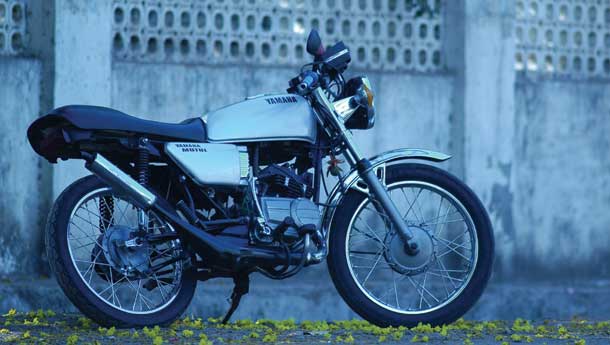 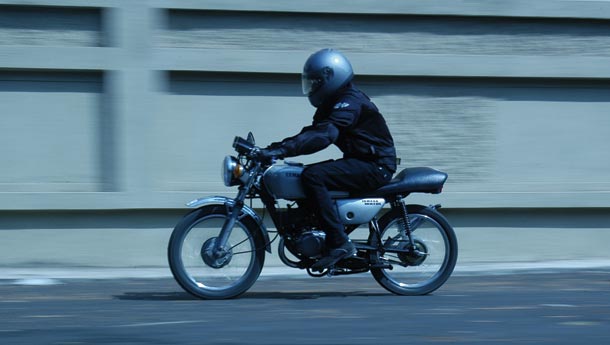 Okay, this is not amusing anymore. I’m about 5’11”, which is a decent amount of altitude even if I say so myself. I like my bikes fairly hefty, with enough height on them for me not to have to bend myself into a yogic posture on the seat. Given this preference, it isn’t surprising that after about six minutes on Yogesh Sathe’s wildly-modified drag special RX100, my back feels like some-one drove a poker rod through it. My teeth are also rattling to the point that I fear for the safety of my fillings. You see, the bike I’m riding has had its suspension drastically lowered. My spine is the rear shock absorber – well, actually there’s a pair of old Eliminator rear shocks – and the front fork sliders have been chopped too; smaller suspension components, less weight. The end result of all of this is an extreme riding position and an ability to transmit every undulation on the road directly to the brain. Still, I remind myself that this bike was purpose-built purely for ferocious straight-line performance, not a toddle down to the market.

I persevere and search for a reasonably long section of road where I can let this ticking time bomb loose. Hiccuping and coughing along at about 3500 rpm, the bike is clearly unhappy about the current state of affairs – like all two-strokes, it wants to hit the powerband ‘Now!’ and cling to it for dear life. All this ambling about is definitely beginning to get on its nerves. Even at the low speeds I’m currently doing, the soundtrack coming through its Proton expansion chamber is deafening, and I quickly pull in the clutch and coast as I pass a hospital – the last thing I need now is a few cardiac arrests on my conscience.

Ah, there’s a promising stretch – a good 80 metres long, well-surfaced, no traffic, a few dozing building security guards. I do a recce along the stretch just to make sure there are no nasty surprises; gravel, hidden potholes, speed-breakers and so forth. The coast, thankfully, is clear – time to light the fuse and stand well clear. I crouch over and grasp the clip-ons (with anodised aluminium grips, very cool), position my feet well back on the home-made rear sets and take a moment. Revs dialled in, a slightly rough shift into first and I’m off.   The bike darts forward eagerly, but not very much more eagerly than a stock RX. I keep going, though, bracing for the kick in the pants that is sure to follow. The exhaust note is now getting more strident, more purposeful and really bloody loud; those security guards are now wide awake. I can feel the bike wind itself up as it nears 6000 rpm and I’m sure it’s grinning. At 6000, it hesitates for a mere fraction of a second and then lets rip. It quite literally screams down the road, eating up the metres at an astonishing rate, and I’m half-terrified, half-ecstatic. By rights, I should now be an active participant in the mother of all tankslappers, but a GSX-R750 steering damper is earning its keep. The 17-inch rims (with Bajaj M80 tyres) ensure that acceleration is pupil-widening, and there’s absolutely no letup in thrust as my peripheral vision blurs.

80 meters isn’t much when a bike is going this fast, and I’m soon about to run out of road. This machine is single-minded – it goes very fast in a straight line and to hell with everything else. Problem is, ‘everything else’ includes stopping power. The tiny drum brakes are, quite frankly, ludicrous on such a potent bike, but I’ve sussed that out on the recce and clearly identified a braking marker. It’s touch and go as I try and haul it in before it wraps me around a lamp-post, but luckily my guesstimate has been accurate and it squeals to a stop. ‘&%$@!%$ hell!’ is all that is going through my mind. What’s a man to do when he’s just scared himself silly? Naturally, the answer to that is ‘Do it again’, so I do – several times. I only call it a day when my back begins to beg for mercy, and when the guards start yelling at me to clear off or else. You know by now that this thing is fast, but why is it so fast? The answer is a crash diet to reduce weight (hence the binning of all non-essential parts, smaller wheels, chopped fork, et al) and a worked-on engine.

Yogesh started by cutting the fins off the head and drilling holes through what was left; this shed weight straightaway. He then thoroughly ported and polished the head, slightly modifying the pistons while he was at it. This done, he put in a flat-slide carburettor for instant throttle response and more power (the larger slide lets in more fuel) and lightweight fibre reed valves. Rounding things off, a high-resistance power cord (for a fatter spark) went on to the spark plug. In the offing is a digital ignition system, which will allow Yogesh to play with advance/retard settings and, crucially, will shave more weight off the bike, since the CDI and magnet will both be done away with. How quick it’ll then be is anyone’s guess, but I’m willing to bet it’ll be eye-watering.

This, then, is a completely demented machine. It’s incredibly uncomfortable, totally impractical for anything other than a 400 metre straight line and loud enough to be illegal. It’s also a vial of adrenaline straight into the business end of things, and I love it for that.