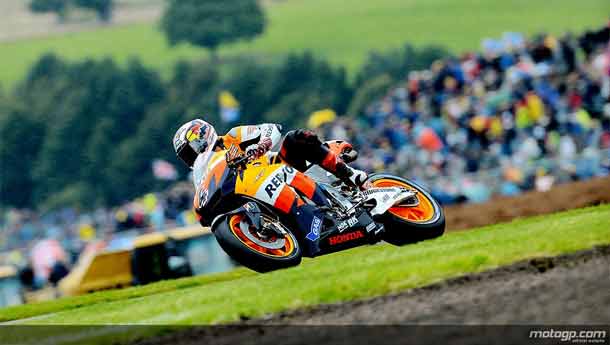 Honda's Andrea Dovizioso took the first victory of his career at the highest level in Donington Park's last race, even as Valentino Rossi crashed out of the lead due to extremely tricky conditions. Rossi began from pole again, while Dani Pedrosa, Jorge Lorenzo and Casey Stoner lined up behind him. Stoner and team mate Nicky Hayden were the only ones to gamble on wet weather tyres, while everyone else started with slicks. The decision would prove to be disastrous, as it never really rained heavily for the duration of the race, with only just enough rain to make the track slippery in some parts. At half race distance, Stoner and Hayden were already lapped by the race leaders. The weather conditions would claim race leaders Lorenzo and Rossi too, but while the former's bike was in no shape to continue, Rossi picked up his bike, rejoined in 11th place and went back up the order to finish in fifth, still a better result than his title rivals. That left Dovizioso in the lead, as team mate Pedrosa went backwards as the rain got worse towards the end. Colin Edwards and Randy de Puniet came in second and third, while Dovizioso clinched his maiden victory. This is Honda's second victory of the season, and the first time since 2006 that both Honda riders have won in the same season.
RESULT: DOVIZIOSO/EDWARDS/DE PUNIET