“Following the withdrawal of the subsidy for diesel, the narrowing price gap with petrol has impacted demand for diesel cars. For us, there is a small shift in favour of petrol,” said R S Kalsi, executive director, sales and marketing, at Maruti Suzuki, the country’s largest car manufacturer with a 45 per cent market share.

Kalsi said discounts for individual models were in response to market fluctuations.

“If market forces are moving in one direction and we want to maintain traction, a tweaking is required. We have to create demand at times by giving a higher discount. It is market driven,” he added.

The share of diesel vehicles sold in 2014-15 was 37 per cent, down sharply from 42 per cent in the previous year and 47 per cent in 2012-13, according to the Society of Indian Automobile Manufacturers.

In April-May 2015, diesel vehicles’ share of sales fell further to 34 per cent.

Since diesel prices were freed by the government last October, they have moved in line with the market. In May, the price of diesel went up by 10.7 per cent, identical to the increase in the price of petrol.

The price gap between petrol and diesel was down to Rs 11 a litre in October from Rs 18 in January last year. The gap is now Rs 16.40 in Delhi. 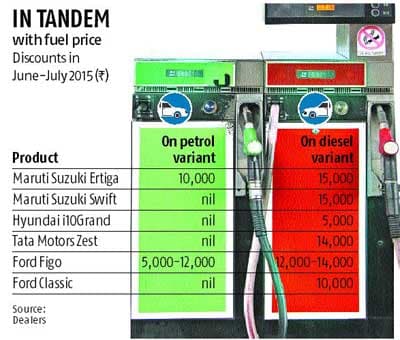 “The petrol-diesel vehicle demand ratio is changing based on the price differential. You have to keep adjusting production. Take the case of the Honda Amaze. When we launched it in 2013, the diesel share was 80 per cent. Now, diesel is 45 per cent,” said Jnaneswar Sen, senior vice-president, marketing and sales, at Honda Cars.

Maruti Suzuki, Honda and Hyundai invested in diesel engine capacities in the past four years, when the demand for diesel cars was high.

“We hope to utilise the capacity with the introduction of new vehicles,” said Sen.  Honda re-launched the Jazz after more than two years in both petrol and diesel variants on Wednesday.

The price gap between the entry-level petrol and diesel variants was Rs 119,000, about 22 per cent more than the petrol version. Sen said the differential was driven by the higher cost of technology in manufacturing diesel vehicles.