Dirt Bike School - On any Sunday 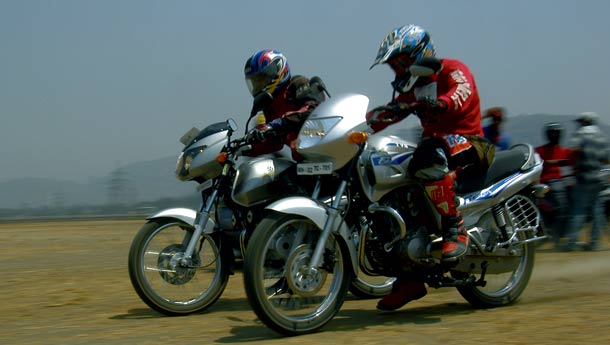 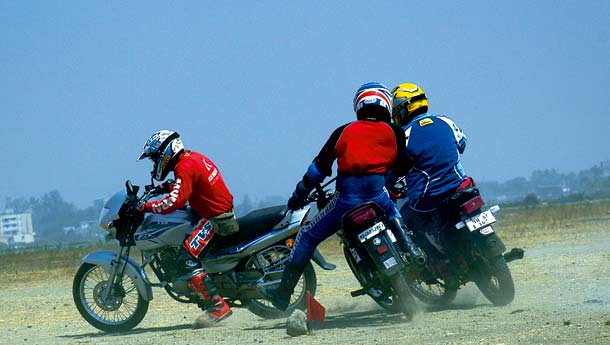 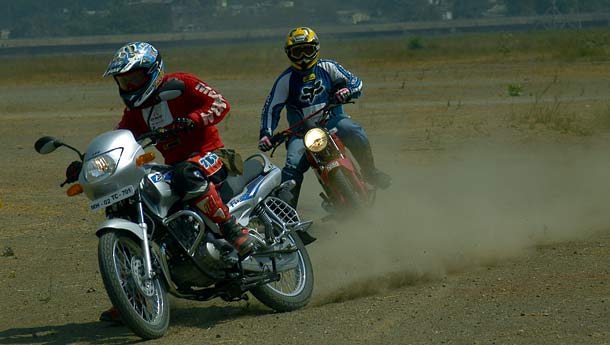 I am no gravel-chewing motocross monger. My only dirt riding time was at the TVS track, where it was quickly obvious that the next Ricky Carmichael I was not. I took with clenched gluteus and teeth the plunge on a Victor. Which promptly dumped me. After a full day at the track, I came away exhausted and thrilled with aches and pains everywhere. Now, sitting at my keyboard, all of those sensations are present and correct.

Not leaning towards the once bitten twice shy adage, I’d still wanted to get a bit of dirt experience under my belt. The Ace Machines Riding School was just the solution I was looking for. This process started last year, while I was hanging out at the TVS pit during the Pune round of the MRF Motocross. Between races, Rustom Patel mentioned in his articulate manner that he ran a motocross school in Mumbai. Rustom, a two-time National Motocross Champion and Gulf Dirt Track Champion (among a whole list of other wins) says while his students are largely motorcycle-mad college-goers, some older riders usually join in. On this particular day, we have a lady who intends to compete professionally and one motorcycle journalist. Me.

I come up to the ground, soaking up the heat dreaming about a day packed with laps aboard our long-term Pulsar 180 DTS-i. A daydream which is shattered immediately. We gather into a circle, for a warm up. I cannot even remember when I last exercised for its own sake. By the time we’re doing shoulder rolls, I am already breathing hard. Then, we jog a bit, sprint a bit more... When I finally clamber on to the Pulsar, I am panting like a Saint Bernard dune surfing in the Thar.   Rustom, on the other hand, hasn’t even broken into a sweat. He points to the red flags in the ground, pounces on an unsuspecting Fiero F2 and proceeds to do two demo laps. Ostensibly meant to show us the lay of the land, Rustom ably demonstrates where the best powerslides can be had and just how stylishly a simple U-turn can be taken.

Collecting our jaws off the dusty ground, we roll off meekly on to the track, at ten metre intervals for practice laps. The course is a flat-track, with three U-turns and a sweeping right-hander that is seemingly without end. With a hundred-odd places where a spectacular dump can be had on demand.Two laps in, I’m doing pretty well. I’ve only been lapped by a chap on an LML scooter (with knobblies), two whippersnappers on RX100s and three times apiece by Rustom, Badal Doshi and Zubin (Rustom’s bro and godlike figure in Indian motocross). Doshi, the second instructor, is a nine-year MX veteran and an ex-factory rider for both TVS and Yamaha.

My ego cannot sink any further. Then Rustom rolls up to my elbow. ‘Not bad for a novice!’ But before I can break into a thankful smile, he is on about the various problems with my riding. All with origins in my severely road-oriented riding style. He wants me to be more aggressive with the throttle and most importantly, to get off the front brake. And I do. But more on that later.Two laps more, and Rustom’s back. This time, with tips on body positioning. That includes two full laps of following him around, watching how he places his body for corners to maximise traction and control weight transfer. This is very important – sticking out a knee in corners at a dirt track is like chugging a cup of milk at your friend’s bachelor party, right?

A few more laps and I need a break. As I pull up to watch the rest of the lads churn up the dirt, Rustom, Badal and another quiet chap, Kaushik, join me. Rustom gives me the background on the club. It seems our man was winning some karting event somewhere when he met Kaushik Shinde. This typically quiet karting fanatic thought up the idea of a club, and it was the Rustom, Badal, Kaushik trinity that set up the club, which is now in its second year.   Badal explains, ‘We had no one to teach us and learnt on our own, with trial and error being the sole teacher.’ Rustom adds, ‘The school is a place for new riders to learn, without having to resort to trial and error, in a safer environment.’ While Kaushik handles the logistics and registrations end of the school, Badal and Rustom teach. Rustom is a TVS factory rider, so when he is off racing, Zubin takes on teaching duties.
While I am still recovering from my exertions, my instructors have the track to themselves. They are absolutely pelting away, inches from each other, trying to reach the next corner first. This, on street-tyred Fiero F2 and Shaolin, versus knobbly-ed Shogun. Nice!

Sometimes, these races happen even while there are novices are on track. That is pretty scary. However, Rustom and Badal have this god-like ability to materialise, criticise and instruct through all the racing, laughing and dust.

I finally think I am close to finding my dirt legs. I think my lines are smoother now, the Pulsar is swinging about ever harder with wheelspin. That is when Rustom’s warning – get off the front brake – kicks in. I get off all right. I lock and lose the front, fly up and forward between the mirrors and land in a clumsy heap. Param, as usual, is at the right place, at the right bloody time.

Once the lads establish that I’m injury-free and in one piece, they have a good time, pointing and laughing. Rustom tactfully suggests a less taxing exercise – racing starts. ‘How do you hold the clutch?’ He watches in utter dismay as I wrap my podgy paws around the lever. He then shows me how to hold the lever for maximum effect and we go through a whole stack of racing starts. I even beat him often enough. He can’t stop patting my back excitedly. Until he realises that I am on a Pulsar 180 DTS-i. No replacement for displacement, eh?With absolutely no energy left, I just have to call it a day. As I roll off from the track, having said the various good-byes, I have a little time to reflect. It has been a lovely day. My fears about the too-loosely structured instruction format are allayed. Fifteen to thirty students between two instructors might sound like a bad idea, but Rustom, Badal and Zubin obviously make it work pretty well. Besides, three hours of riding in the dirt is not without its own intrinsic education.Look at me, for instance. I am sure my riding still sucks in the dirt. But I thought I was stringing them corners along better by the end. Heck, I was even showing signs of aggression on the sweeper, with leg hung out correctly. I am still no gravel-chewing motocross monger. But you ain’t gonna lap me quite so quickly next Sunday.