Dilemma over style vs brand 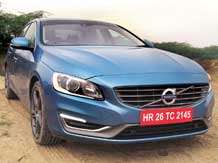 Every now and then a car enters the scene and makes a statement that may worry the alpha machine in that segment. This is exactly what Volvo has done. At least it can be said that the Swedish carmaker has tried to break the monopoly of the German trio of BMW, Mercedes-Benz and Audi in the luxury segment. Volvo's S60 is easily the most radical-looking car in the entry-level luxury sedan segment. But stunning looks aren't everything. The car has to command respect. It is in this spirit that we pit the new Volvo sedan against its close rival, the Edition C from Mercedes-Benz, and see where the competition takes the two vehicles.

First things first. If it is just the brand that entices you, then the Volvo stands no chance against the legend of the Merc. But if you so much as stop the Volvo logo from interfering in your assessment, you will find the S60's flamboyance sweeping you off your feet. It is not only one of the sportiest-looking sedans, but it makes a grand statement with its contours. People will ask you, as they did to me, "Since when did Volvo cars look like this?" The S60 is flashy but pleasing to the eyes with its wedge-like exterior. The front grille has a new horizontal design which makes it look more aggressive, and with the headlamps reworked to look sleeker with the new LED lamps, the sedan is a sight for sore eyes.

Mercedes-Benz, on the other hand, is in a celebratory mood after having logged the sale of the 10 millionth C-Class since its introduction in 1982. At a glance you might not be able to distinguish the Limited Edition C from the regular C, but you need to scratch the surface a bit further to notice the AMG styling kit. The front grille is no doubt bolder as it comes with a unique design unlike the regular C. Add to it the blackout headlamps, new two-tonne alloy wheels, flared-up side skirts and bumper, and you know the Limited C, of which only 500 are available in India, is making an effort to look different. Yet, most of the time, you would mistake it for just another C-Class. Quite frankly, the S60 just outdoes the Merc in the looks.

But, come to the interiors and you realise why the Germans are admired for their quality and aesthetics. We love the black and aluminium combination used for the cabin of the Merc. There aren't any wooden panels like in the regular C-Class, rather this limited edition gets silver-like panels that sparkle with a class all their own. The leather seats are extremely comfortable so even if you are tall or big built, you will face no problem.

The interiors of the S60 are a let-down - they can charitably be described as "Plain Jane" when compared to the eyecatching styling of its exteriors. It's disappointing actually as simplicity at its best is just not good enough for this segment. The dashboard design looks very conservative and shows that Volvo has left the cabin more or less untouched from the previous S60. The materials used also reek of mediocrity and are inferior to the ones in the Mercedes. The front seats could have been more supportive and comfortable, though the rear has enough space for three well-heeled people sitting back and relaxing.

The test of both cars is on the road. The duo will make you smile broadly as far as handling is concerned. You want to take a sharp corner? Have no fear - the steering wheel responds to the curve even as the suspensions keep the cars stable. The C and S60 are nimble in the slow-moving city traffic, but if the road deteriorates, then it is the S60 that leaves you with a jarring ride where you feel every pothole the car goes over. On the other hand, the C is all about a lush ride quality and even if you go over a ditch, there are no shockwaves coursing down your spine. One of the hallmarks of Mercedes-Benz C-Class has been ride quality and the Edition C maintains the reputation.

All this is fine but can these give you a power rush? In all honesty yes, even if both have a linear power surge. The Mercedes feels a lot smoother and refined though. And yet it is the S60 that maintains a good top-end performance while the C hits a peak and is more at ease in the mid-ranges. The explanation may lie in the S60 having superior engine power and its steering-mounted paddle shifts that allow higher revs.

The verdict: Brand or looks and features?
The Volvo S60 is the best-looking car in the segment and comes with all of the safety features, if not more than in most cars. But it lacks the brand power the Mercedes-Benz has. And even though the Mercedes-Benz Edition C is still a decent bet, it loses a bit of its sheen when it comes to appearance. It has a bullet-proof build quality, which is a bit suspect in the Volvo, and ride quality is still class leading. Many of those who drive the S60 may say that the speedometer changing colours based on the drive mode chosen is a mere gimmick, but we think it's a great touch. In the ultimate analysis, we feel that the debate is more than just brand versus looks. We would say it actually pits youthfulness against the traditional, and we plump for the S60 for its style and features. Of course, if solid engineering is what satisfies you, then look no further than the Edition C.