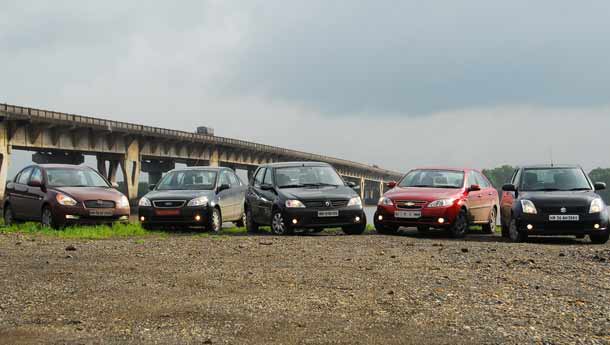 People say diesel is the new petrol. Today, diesel cars are not considered downmarket and there’s nothing wrong if your car is seen hanging around with commercial vehicles at the fuel pump. With common-rail technology going mass, the sticky fuel has become everybody’s favourite. And we now have the diesel equivalents of petrol cars for anyone who’s interested. After all, when you are getting virtually the same kind of performance as petrol and yet saving about 30 per cent on fuel costs, who’s complaining? Here then is a bunch of happening diesel cars that you just can’t ignore if you are in the market for one.

City vs highway?
It is suitably geared to handle the urban crawl, and stop-go traffic cannot scare this Franco-Romanian. As long as the highways are straight the Logan diesel will cruise happily. As mentioned above, giving it the shove means better overtaking performance. The sweet-spot in the rev counter is worth exploring when you are in a hurry – put her in third and go about the business of passing slow moving traffic. In short, you can live with this car in town and country, and it will follow its duties to perfection without any flamboyance. Not even a bit.

How about the money?
It is a whole lakh cheaper than the Fiesta, at Rs 5.75 lakh ex-showroom Mumbai. And more if you opt for the spartan base model. And for that money Mahindra Renault offers you a lots of sheet metal and glass. The top-end model gives you an airbag while ABS is not an option in any of the models. This is the quintessential no-nonsense sedan – every way you look at it.
BSM diesel rating: ****

Maruti swift DDIS
What will your neighbour think?
‘Oh, why the hell did he buy a small Suzuki? That too, a diesel?’ That is where the fun begins. He will never know that what you are driving is a segment buster that is fun to drive and is brilliantly economical too. Sure, the Swift is as common as the flu, and unlike the disease, it takes two months of waiting before you can get it. But the car that did the magic for Maruti Suzuki is an out-and-out winner for most owners in its diesel guise. And apart from the badging there is precious little that tells the world that you are having tremendous fun.

What is so cool/uncool about it?
What is most cool lies beneath the bonnet of the chubby car. The Fiat-derived MultiJet engine is a gem that can lick some petrol cars the way it delivers power, performance and economy. And yes, with its price tag, this is the cheapest car in this list – another rather cool factor. The cool quotient improves when we tell you that it is an improvement over the petrol model in many ways. Unfortunately or fortunately this is a popular car, and that means almost everybody and his aunt drives one. Nothing a white roof or a chirpy reverse horn cannot cure, what say?

Is it fun to drive?
Of course it is. Second gear wheelspins anyone? The 1246cc four-cylinder common-rail diesel develops 75 bhp at 4000 rpm and 19 kgm of torque as early as 2000 rpm. That is 10 more bhp over the Fiesta and the Logan diesels, and that too in a car that weighs way less. The 100 kph sprint is possible in 14.3 seconds and it manages a top whack of 160 kph plus. Brilliant? Exactly. More than the numbers, this car is really fun to pilot – imagine a motorcycle with four wheels and a grumpy diesel engine and you get the picture. Accelerating out of signal lights is enormous fun and the little Swift can keep pace with much bigger cars and annihilate lots of others. Motorcycles try catching up and fail as the Swift changes positively to the third cog and starts munching on three digit speeds. It is flickable, turns on its axis and fits into the smallest parking lots – who cares about rear visibility?

Good ride and bad handling, right?
Brilliant ride over the petrol car any day and that is where the success story begins. We all knew that the Swift could handle, well  add to that a stiffer front suspension that was engineered to handle the additional weight of the engine and you get a very sorted out car. With the diesel version you are not worried about potholed roads and speed breakers. You just drive through them. Try doing that in a petrol and your heart will sink with the kling-klangs that will accompany your progress. We are smitten and you have to experience it to believe it. Torque steer is an issue and you better be in lower gears and carrying adequate speeds into tight corners. Do that and you will be surprised at the brisk progress you will be making through mountain roads. Add to that a steering that suddenly feels better weighed (thanks to the additional weight up front) and you get a very involving dynamic package that goes with the character of the engine. Wow.    How about NVH then?
It is not up to scratch, honestly. This engine is loud and clear that it is being fed diesel. And the world will come to know of it the moment you fire her up. But why should you make an issue out of it when the car is giving you petrol car-like driveability and performance? This is a classic case of an unknown engine in familiar chassis – but it has given the car a great deal of character. Trust us, the Swift diesel won’t be what it is without the cacophony and the rumbling vibes that it sends through the seat of your pants. According to us, taming these will make it just another car. Actually, with that little monster of a powerplant under its hood and light weight, it won’t. Ha!

City vs highway?
The Swift diesel drives by itself in city traffic. This is no exaggeration – if you have driven a petrol-powered Swift, then you will come to know. A stronger clutch (weak point of the petrol version) means you are not worried about stop-go traffic. Gearing is spot-on for in-traffic duty where life revolves around the first three cogs. The overdrive gears take care of the modern dual carriage highways and expressways with ease. Overtaking is never an issue and it has got sufficient top speed to shrink the distances between towns. In short an extremely driveable, if slightly crude, package that you can easily fall in love with.

How about the money?
The base model Swift diesel costs Rs 4.84 ex-showroom Mumbai and the top model Rs 5.14 lakh. Order it with ABS for best results. This car deserves it. We are still miffed at Maruti Suzuki for not offering a ZXi version with the full complement of safety features like ABS and airbags and hopefully this will be addressed once the queue for the car shortens at dealerships. Getting 18 kpl out of highway driving is easy and you don’t have to be easy on the right pedal to do that. What is amazing is the consistent 14 kpl plus mileage on offer in city driving conditions with airconditioning. No wonder then that this is the most happening car in India as far as BSM goes!
BSM diesel rating:*****