Diesel City to get Honda back in the race 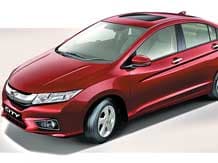 An unveiling in November and many teaser ads later, Honda Cars India launched the fourth-generation Honda City today. After Honda's  Amaze debuted the Japanese carmaker's diesel technology, i-DTEC, it is time for the City to flaunt it in India.

Once the lord of the mid-sized segment, Honda's sedan had been usurped by Hyundai's Verna. With time, the Volkswagen Vento too picked up pace and pipped the City to score more sales (please see chart). The City, now reinforced with a diesel variant, would squarely take on the market leader Verna, which accounts for one of every three cars sold in the mid-sized sedan segment.

Powered-up specs
The new City is priced almost at par with comparable variants of Hyundai Verna (chart). Honda claims the new City would offer best-in-class fuel economy with its 1.5 litre i-DTEC engine, running 26 km per litre, and the 1.5 litre i-VTEC (petrol) operating for 17.8 kmpl. The Verna offers mileage of 17.01-17.43 km and 22.32-23.05 km per litre for the petrol and diesel variants, respectively, depending on the engine option (1.4 or 1.6 litre). The City, which has sold 430,000 units since its launch in 1998, has already registered 9,000 new bookings. Deliveries of the diesel version would commence immediately, while those of the petrol model would start in mid-February. Nearly two-thirds of the bookings of the new City are for the diesel offering.

Honda had discontinued production of the third-generation City in November last year and soon after, unveiled the new City in India on November 25 for a global audience. The new City was developed at Honda's R&D centre in Tochigi, Japan following extensive market surveys in India and Asian countries.

Get back in lead
Hironori Kanayama, president and chief executive officer, Honda Cars India says, "We are entering a new phase of trying to regain dominance in the premium car segment." Apart from Hyundai Verna, the new City will compete with Volkswagen Vento, Renault Scala and Nissan Sunny - all of which are available in diesel-powered options.

The City had been available only in the petrol variant. The lack of a diesel variant had limited its share in the mid-sized segment to 12 per cent (in April-Nov 2013) in contrast to 33 per cent cornered by the Verna and 14.4 per cent held by Vento.

To fuel a faster recovery, Honda would sell in 170 sales outlets across 107 cities by March, 2014. The company currently has 159 dealer outlets in 100 cities.

Kanayama says the City would now let the company have leverage in a market where sales of diesel cars have grown significantly over the last two years: "We had a disadvantage in the diesel segment, but now with both Amaze and City with diesel versions, we will have a better play in the market".

Straddling multiple lanes
With plans to introduce two more models in 2014, Honda expects to be present in 50 per cent of the total number of segments in the Indian passenger vehicle market. Honda will launch multi-purpose vehicle (MPV) Mobilio, followed by the premium hatchback Jazz, an earlier version of which it had discontinued last year.

Geared for growth
Honda, which grew volumes by 35 per cent to sell 73,483 units last fiscal, has on offer four models in the country. It launched its first diesel offering, Amaze, in April last year. The company has sold over 50,000 units of the compact sedan.

Honda commenced a third shift at its Greater Noida facility in November to reduce the waiting period for the car. "With the start of the new shift, we would be able to produce around 14,000 units every month as compared to the earlier capacity 10,000 units. The waiting period for the Amaze will come down to about a month", informs Jnaneswar Sen, senior vice-president (sales & marketing).

Honda is looking at closing the current financial year with sales of 120,000 units. This is expected to nearly treble to 300,000 units by March, 2017. Honda has hinted at an aggressive introduction of products in fast-growing MPVs and sports utility vehicles for volumes over the next few years.