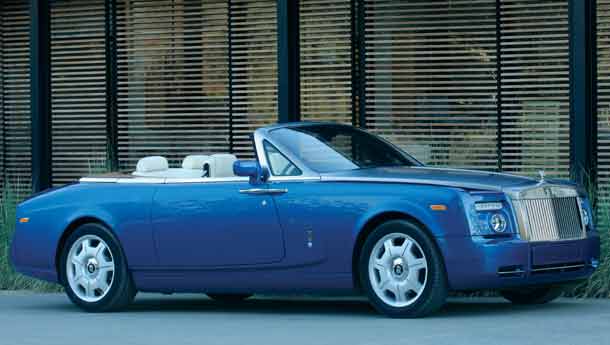 Ford Interceptor
Is this Ford’s idea of a Crown Victoria replacement for the police forces? Maybe, but it’s a bit too futuristic for the burger-chomping cops of LA, NY or even TX. After all, it has a design concept called squircle (part square, part circle!) that can run rings around fleeing thugs. And a 5000cc V8 that produces a chest thumping 400 bhp. And maybe a change of warning from ‘You have the right to remain silent’ to ‘You can
run but you cannot hide.’

Jeep Trailhawk
Being a part of the DaimlerChrysler group can be advantageous, especially when you want to go diesel. The 3000cc Bluetec diesel powered Trailhawk has hints of the Range Rover Sport, but still retains its Cherokee look and the motor’s peak power is rated at 215 hp with 52 kgm of twisting force. Then there are those massive 22-inch wheels. Wonder why Americans can’t simply adopt diesels with a vengeance with figures like those.

Chrysler Nassau
If the 300C is the current fav among bling masters, the Nassau would be a hit with the wannabe rap stars. The luxury coupé is based on the 300C, but it isn’t a slouch. Stuffed with the 6100cc Hemi V8 producing 425 hp or a 5800cc, five speed automatic, this coupe is a notchback with a rather stunning looking hind-side.

Chevrolet Volt
Bob Lutz flies an L-39 Albatross but doesn’t expect Americans to. Rather he would want them to turn stingy and drive this, the Chevrolet Volt. The electric vehicle is GM’s next big attempt at going electric after the much hyped EV1 car that went bust in the 1990s. Powered by a 3-cylinder, 1000cc engine that produces 71 bhp and runs on ethanol, the Volt’s 161 bhp electric motor is charged through either a three pin 110-volt connection or by the E-85 fuelled engine.

Lexus IS-F
So the luxury car manufacturer thinks it has what it takes to beat the M3. Really? After all, the 5000cc V8 with 400 mouth-shutting ponies on full trot can give the current M3 a real run for its euros. At least until BMW gets its 4000cc V8 M3, with a rumoured 420 bhp, some time later this year. Based on the rear-wheel drive IS 250, this hot saloon features the world’s first eight-speed automatic transmission.

Toyota FT-HS hybrid concept
Could Toyota be far behind if Honda has a sports car revival plan? Not at all. Check this, their possible Supra replacement. The rear-wheel drive hybrid two-plus-two cranks out 350 horses from its 3500cc V6, while going about keeping the environment green. Designed by Toyota’s design centre in California, the hybrid concept can do the 100 kph dash in under four seconds. Now imagine an 800 bhp tuned FT-HS with a NOS kit, bigger turbochargers, blow-off valves and a lifetime PUC certificate. Ha!

Acura Advanced Sports Concept
This could be the next-gen NSX if you look hard (er, don’t pop your eyes out). After the HSC concept a few years back, Honda might well stop all the controversy surrounding its next supercar. Powered by a V10 with more than 400 bhp, this concept has the makings of an Audi R8 or even a Lamborghini Gallardo challenger – if it becomes a production reality. Trouble is, there’s no Ayrton Senna to help develop it this
time round...

Honda Accord Coupé concept
While we get the facelifted Accord now, the Americans got a peek at what could be the eighth generation Accord. Using Honda’s Advanced Compatibility Engineering Body Structure which is already used in the Civic and CR-V, the coupe has hints of the Nissan 350Z and Alfa’s concept cars. A new V6 powers the Accord that promises even better fuel efficiency using the new VTEC management system. Now if Honda Siel obliges, will they get this engine in the next gen car with a manual gearbox please?

Audi Q7 V12 TDi
There are SUVs. And then there is the Q7 V12 TDi. Defying all norms of sanity, this 6000cc diesel monster can produce... hold your breath, 102 kgm of torque. That’s enough to pull the Sears Towers down, two times over. All in a band of 1800-3000 rpm. Not that there is a horsepower deficit. At 500 bhp, it is good enough to put quite a few autobahn stormers in their place. There are just two questions Audi needs to answer. When will they make it and how much would it be priced at?

Jaguar C-XF
With all clouds cleared about its future, the cat has more than one reason to leap with joy. The C-XF might herald the change of things to come for Jaguar. Touted to be an S-Type replacement, the Ian Callum designed four-door saloon looks superb from practically any angle. We say, Jaguar, forget the
F-Type/XK180 fiasco and just get it on the assembly line.

Mercedes GL 420 Bluetec
DaimlerChrysler used the new GL to further enhance its Bluetec technology platform for the United States. Producing 290 horses from its 4200cc engine, the Bluetec powered GL matches the Yankees’ strictest emission norms for diesel vehicles, while being frugal at the same time. Now only if the oil companies obliged and dropped the price of diesel by a substantial bit...

Volvo XC60
Everybody wants a mini SUV these days. Land Rover has the Freelander, BMW the X3, Mercedes is developing the GLK and Volvo this, the XC60. And strangely, this one looks more muscular than its bigger brother, the XC90. Why? Well, they had to just shake off their staid image, after all. The XC60 also has a 3000cc six-cylinder, flex fuel engine that uses ethanol as well as petrol. From an Indian perspective, it stands a good chance, doesn’t it?

Rolls Royce Phantom Drophead Coupe
If you own a Lear Jet and a Riva speedboat, then you better complement it with the Drophead Coupé. Rolls-Royce’ latest iteration of the Phantom, it has everything to drool about. LED headlamps, suicide doors, a pure teak wood hood cover and that gorgeous 6750cc V12. Still producing 453 horsepower, it can whisk the cigar-flaunting business tycoon and his better half to a top speed of 250 kph. There is a minor issue though. The first two years’ production of the Drophead has been sold out.

Mercedes-Benz Ocean Drive Concept
The CLS just wasn’t enough for Mercedes, so they went ahead and got themselves a luxury four-seater convertible as well. Trust Mercedes to do a good job with it. This very classy roof-cut car is based on the
S-Class and is powered by a V12 engine. Speculation is rife whether it will make it to production. We say, bring it on DaimlerChrysler!

Kia Vue Concept
Another crossover, then. With a Hyundai 400 bhp engine, this 4600cc V8 is a production engine that will find its way into the Equus, the flagship Hyundai. So what is all the fuss about? The concept runs on 22-inch rims and has more than 50 kgm of torque. But will it make it to production? Kia think so.

Hyundai Veracruz
This isn’t designed in Santacruz. No sir! The Hyundai Veracruz is European inspired, yet is a strikingly smart design, even if it has hints of the Nissan Murano. Using the same 3600cc V6 from the Azera, the Veracruz has three rows of seats, ideal for soccer moms and their pesky kids. Hyundai hopes to give the Honda Pilot and Toyota Highlander a real run for its money in the ever-so-competitive US market.